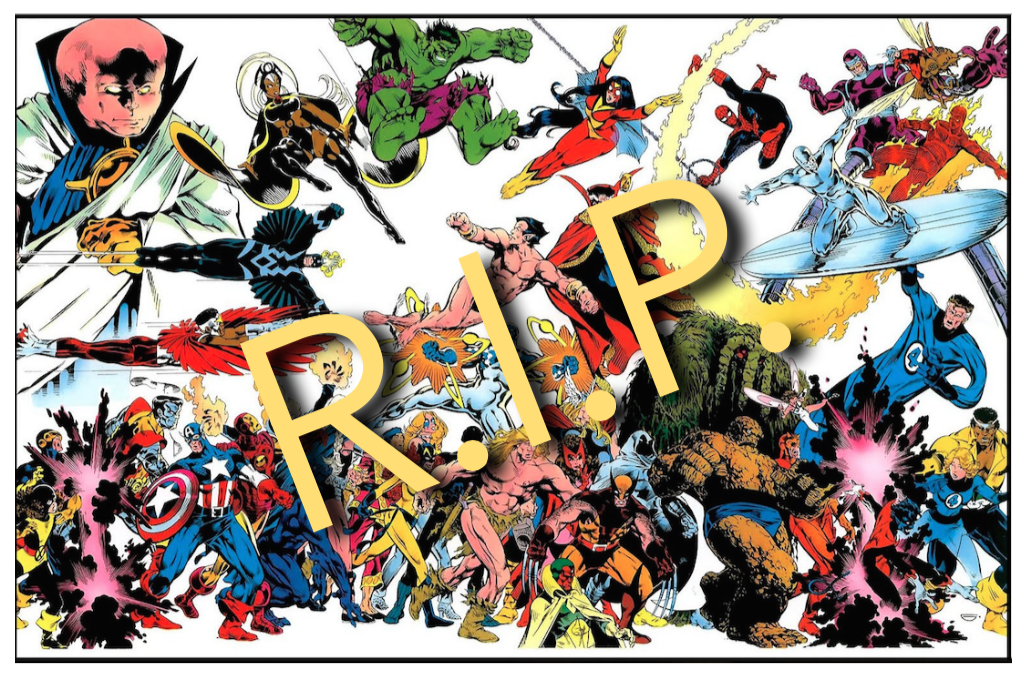 Is time for Marvel comics to die?

Lower comic sales at Disney and a SXSW panel from Marvel's Editor in Chief have led many fans to speculate that Marvel Comics could be fighting for their existence.

The comic panel in questions is a panels by Marvel's Editor in Chief CB Cebulski and Joe Quesada at the SXSW in Austin Texas.  The hour long panel is called "Marvel: From Comics to Screen" and is to focus on how the comics have effected the films.

Here is the full description of the panel:


"Marvel’s Editor-in-Chief C.B. Cebulski and Chief Creative Officer + fan-favorite writer/artist Joe Quesada lead an interactive discussion on the unprecedented vast creative landscape and content factory that is MARVEL COMICS.  Marvel’s characters have achieved international renown, and now the movies, television series, and games of the Marvel Universe are the most popular in the world  – but everything starts with an idea, and Marvel Comics is the spark that lights the fire. Heroes and villains were teamed together in an epic challenge against each other in the first ever Marvel limited series Contest of Champions in 1982 before it became one of the most successful and popular mobile games of all time.  The Guardians of the Galaxy as they were seen in the 2014 film assembled for the first time in 2007’s Guardians of the Galaxy comic book.  Iron Man and Captain America had their first Civil War in the pages of the Marvel Comics series of the same name in 2006.  Cloak & Dagger first came together in a 1982 issue of the Peter Parker, The Spectacular Spider-Man comic book.  Are the next breakout stories of film, television, and gaming happening in the pages of Marvel Comics right now?  Hear from two of the Marvel Comics’ biggest story-crafters on what it’s like to lead the way in the Marvel Universe!"


Some have begun to argue that the panel is basically the leaders of Marvel comics to justify their existence to Disney excutives.

The current conspiracy seems to land mostly with a article by Jude Terror a click pait provocteur at Bleeding Cool.  You can find his post at: https://www.bleedingcool.com/2019/03/01/joe-quesada-c-b-cebulski-survival-comics-sxsw/ Like most Jude Terror articles I read I think its 90% hype and 10% fact.  I leave asking myself why did I just waste time reading this.

Is there any truth in any of these rumors that Marvel comics is going to die?  Yes and No.

First, comic sales are down.  Marvel was doing very well from a sales perspective in 2016 but has had a rough 2017 and 18 mostly due to a backlash over Hydra Cap and due to a slow down in Star Wars comics.  The slow down in Star Wars merchandise has been felt at Disney through out its entire consumer products industry.  That is not specifically a Marvel Comic issue.

Marvel comics sale drops also effect the entire industry.  Marvel being a flagship publisher tends to bring buyers into the stores.  Its lower sales have in turn led to lower comic sales throughout the industry and also have likely ended a few comic stores.

That said Marvel and the comic book market have had similar declines over the past 20-30 years.  Ever since the 90s comic bubble burst they have dealt with similar lulls.  I would say they are not yet dead but do need to start finding comics that get their fans into the stores.

There is also a rumor that Disney could close the comic division and license them out to a third party comic maker.  There is one huge problem with that idea though.   If Marvel the flagship comic publisher were to go down it would take the entire industry with it.  There would be no one to license comics to at that point.  A similar argument is that comics could be distrubuted digitally or through trades.  While both channels are growth prospects from the industry  I don't see those channels replacing the floppy anytime soon.

The definite no in my book is that the CB Cebulski panel has something to do with Disney's plans.  If CB wants to talk to Disney he will talk to Disney through a myriad of internal channels.  He does not need to go to the public at comic con to make this appeal.  Likely CB just sees the panel as another way to sell comics and bring fans from the films into the comic book stores.  I see this strategy as smart.  The blockbuster films of Marvel have been a vastly under leveraged source for the company to sell comics and get new fans with.  Its high time that Marvel begins to utlisize that connection however they can.

Joe Quesada also blew away the idea that panel has anything to do with Marvel's survival on his twitter.


Must be a slow news day. Ladies and gents I give you the dumbest comics conspiracy of the week. https://t.co/ZGpx4EuWKK

All in all, comic sales are not in a great spot but saying that Marvel is dead is still very premature.

Post by Aeon River
You can blame Aeon River for this:
https://www.facebook.com/aeon.river.54