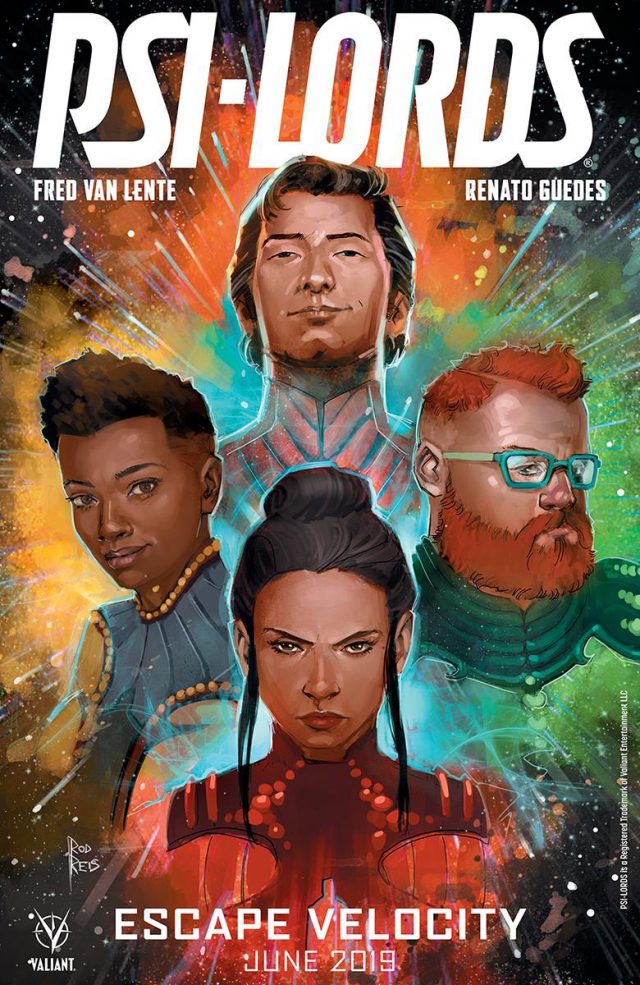 
Fred Van Lente is bringing a scifi series called Psi-Lords to Valiant.  The new series will hit comic book stands June 19th.  The series has been hinted at within the phenomenal book XO-Manowar.

February 13, 2019 (New York, NY) – “FINALLY, THE PSI-LORDS HAVE COME BACK TO THE VALIANT UNIVERSE!” exclaimed Senior Editorial Director Robert Meyers. “After years of teases, red herrings, and misdirects, we are so excited to announce one of the most requested books from Valiant: PSI-LORDS.”

“Fred Van Lente is doing what he does best: mind-bending sci-fi with heart and humor,” said Meyers. “Renato is the perfect artist to bring this story to life, blending intricate storytelling with cosmic craziness that is going to blow you away.”

In PSI-LORDS, four amnesiac spacefarers awake in an unfamiliar place, setting off a galaxy-bending adventure with extreme consequences.

“PSI-LORDS is a Lost-style adventure in that it involves a motley band of strangers trying to survive in the unknown, exotic Gyre – not just endure the physical hazards, but also the various factions on it warring for control,” said Van Lente. “So expect sci-fi action, expect Westoros-esque political jockeying, expect the relationship between the characters to grow and change as they try and navigate this bizarre environment – all at the same time trying to figure out what its true nature is, and, of course, how the hell they’re going to get back home.”

PSI-LORDS is a great series for new readers to jump on, but Van Lente hints that longtime Valiant fans will be rewarded.

“Many X-O Manowar readers have seen hints to what’s really going on already,” he teased. “The secret the Gyre holds, once uncovered, will jeopardize the entire Valiant Universe – and has the potential to suck every hero and villain in it into its orbit.

To learn more about PSI-LORDS, be sure to follow Valiant Entertainment on all of its social media channels!

PSI-LORDS is the latest release from Valiant Entertainment, a wholly owned subsidiary of DMG Entertainment. Since acquiring the publisher in early 2018, DMG Entertainment has placed a premium on developing and expanding upon Valiant’s publishing arm, continuing to build out its vast universe of characters. DMG’s vision to take Valiant’s library of titles to new cinematic heights has only just begun, from publishing to feature films, television, gaming, theme parks, and beyond. Valiant’s first feature, “Bloodshot” (Sony Pictures), starring action superstar Vin Diesel, debuts early next year, with projects featuring Harbinger, Faith, and Quantum and Woody on the horizon.

Valiant Entertainment, a subsidiary of DMG Entertainment, is a leading character-based entertainment company that owns and controls the third largest library of superheroes behind Marvel and DC. With more than 80 million issues sold and a library of over 2,000 characters, including X-O Manowar, Bloodshot, Harbinger, Shadowman, Archer & Armstrong, and many more, Valiant is one of the most successful publishers in the history of the comic book medium. Valiant consistently produces some of the most critically acclaimed comics in the industry and has received numerous industry awards and accolades, including a Diamond Gem Award for Comic Book Publisher of the Year. For more information, visit Valiant on Facebook, Twitter, Tumblr,Instagram, and ValiantEntertainment.com. For Valiant merchandise and more, visit ValiantStore.com.