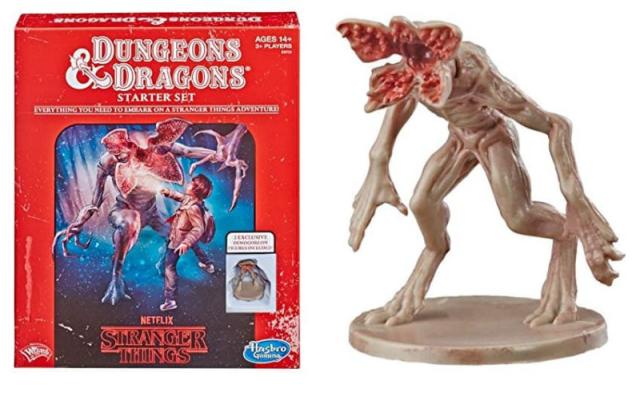 Hasbro has revealed a new starter set and its one that makes total sense.   Dungeons and Dragon's has exploded and its something that Hasbro pointed out in their latest earnings call.  They saw D&D and their Magic the Gathering assets as being major growth drivers and that they have never been bigger.  This is very true to those who look around online and see a bevy of D&D blogs and shows sprouting up all over the place.

While many things may have factored into the sudden resurgence of D&D, shows like Critical Role,  digital fatigue, nostaglia of 80s nerds, one major event is also mentioned by many and that is the opening scene of Stranger Things that introduced the main characters while they were playing D&D.  The game they were playing also began to factor increasingly into the plot.  The creature they battled in the game was the Demogorgon and that fantasy monster seemed eeriely similar to the creature from the Upside down that they began to battle.

Hasbro mentioned plans to further grow D&D and one of those ways is now clear.  They have created an affordable $25 dollar starter kit that features the same quest that the children were on, their character sheets and the Demogorgon itself.

Which is still very creepy and scary.  However, I can see how many players both new and old who watched Stranger Things may want to take on the creepy Demogorgon used in the show.  Its become a classic film creature all its own.  Especially as it chewed down soldiers in the school headed toward its climatic battle with Eleven.

The game comes with a rule book my guess is that it is the 5th Edition rule book.  It also includes a set of dice which is always good and you get the adventure that the kids were playing called; "Hunt For The Thessalhydra".  I do not know much about this adventure other than it obviousily features the Demogorgon as an adversary.  Also it does sound really freaking cool.

For those of you that don't recall the opening scene of Strangers Things well here you go.  You can relive the kids battle with the Demigorgon:

The Starter Set is currently going for $25 dollars on Amazon:

From Amazon's Description
Here is what all the items in the set look like:

I am thinking about getting this.  Not sure if I will be to integrate into Toylab house D&D group the Companions of the Silver Apple or not.  However, if I do I will show more pictures and do a more thorough review.  Until then I think this is a really cool idea and give kudos to Hasbro for coming up with it.  I think its a really smart way of expanding D&D even more by using the Stranger Things brand.

My only caution with this product is that the other starter set features Lost Mine of Phandelver and it is a phenomenal starter adventure that I have really enjoyed using.  Still $25 dollars for anything D&D is a good value and I can see many D&D fans getting both.  I am certainly considering it.