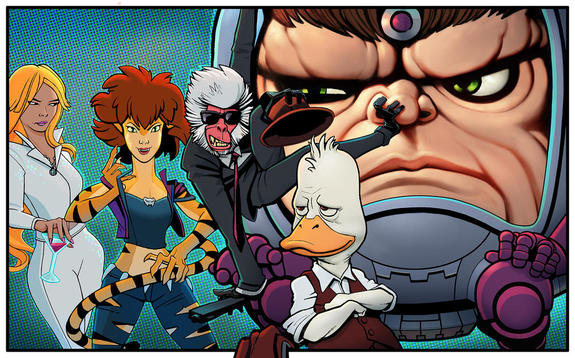 Marvel has taken a group of the their more colorful characters and added them to project called the Offenders.  The characters of MODOK, Hit Monkey, Howard the Duck, Dazzler and Tigra are going to recieve 4 individual shows and a 5th show, "The Offenders" will see the characters come together as a team.  The format is seems to be poking fun at the Marvel Netflix show that brought together the separate heroes together to form the Defenders.

Marvel has enlisted a well array of Comedians to bring the different animated shows to life with Kevin Smith taking on Howard the Duck, Chelsea (Didn't know she was still alive) Handler taking on Dazzler, Patton Oswalt taking on MODOK and Hit Monkey will come from writers osh Gordon and Will Speck.

The animated shows will appear on Hulu.  This is marks one of the first projects started between Marvel and Hulu.

Can be found on Marvel at: https://www.marvel.com/articles/tv-shows/marvel-the-offenders-modok-hit-monkey-tigra-dazzler-howard-the-duck-hulu-animated-series

In “Marvel’s M.O.D.O.K.,” M.O.D.O.K, an egomaniacal Super Villain with a really big head and a really little body, struggles to maintain control of his evil organization and his demanding family. “Marvel’s M.O.D.O.K.” comes from writers Jordan Blum and Patton Oswalt, with Blum, Oswalt and Jeph Loeb serving as Executive Producers.

“Marvel’s Hit Monkey” tells the tale of a wronged Japanese snow monkey, mentored by the ghost of an American assassin, as he cuts a wide swath through the Tokyo underworld in this darkly cinematic and brutally funny revenge saga. “Marvel’s Hit Monkey” comes from writers Josh Gordon and Will Speck, with Gordon, Speck and Jeph Loeb serving as Executive Producers.

Finally, nobody asked them to, and we’d be better off if they didn’t, but M.O.D.O.K., Dazzler, Tigra, Hit Monkey and Howard the Duck are all forced to team up in order to save the world and certain parts of the Universe in “Marvel’s The Offenders.” Jeph Loeb serves as Executive Producer, while writers and additional Executive Producers for the project will be announced at a later point.

“A giant head. A monkey. A tiger lady and a disco queen. And the duck. Brought together because no one else could but Marvel Television on Hulu. M.O.D.O.K., Hit Monkey, Tigra & Dazzler and Howard the Duck will form a team no one asked for -- The Offenders (and wait until you see who the Team Leader is!)! We have such tremendous talent bringing amazing adult animation that's fun, fresh and fantastic. We're so excited for what's to come!" exclaimed executive producer Jeph Loeb, Head of Marvel Television.