Marvel's Conan the Barbarian #1 and 2 getting 2nd Printing! 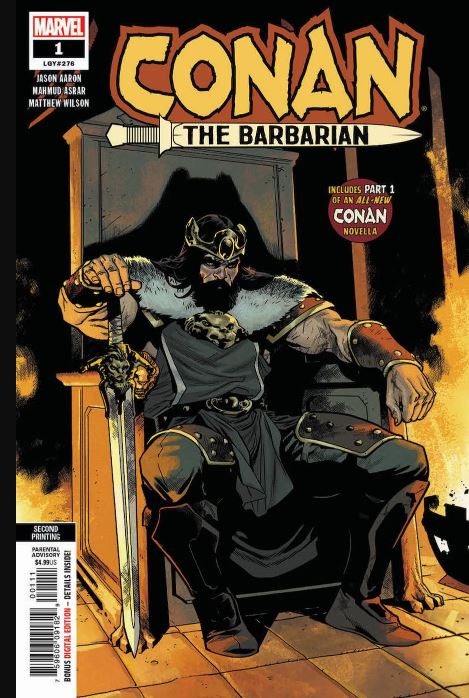 Marvel's Conan the Barbarian #1 and 2 getting 2nd Printing!

I was not sure how well Conan at Marvel would be recieved.  Apparently, at least initially it is going to do very, very well.

Know, oh prince, that in the year 2019, the first two issues of CONAN THE BARBARIAN have gone back to print with CONAN THE BARBARIAN #2 selling out at Diamond before hitting stores! The world has spoken, and acclaim for the sword-slashing hero’s return to Marvel is triumphant!


With Mahmud Asrar’s tantalizing art, Matthew Wilson’s sensational colors, and Esad Ribi?’s stunning covers, and the start of Jason Aaron’s epic tale, CONAN THE BARBARIAN is a debut you will not want to miss. Newsarama calls the book “the best of both worlds - not only is it a solidly entertaining introduction of the Cimmerian to a whole new audience of readers, but a reverent adaptation that acknowledges the wealth of material that came before it” – and praise is high for the barbarian hero!

“Conan is back home and better than ever. The sword and sorcery are top notch and the first issue is like a love letter to fans new and old. It’s hard not to come away from this issue and not be hyped.” - AiPT!


“Hail to the King! If you are a fan of Conan or just a casual sword and sorcery fan, either way, you will find this a good read. Grab this book; ‘and if you do not listen, the HELL with you!’ ” – Monkeys Fighting Robots


“Marvel Comics has assembled the perfect creative team for a new era of Conan.” – Comicbook.com


Don’t miss the comic IGN is calling “a mighty debut for the character as he returns to Marvel Comics” and your chance to jump in on all the action when CONAN THE BARBARIAN #1 and #2 returns to comic shops for a second printing, featuring beautiful new variants with art by Mahmud Asrar and Matthew Wilson!