I know a Guy Rule in D&D 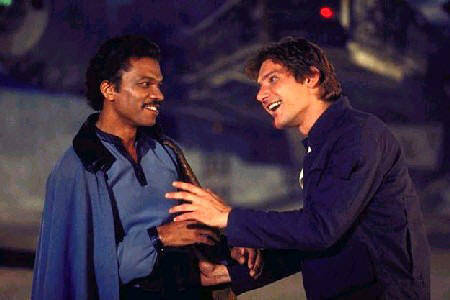 I know a guy Rule in D&D

One problem with D&D is that the Dungeon Master has a lot of power and responsibility for world building but the players themselves have little.  This means that if the players want to engage in world building and creating other npcs beyond themselves they are very limited.  Really they have no power other than asking the DM to create the character for them.  Depending on the DM this may or may not happen.

David Nett from Geeks and Sundry created a house rule when he plays D&D that players can create an NPC (A non player character) in the game by saying "I know a Guy".  The player then passes off information on who this person is to the DM.  The player then rolls a charisma check to determine whether this NPC likes or dislikes the player's character.  This allows for a certain randomness, and vibrancy to exist in the world and it also gives the players a chance to add their own characters into the world around them.  Its a simple, and clean way to do this.

The Rule is based off the meeting of Lando Calrisian in Empire Strikes Back.  In the film Han Solo and crew are on the run and decide to dock in Cloud City on Bespin.  He explains the choice of going their to his crew by explaining that he knows a guy on Bespin.  While he lands his ship he does not know how he will be recieved by Lando right up until the last moment.  Lando could be a friend, or his worst enemy and Han is not quite sure.  When players use "I know a guy" rule they also will not know whether the character they are creating is going to like them, or hate them until the last moment.

I think this rule is brilliant and will be introducing it to the Companions of the Silver Apple campaign later next month.  We will share NPCs created in our campaign and it how it all worked out.


D&D Store:
Check out these cool D&D minatures for the character you create using the, "I Know a Guy" rule.


Because a few ppl have asked about my house rule, “I Know a Guy:” it’s meant to create that moment in ESB when Han decides he can go to Lando for help, but isn’t 100% sure how Lando will actually receive him: 1/ #dnd
— David Nett (@davidnett) March 27, 2018

In any situation (where it makes sense), a PC can declare “I know a guy,” and then quickly sketch that NPC & the relationship. Fewer details are usually better - that leaves room for the DM & PCs to play. 2/ #dnd
— David Nett (@davidnett) March 27, 2018

Upon declaration, the NPC exists. Then, when the PCs try to interact w the NPC, the player who created that NPC makes a Charisma roll to see how the NPC reacts. Depending upon the situation, the DM may decide advantage/disadvantage applies. 3/ #dnd
— David Nett (@davidnett) March 27, 2018

I’ve found this simple and very loose mechanic invites players to create critical NPCs AND continue developing (revealing) backstory as they play. Now it belongs to the world (if you wanna try it). 4/4 #dnd
— David Nett (@davidnett) March 27, 2018