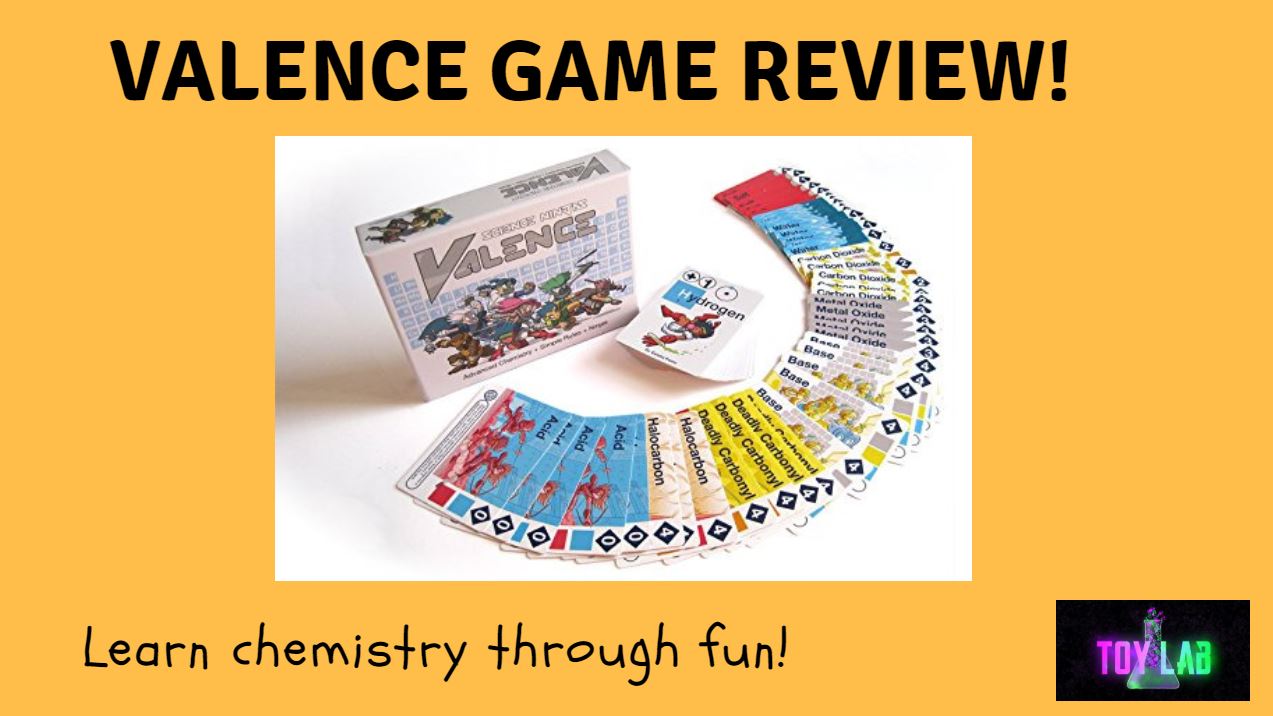 My brother is a Chemical Engineer which means like me he is a nerd.  He also like me is a father who likes to find toys and games that help teach higher concepts through the act of play.  He introduced me a card game called Valence Science Ninjas a game that teaches chemistry concepts through Ninja characters.  We played the game during Christmas family festivities and had a lot of fun.  As a chemical engineer he is very aware of the concepts the game is teaching.  However, I have not had chemistry since my junior of High School in 1999!  That said the game mechanics are very easy to understand, the art in the game is very fun and also helps learning how to play. 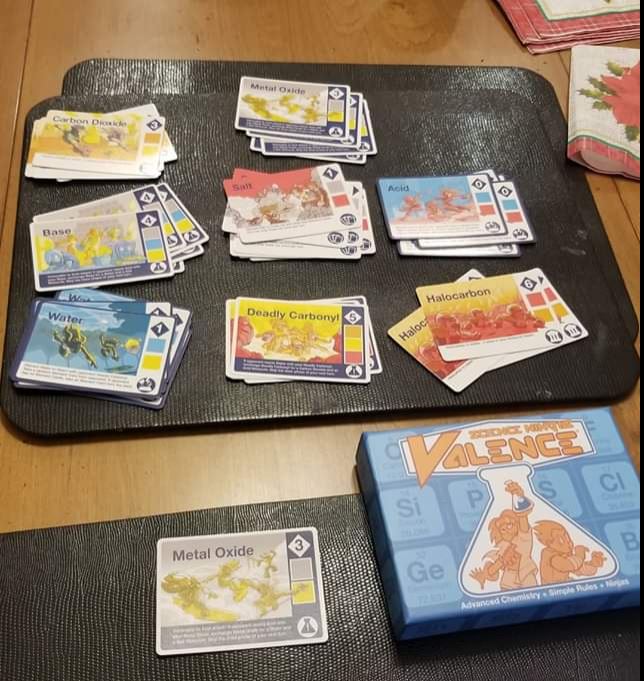 I was up playing the game very quickly, there was no chemistry refresher required.  In fact I would say there is no chemistry knowledge required to play the game at all.  The game sets up fast, and you learn how to play it fast.  You start with a hand of cards called elements each has a number score -1 or +4 and these element cards need to be combined with other Elements to equal a sum total of 0.  Each element card also has a color associated with it.  Based off the color combinations that you can make you can spend them to purchase molecule cards.  The Molecule cards have points on them or special powers.  The goal is to get enough Molecule cards that have a point total of 10.  The first player to get 10 points wins.

The really cool thing is that though the game is simple its actually teaching something that is complicated.  The concept of Valency.  If you have been through High School Chemistry you might remember that the class starts out with simpler straight forward concepts like Melting and Boiling points.  However, as you move deeper into the year you begin to enter more complicated terrain of how elements combine to form molecules.  All of sudden you find yourself looking at electron rings, and math equations trying to determine what combination of elements will form a stable molecule.  This is the concept of the Valency.

How to Play Valency:


The core concept being taught through the game is Valency


Valency = valency of an element is a measure of its combining power with other atoms when it forms chemical compounds or molecules.

As I have said my chemistry is rusty but as I played I became increasingly comfortable with how many of this element can join with another to form a certain molecule.  Through playing a game these combination became almost natural.  In the end I found myself wishing I was in chemistry because the game was taking the complicated and making it simple.

On top of that, the game is a lot of fun.

The game includes backstories and lore on the characters (The Ninjas) that appear in the game.  There are also and I love this comics that add further to the lore of the game.  The comics also teach a variety of science topics using the Ninja characters of the game.  You can find the comics at the link below check it out.

Web versions of the comics have some animation to them and are free.  They are perfect to read on a a tablet.


Toylab Rating: 10 out of 10!
- Valence gets a score 10/10 Test Tubes of Awesomeness!  We highly recommend this game for anyone approaching a chemistry class to help learn the basics.  Though the game should not be limited to that population much younger kids can pick up the mechanics of the game and start playing.  They say that the requirement to play the game is to be able to add low numbers to 0 and I would agree with that statement.


Get yourself.
Christmas is over so now is the best time to find good deals.

There is also a Valence Plus version.  I have not tried this yet but would like to.  It looks like the regular game but with more options for Molecules that you can create: