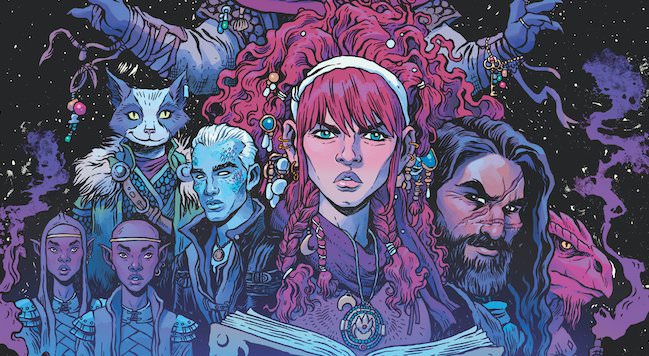 Despite being a rabid D&D fan I missed out on this news.  I began to run into some art that looked awesome and I said what is this.  There is very cool looking D&D comic coming out this Feb.  Tess Fowler art really lends itself to the D&D setting.  You should check out her twitter for both art on this project and for art she has released for Critical Role.   Its really cool to see someone who is a big D&D fan doing art for a D&D series.

Can't wait for this to hit shelves this Feb!

D&D Comic Store:
Here are more D&D Comics to check out from Amazon!

SAN DIEGO, CA (October 25, 2018) – The Forgotten Realms, the fantasy setting beloved by Dungeons & Dragons fans the world over, is the centerpiece for IDW’s all-new comic book miniseries, subtitled A Darkened Wish. Debuting in February 2019, the five-issue series will be written by B. Dave Walters with art by Tess Fowler.

In A Darkened Wish, years of hard-fought peace in the Sea of Swords are rent asunder, and legendary heroes must return to the region to defeat an unconceivable foe! Join Helene, a young wizard from the streets of Mintarn, and her friends as they grow from raw recruits to battle-honed warriors.

B. Dave Walters says, “I’ve been adventuring in the Forgotten Realms for a long time and having the honor of contributing to that world is incredibly exciting. I can’t wait to show the fans the power and intensity of a truly epic D&D story!”

“I have dreamed of making Dungeons & Dragons comics since I was twelve years old, but A Darkened Wish is beyond anything I could have hoped for,” says Tess Fowler. “Working with B. Dave Walters on this project is the coolest.”

For information on how to secure copies of the Dungeons & Dragons: A Darkened Wish miniseries, please contact your local comic shop or visit www.comicshoplocator.com to find a store near you.


Art
Some sneak peaks of art for the series have appeared on the Twitter account of Tess Fowler you can check those out below:


Pre order your copy of Dungeons and Dragons: A Darkened Wish today. ❤ A new DnD comic from me and @BDaveWalters from @IDWPublishing and @Wizards_DnD Colors on covers by @TBonvillain Don't miss your chance to get to know this band of mercenary sweethearts. pic.twitter.com/1yvIcEu7gE
— Tess Fowler (@TessFowler) December 16, 2018