LAST TIME
The Companions rescued a Griffin Knight from the bowels of a goblin cave.  However,  they were unable to locate their kidnapped patron Gundren Rockseeker who was taken to a new location.  As the Companions spent the night in Town they had a visitor.  Coming to Anorak in a vision the god of Wizards Azuth warned that the cosmos was alight in conflict with the gods of Knowledge  facing off against the god of Maddness.  Their party had now entered an epicenter of the conflict with L'lyssa becoming herald of Mystra the goddess of magic.

Through Azuth, they learned a terrible truth.  Someone had managed to kill the goddess of Magic.  It was only through their bizarre actions in Neverwinter that the goddess had recomposed herself.  Worse of all, Cyric god of maddness has sent his own herald an immortal minotaur to slay the party called The Apex.

When Anorak asked if there were any help that Azuth could provide. Azuth simply told him where to find an enigmatic copper box.

The Companions currently Include L'lyssa the Halfing Thief, Anorak the Elf Wizard, Percy the Human Fighter, Kalisia a mysterious bard, and Kat a human fighter with adeptness in archery.  They are about to be put to the ultimate test.

The group began by discussing the news from Azuth and deciding what to do next.  They decided to try to build up Mystra doing some actions in and around town.  First they asked the local Daran Edermath to build a shrine of Mystra on the ground where his Wizard friend's store had been.  They decided the magical ruin would make a good place to build a shrine for a magical goddess.  They also promised to take care of the Nine Eye Cult that had killed the local wizard.  Daran was quite please with this and promised to build a fine shrine to the goddess of magic.

Hearing that the cult had a leader at the Old Owl Well the group headed that way.  Along the way they encountered a large group of people who seemed to be forced to kneel and listen to as a mad man prosletizing before them.  The man was ordering people to read from a bizarre book he held aloft.  It became pretty clear that group had managed to stumble right into part of the Nine Eyes Cult.  The head cultist was attempting to make the group star into a large grimoire book that he was holding over his head.  The cultists were bringing a woman up to the book just as the Companions sprung into action. 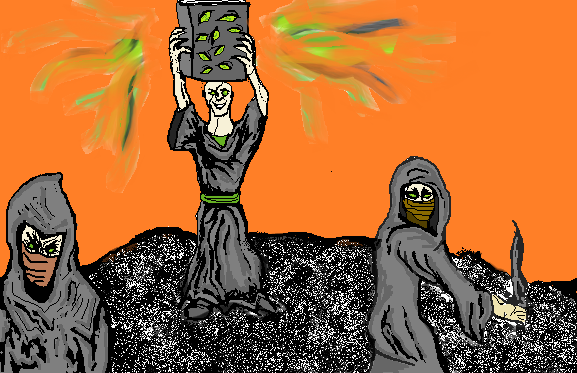 L'lyssa, Percy and Kattie all launched attacks on the Cultist guards all but brining them down. Kalisia blasted the head Cultist with Dissonant Whisper melting his brain and dropping him dead.  The group carefully and wisely put the Nine Eyes Grimmoire into a bag without looking at it.  The crowd of people were refugees from the North who describes growing influence of maddness cults.  L'lyssa told the crowd that she was the herald of Mystra and that it was through Mystra they had been saved.  She told them to devote their lives to the goddess of magic and to go to Phandalin and help build the shrine of Mystra there.  The people were in awe of the hand print on L'lyssa face, they were also happy to have been saved.  They seemed to head toward Phandalin new devotees of Mystra.

After this two of the fingers on L'lyssas face lit up with energy.  Apparently, Mystra was pleased.

Seeing the gravity of the situation with the maddness cult the group renewed their quest to head toward the Old Owl Well.  At the well they found a necromancer protected by several zombies.  The group did a good job at sneaking up on the ruins and scouting out the situation.  They could see several zombies and a tent they presumed to house the necromancer.

The group did not spend time socializing with the Necromancer after seeing the fruits of his cult in Phandalin and on the road they simply wanted to end the threat.  They then set in motion a brilliant plan to get to the Necromancer quickly.

Anorak used presitigation to great a distraction that pulled away the necromancer's zombie guards.   Zombies seeing fire and smoke slowly muddled their way away from the well.  Meanwhile, Percy, Katti, and L'lyssa sneakly entered the ruined complex.  Once they had the Necromancer in their sights they opened fire unleashing a barrage of surprise attacks that the Necromancer without his guards could not recover from.  He went down swiftly and hard, being split in half by Percy's axe.

In the necromancers possession they found a magic map that curiousily showed a minotaur moving slowly toward their current location.  The companions took the map to be a magic marker of the location of the Apex Warrior of Maddness that is hunting them.  They also found a stock pile of the vile books of the nine eye cult.  Apparently, the books had been originating with the necromancer.  The group burned the books.    If the companions had not interfered many of evil books would have been used in the countryside no doubt growing the Nine Eyes cult.  For now it seemed that the Nine Eyes Cult was done in the area.  It also seemed that the Necromancer had been using the zombies to dig into a ruin beneath the well.  However, the companions investigations into what he could have been searching for turned up empty.  (Perhaps a Mystery for another day!)

Once again, L'lyssa was rewarded by Mystra and the final finger lit up on her face with magical energy.

The Companions felt happy as they turned to head back toward Phandalin.  The Nine Eye Cult had been seemingly dealt a serious blow by the Companions of the Silver Apple that day.  However, they could not know that they would find that their quest about to take a turn for the very worst.

Next for the Companions.......Battle of Phandalin! 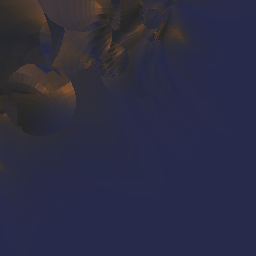