The Battle of Phandalin - Ch 9 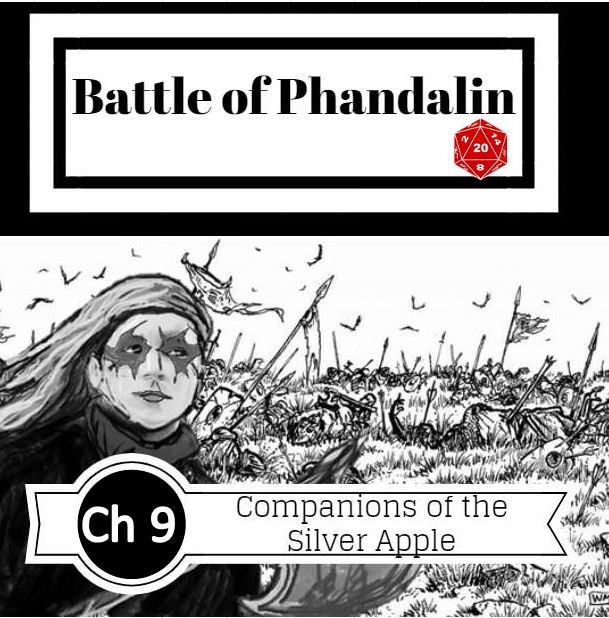 The Companions of the Silver Apple are the D&D group of the Toylab blog.  This is a log of their adventures!

The Companions of the Silver Apple are still searching for their kidnapped patron, Gunderen Rockseeker.  They did manage to rescue his bodyguard, a griffin knight named Sildar Hallwinter.  While the companions continue to search for Gunderen they have become embroiled in a battle between the gods of knowledge and the gods of madness.  The goddess Mystra has made L'lyssa her herald and now the gods of madness are coming for the party.

Through Azuth, the god of Wizards, they learned a terrible truth.  Someone had managed to kill Mystra, the goddess of Magic.  It was only through their bizarre actions in Neverwinter that the goddess had been able to recompose herself.  Worst of all Cyric, god of madness, has sent his own herald, an immortal minotaur, to slay the party.  Azuth also has provided Anorak with a mysterious Copper box.  Above all they are told to aid Mystra in any way they can.

The town of Phandalin itself seems to be in chaos.  Brigands called the Red Brands seem to run the town's government. A madness cult called the Nine Eyes, which killed the town’s only resident wizard, roams the countryside.  The Companions dealt with the Nine Eyes first.  Killing a pack of their members and then their apparent leader, a Necromancer named Hunam Kost.  The companions found a magical map showing the location of the Apex, the herald of madness.  They also found many magical evil tomes that the Nine Eyes were using to brain wash people into fits of madness and into joining their cult.  With the local network of the Nine Eyes destroyed the Companions return to Phandalin happy with their progress.


The Companions currently include L'lyssa the Halfing Thief, Anorak the Elf Wizard, Percy the Human Fighter, Kalisia a mysterious bard, and Kat a human fighter with adeptness in archery.  They are about to be put to the ultimate test.


D&D Dice Store
Check out these cool Dungeons and Dragons Dice!  Get the right set for your character.


The companions travel back south toward the town of Phandalin without incident.  They travel for three days eating well off the hunting and gathering skills of Kat.  On the third morning they are in close range to Phandalin and begin to laugh as they begin imagining relaxing in the town's Stone Hill Inn.  They are also eager to see how killing the cult and sending refugees will aid the cause of Mystra in the town.

As they approach the town they hear screaming.  Women and children begin running through the woods toward them.  They try to stop them to ask what is happening but they are all too terrified to answer.  A halfing warrior woman and a few others appear caring spears and makeshift shields.  They seem to be battling creatures in the bushes.  Their spears are covered in blood.

L'lyssa recognizes the woman her as her Aunt Quelline.  The two make eye contact and both take a moment to smile.  It has been months since they have seen each other.  Quelline begin to retreat toward L'lyssa but as she turns she is pelted by 20 arrows originating from the woods.  She falls to the ground in a bloody heap. 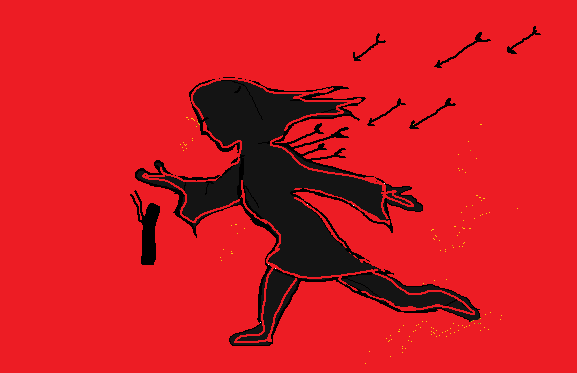 As L'lyssa rushes to her aunt the rest of the Companions scan the forest.  Three goblins become visible.  There seem to be more beyond them.

The group begins to pick off the three goblins.  They are joined by some of the lightly armed townsfolk.  They recognize some of them as refugees they had saved from the Nine Eyes cult.  Their makeshift shields are emblazoned with the symbol of Mystra.  They seem hopelessly overmatched as a group of 20 goblins becomes visible beyond the three goblin scouts.  This group marches orderly with a large hobgoblin in charge.

The companions roll for initiative.  With Kat going first, Anorak second, Kalisia and Percy third. L'lyssa, after finding a letter on her aunt, goes fourth.   The group decides to go after the immediate three and have some success but quickly realize that they are about to be blasted by a huge swarm of goblin arrows.

Kat and Anorak take down one goblin. 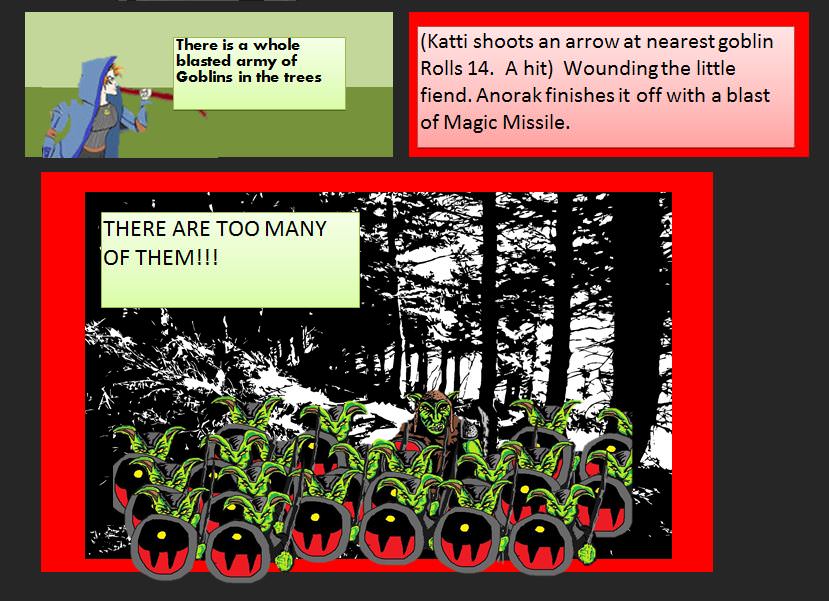 Percy and Kalisia manage to take down another goblin.

However, the remaining band of goblins, 20 in number, prepares to open fire on the Companions with their bows.  The sheer amount of arrows getting set to come the Companions way promises to be lethal.  L'lyssa looks up from her dead Aunt and, in a rage born of sorrow, calls forth one of the favors of Mystra.  She uses a favor to call forth Evard's Black Tentacles a spell far out of her level but given access to her by her Hand of Mystra.  One of the lit fingers on her face, that represents how many favors she has, goes dark.  Four favors of Mystra remain… 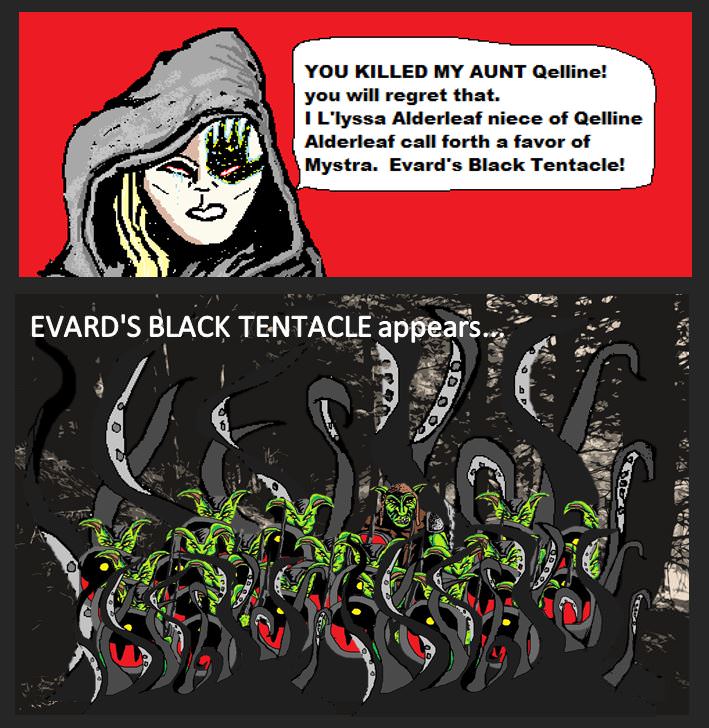 The black tentacles from the spell burst from the Earth and quickly begin tearing apart all of the entrapped goblins.  Only 2 wounded goblins and the Hobgoblin manage to escape and they are quickly dispatched by the Companions.

The Companions then see Daran Edermath, the elf they had asked to begin building a shrine to Mystra when they were previousily in town.  He appears with a spear and one of the makeshift shields bearing the mark of Mystra.  "Thank Mystra you are here!", he exclaims as he sees the group.  He then tells the group how a group of goblins, led by a huge Bug Bear, have attacked the town from one side while the Red Brands have attacked from another.

"The bastards are working together!" He spits in disgust.

He explains that the miners in the south of town were holding their own against goblins there and that Sildar had organized the town members in the city square against the Red Brands.  Sildar was being aided by two mysterious strangers, a Dragonborn and a frighteningly gloomy elf.  Daran and Quellin had been ordered to use the newly formed Mystra militia to evacuate the women and children but they had run right into another pack of goblins.

"I will do what I can for the children, please go to Sildar, Save our town!  For Mystra!"  With that Daran fled into the wilderness following after the other evacuees.

The companions made their way to the center of town.  There are barricades and members of the Mystra militia battling Red Brands there.  The streets are littered with dead but to the Companions happily note that most of the fallen are wearing red cloaks.  Mayhem ensues with large explosions rocking the south of town.  Sildar strides forth from the chaos in the town center. He smiles as he sees the companions and as he haughtily shakes rivulets of blood off his sword says.  "Good to see you."

"We have the Red Brands under control but we won't be able to stop that."  He points at a large group of goblins approaching from the east.  To their rear is a huge Bugbear with several Hobgoblin body guards.  "It’s that bastard Klarg!"  As Sildar says this, an inhuman chant becomes audible.

"Kill that bastard and we can then work together on these Red Brands." Sildar yells as he turns to return toward the battle against the Red Brands.

The companions move toward the goblins and are met with a huge volley of goblin arrows.  Percy manages to shrug off some of the arrows but his health is cut down to almost nothing he angrily uses his second wind to recover.  The other heroes are all injured but all manage to survive, a potion of healing used in the process.

L'lyssa decides to once again use a favor of Mystra and calls forth Evard's Black Tentacles.  Another finger on her face goes dark and now only three fingers remain lit with the powers of Mystra.  The divine spell does the trick though and only Klarg and his hobgoblin bodyguards remain. 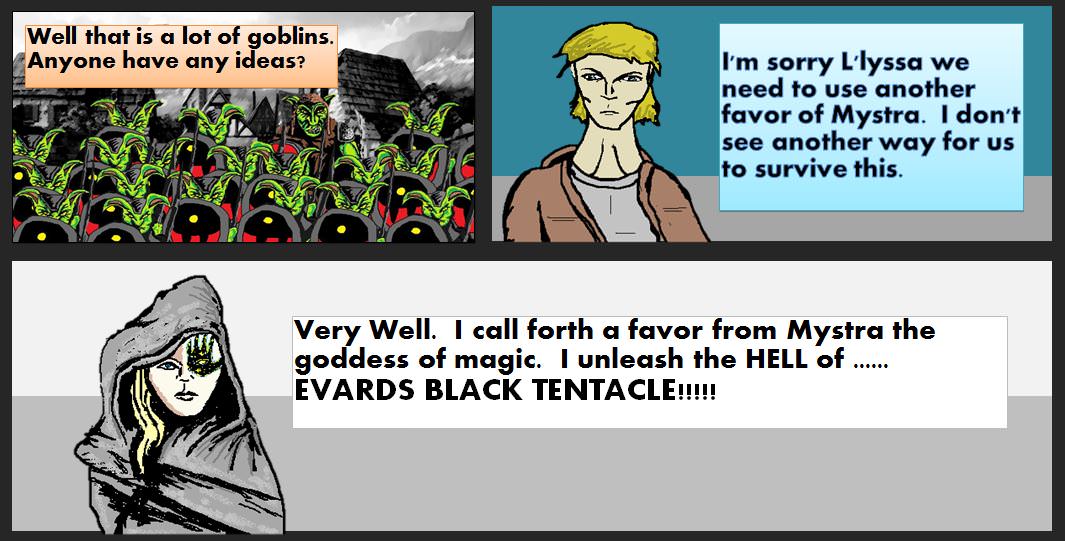 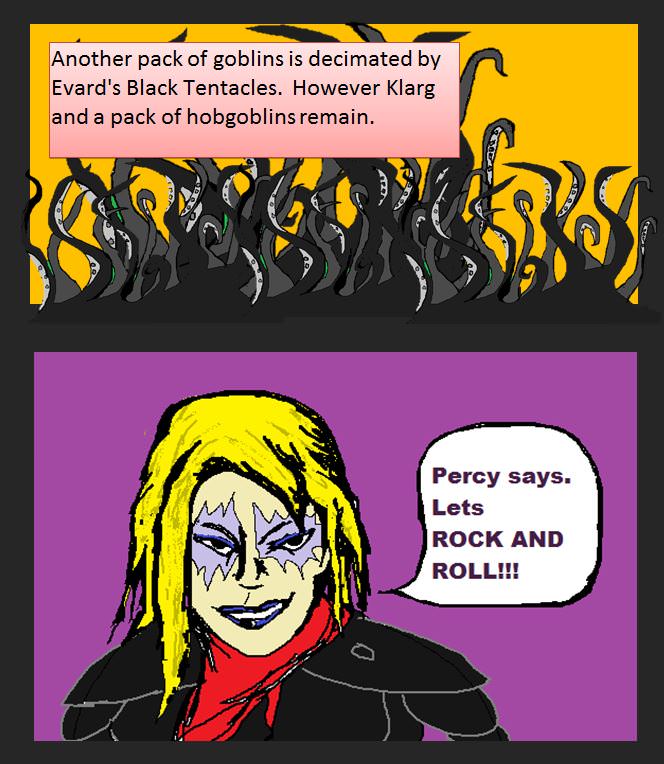 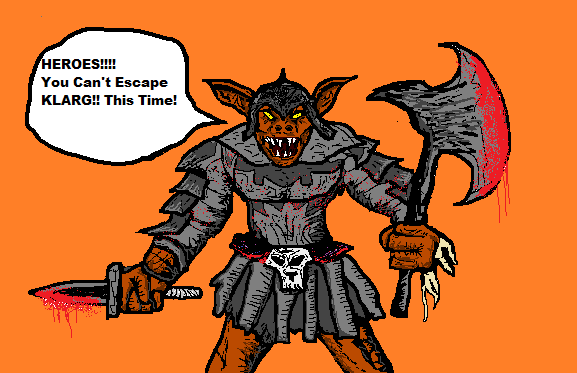 Kalisia uses the bardic spell Dissonant Whispers while Anorak blasts them with a Cone of Cold and Percy cuts deep into the hide of Klarg with his axe.  Kat fires an arrow that drops one of Hobgoblins dead.  They are then met with attacks.  Two hobgoblins attack Percy nearly killing him.  Klarg lands a dreadful blow on Kalisia.  The Companions are close to falling.  The next turn starts however with a Crit Arrow shot by L'lyssa that drops Klarg.

Percy cuts off Klarg's head and waves it in the air.  The remaining goblins, most of which are wounded, see it and flee.  The Companions have crushed the goblin wave and killed Klarg once and for all.

They see that the goblins in the south of town are also retreating.  Either through the stalwart actions of the miners there or from the death of Klarg the battle there seems to also have been won.  Percy can't help but notice that the miners there seem to use a professional martial discipline and look far more formidable than he would have expected.  He does not dwell on this mystery though as the town is still in danger.

They rush to meet Sildar who ushers them into the Stonehill Inn that has become a makeshift headquarters for Sildar and the Mystra Militia.

"Are you ready to finish off these fools?" He asks the group.  "Good because I have a mission for you, one that will cut off the head of this red cloaked beast.  They are led by a wizard they call the Glass Staff and here is how you can get at him".

Look for the next chapter below: 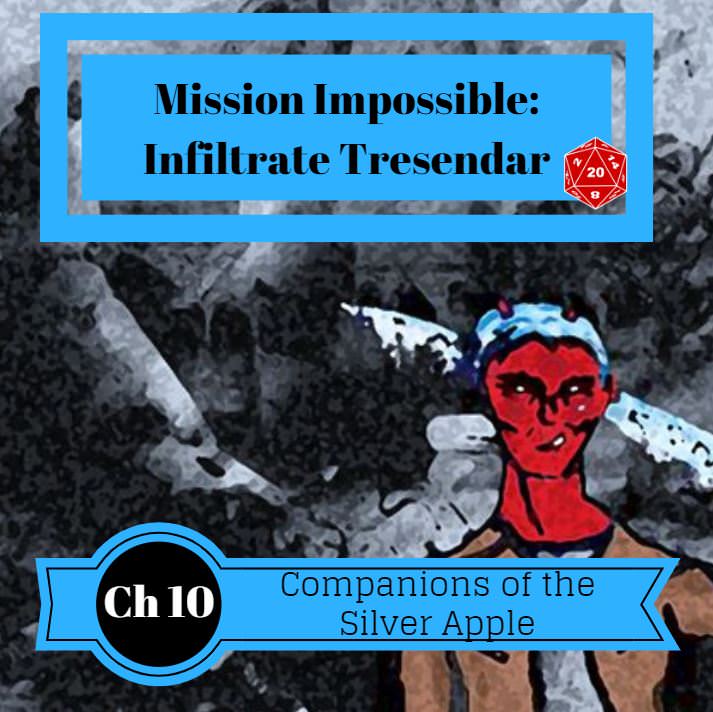 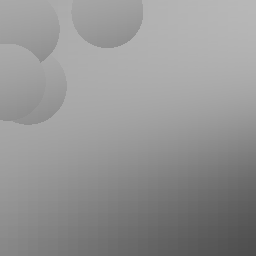 Here is the piece called "Death of Klarg" 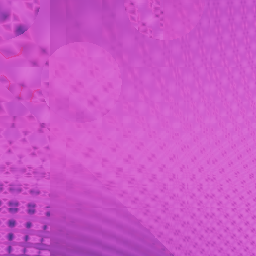