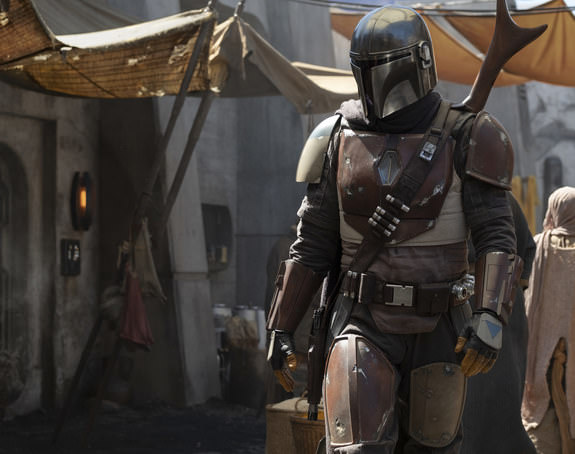 Disney may have decided to slow down the Star Wars films but they are continuing with Jon Favreau's TV series called the Mandalorian.  The Mandalorian seems to be going after something of Western gunfighter on the edge of civilization vibe.  Disney says The Mandalorian will, "follow the travails of a lone gunfighter in the outer reaches of the galaxy far from the authority of the New Republic."  The series is set in a time period between Return of the Jedi and The Force Awakens.

As part of NYCC Disney has released the first image from the series which shows a Mandalorian warrior with a rifle strapped to his back striding down a Star Wars market.  So far the Star Wars fan base has been very positive about the project.

We will release more info on the series, trailers, images, and more as they become available.

Currently, the series seems to have a positive reputation among fans, many of whom were turned off by the deconstructive style of Star Wars: The Last Jedi.

Industrial Light & Magic has created a TV Division officially for the show the Mandalorian.  You can see the press release for this below:


Industrial Light & Magic (ILM) is expanding its offering of best-in-class visual effects and animation services to include the streaming and episodic television market with a new division: ILM TV. The division will be based out of ILM’s new 47,000 square foot London studio and supported by the company’s global locations in San Francisco, Vancouver and Singapore.

The ILM TV team will be lead by Visual Effects Supervisors Hayden Jones and Jonathan Privett alongside Executive Producers, Louise Hussey and Stefan Drury. Previously, the team set up and oversaw DNEG’s television division; winning a BAFTA for Special, Visual and Graphic Effects for their work on BLACK MIRROR.

ILM TV’s first projects will be Lucasfilm’s eagerly anticipated live action series based in the Star Wars universe, THE MANDALORIAN, being developed by Jon Favreau and Superman prequel series KRYPTON, now in its second season, based on DC characters from Warner Horizon Scripted Television for SYFY.

“It’s not often you get to create a new division at Industrial Light & Magic”, explained Rob Bredow, Executive Creative Director and Head of ILM, “We are seeing a real convergence in our creative approach used on films and in our immersive entertainment division ILMxLAB, and now we’re proud to be able to offer these ILM innovations in a way that’s suitable for streaming and television work to creatives around the world.”

ILM’s legacy in television dates back to the studio’s revolutionary and Emmy award-winning work for THE YOUNG INDIANA JONES CHRONICLES, which brought feature film quality effects to an episodic series for the first time. “We are extremely excited to be re-igniting ILM’s involvement in this market and to showcase the team’s expertise, unrivaled technology and production management globally.” adds VFX Supervisor Hayden Jones, “The television and streaming segments have grown exponentially in recent years and we are seeing substantial demand for high calibre visual effects that can be delivered on schedule and within budget, all of which lie at the core of our teams expertise and proven track record.”