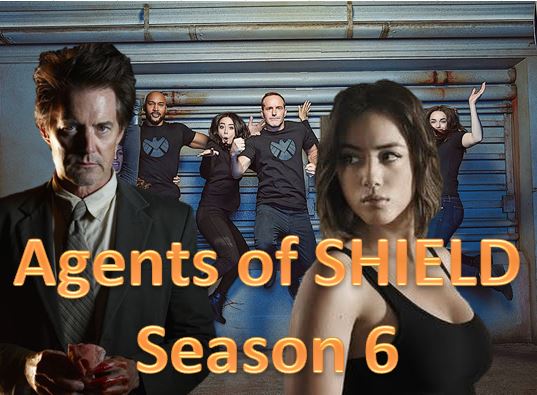 Mac is in charge, Coulson is dead, Fitz is frozen out in space and so Season 6 begins!  Season 6 will be coming out the Summer of 2019.  No official release date has been set yet.

Thoughts and Speculation for Season 6:
Agents of SHIELD had a very crazy, off the world, lost in time Season 5.  Then after they went through all of those machinations Thanos snapped his fingers and half of the populace of Earth poofed into dust.  This puts the show on somewhat of a weird footing for Season 6.  They can not really address the Thanos issue as it is tied into the upcoming events of Avengers 4.  They could do what Captain Marvel is doing and do a season that occures in a different time.  However, it seems that what Marvel is planning to do is to release the next season AFTER Avengers 4.  The events that occure in Avengers Infinity War and Avengers 4 will have occured when we next see our Agents.  This pushes the launch of the next season sometime into the summer of 2019.

There is no official release date yet, however Toylab speculation is that it will be in July 2019.

So, we be coming BACK 💥 THANK YOU to you wonderful fans for going on this crazy fun journey with us. SEASON 6. Say whaaaaaa?!?!?! LOVE YOU ALL #AgentsofSHIELD #Season6 @AgentsofSHIELD ❤️@ABCNetwork ❤️
— Elizabeth Henstridge (@Lil_Henstridge) May 14, 2018


Other ABC Marvel shows.  There have been rumors of both a Ms Marvel show, a Damage Control show, and a show called Most Wanted to focus on Mockingbird and Lance Hunter.  However, all of these shows have failed to get into production.  For now Agents of SHIELD remains the sole Marvel show to have success on ABC.  I do however think that this could change.

Channing Dungey an Executive at ABC mentioned this issue:

“We continue to be very excited with what they’re doing with SHIELD. We’ve tried a few things that haven’t worked out as well as we would’ve liked. We developed a couple things this season that we don’t think are going to end up going forward, so we’re going to look really carefully about what we do next, because the idea for us is to come up with something that works very well for both Marvel and ABC, so we’re going to continue to try there.”

What will Season 6 be about?  They could really do anything with it however after having a heavy SciFi Season 5 I expect them to become more grounded and look back some of their older plot points from Season 1 and 2.  My guess is that we may see Cal, the father of Daisy come back in some fashion.  I don't have any real evidence of this but Kyle MacLachlan who plays Cal did post this tweet.


Four years ago, I made my debut as Cal (aka @chloebennet’s dad) on @agentsofshield. How do you think his vet clinic is going? 🐶 #TAHITI pic.twitter.com/zi37L3TXD8
— Kyle MacLachlan (@Kyle_MacLachlan) September 24, 2018

That is some fun speculation, what do you think is going to happen?

Agents of SHIELD Store
Toylab is a member of the Amazon Affiliate Program so we can highlight awesome super secret SHIELD gadgets like these below: