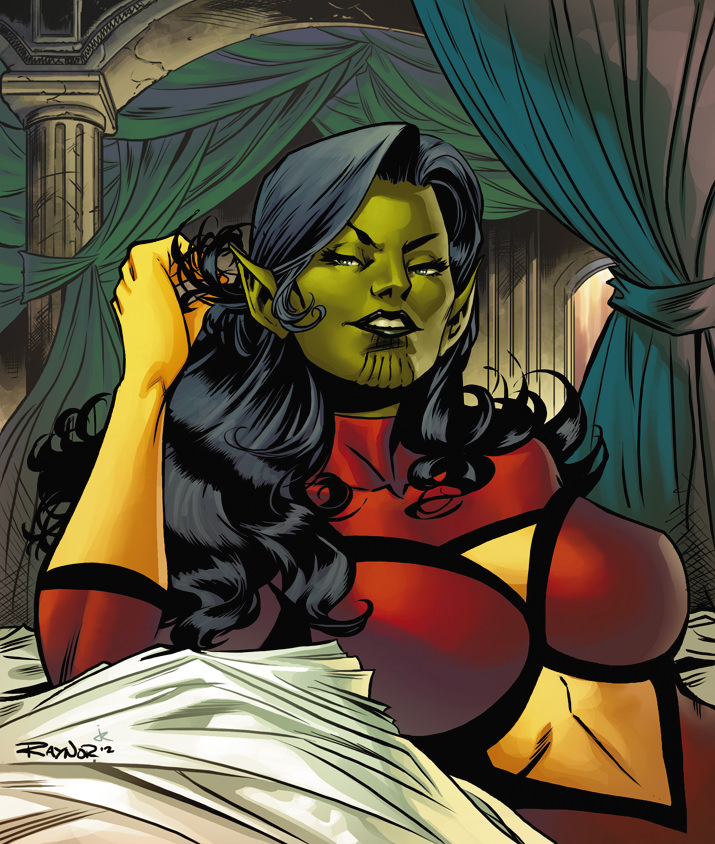 Veranke is the Queen of the Skrulls who comes up with a masterplan to conquer Earth with the Skrull Empire is all but destroyed.  She is a major villain in the Secret Invasion storyline. 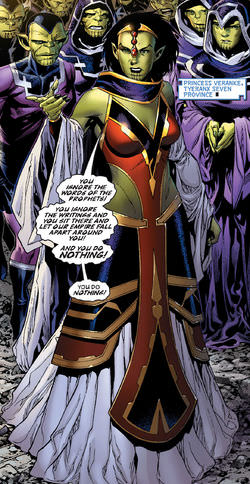 Pre Earth Period
Veranke first appearances coincided during the Secret Invasion event however under the guise of Spider-Woman she was active during many earlier events.

Veranke is born a Skrull princess and obsessed with Skrull prophesy and scriptures concerning the end of Skrull Empire.  This obsession is initially humored by the Skrull power elite however when she uses her knowledge to become critical of Emperor things change.   She branded a religious fanatic by then Emperor Dorrek VII and sent to live in exile on a prison planet.  A group of Earth heroes called the Illuminati had managed to infilterate and escape from the Skrull palace.  Vernake had pointed at the Skrull prophesy that stated that an attack upon the palace would lead to the destruction of the homeworld, and a wave of devastation in Skrull space, and they would then need to take a world of blue as their new home.  This criticism was dismissed by Dorrek.  The only reason she was not executed was that Dorrek saw that it would make her into a martyr.

After years of imprisonment a contingent of her followers retrieve her from her planetary prison.  They inform her that the Skrull Homeworld has been destroyed by Galactus and that she was right.  She is then made into the new Skrull Queen.  Her first order of business is the preparation of the conquest of Earth which she sees as the blue planet foretold in the Skrull scriptures. 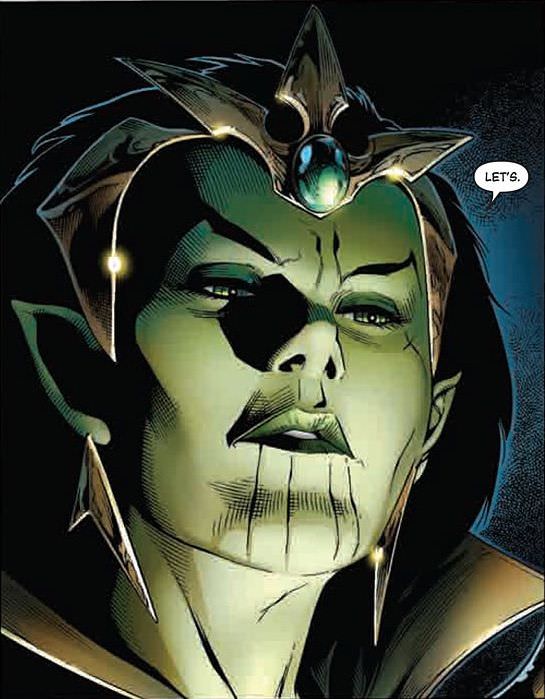 A massive new operation that maxes out all of the Skrull Empire's resources is undertaken to prepare for the invasion of Earth.  Veranke offers herself to the cause by becoming one of the primary agents.  She assumes the role of Spider-Woman because she is a double agent of S.H.I.E.L.D. and Hydra as well as a member of various Super Hero teams.  She is switched into Jessica Drew's role while the latter was attempting to infiltrate Hydra as a double agent of Nick Fury director of S.H.I.E.L.D.

She was involved in the Raft prison break out that saw many super villains released. This event unintentionally caused the creation of the New Avengers. She joined the Avengers as an agent still secretly reporting back to Nick Fury. During one of her adventures she learns of Hulkling a son of Kree Hero Captain Marvel and of Skrull Princess Anelle and an heir to the Skrull Throne. She orders her Skrull agents to execute him quietly to keep his identity a secret from the rest of the Skrulls.

House of M
Veranke attempted to kill Scarlet Witch but was unsuccessful.  She did not want the world altered in the manner that the Scarlet Witch had changed things.  She also learns during this event that the Annihilation Wave had hit the Skrull Empire and that it was now nearly fully destroyed with billions of Skrull lives lost.  This steeled her determination to conquer Earth and fullfill the prophesy.

Civil War
During Civil War, Nick Fury is removed from Director of S.H.I.E.L.D. and Maria Hill assumes command.  Mariah Hill sees the status of Spider-Woman as a potential risk and orders that she be apprehended.  She is then freed from the Hellicarrier by a Hydra special operations squad.  She then seeks out Captain America and his Secret Avengers to join up with that team.  During this turn of events she effectively loses her connection to SHIELD and to Fury.

The Skrull infilitration of the world is revealed to the New Avengers when in a battle with the Hand the Avenger Echo kills Elektra.  Elektra's body reverts to its natural form of a Skrull.  Veranke as Spider-Woman battles Wolverine and takes the corpse to Iron Man.  She then joins with the government sanctioned Mighty Avengers.  The moves of Spider-Woman she claims are to help battle the Skrulls by bringing together the government sanctioned heroes of Civil War but really it is just designed to sow distrust. 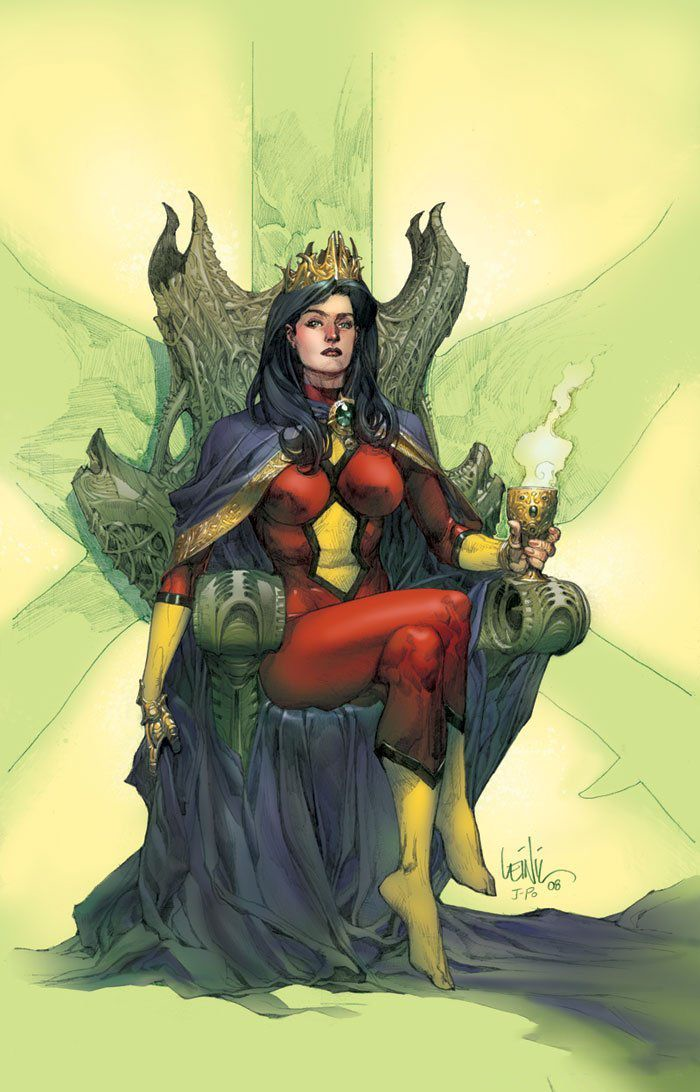 A Skrull transport crash lands in the Savage Land and Spider-Woman ensures that both the New Avengers and Mighty Avengers are there to meet it.  She has a meeting with the other Skrull agents on their final preparations to conquer Earth.  Veranke brutally attacks Echo repeatedly blasting her with Venom blasts while the heroes are in the Savage Land.  She then confronts Stark telling him she believes he is a sleeper agent, before she can subdue him, Black Widow appears.  Black Widow attempts to kill her but is stopped by Skrull version of Beast and Jean Grey.

All the heroes begin to eventually overcome the mechanations of the Skrulls. Various teams form including Thor, The New Avengers, The Mighty Avengers, the Young Avengers, The Initiative, The Hoods Gang, Captain America (Bucky version) and the Thunderbolts into a single united front against the Skrulls. A massive battle begins between the Super Skrulls and all of the assembled heroes. During the battle Wolverine comes close to Veranke. It is clear that Wolverine intends to kill her and end the Invasion. He impales her threw her shoulder with his claws. Clint Barton as Ronin fires an arrow into her head next seemingly killing her. The Hank Pym Skrull unleashes a terrible trap turning on a world ending device inside the Wasp. Wasp is transported out of the world by Thor. Veranke is revealed to somehow still be alive but before she can regain her composure she is shot and killed by Norman Osborn.

Norman Osborn is considered a hero for killing Veranke and uses this political power to take control of various entities in Marvel in what is known as Dark Reign.
Powers:

As a Deviant Skrull Veranke has the ability to alter her shape to match that of almost anything, humanoid or animal or an even inorganic object.

MCU:
Veranke has not yet appeared in the MCU or the Fox X-Men film universe.  However, she could possibly appear in both.  The film Captain Marvel is set to explore the Kree Skrull War in which she could be possibly included.  Also Fox is rumored to be looking at adding Skrull characters to the X-Men:  Dark Phonix film.