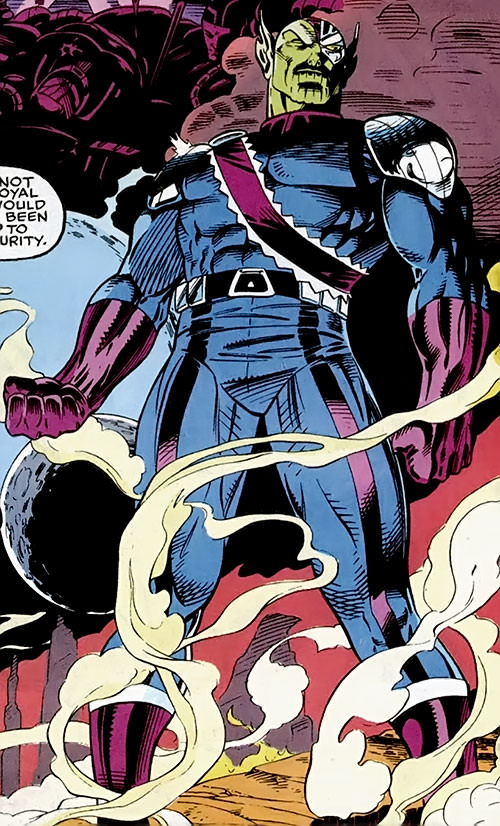 Talos is a Skrull warrior and general who led Skrull forces during the Kree Skrull war.  He is unique among the Skrulls in that he lacks the ability to shape change.  He has battled the Hulk, Nova, Kree, and the Hulk. 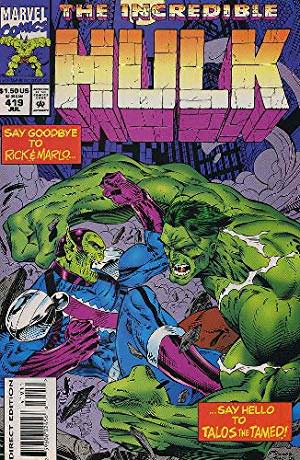 Skrull Toys
With the new Captain Marvel coming out now is the best time ever to buy Skrull toys and merchandise.

Introduction and Battle with Hulk:
Talos is a Skrull noble and warrior who seeks out the Hulk on Earth to die in battle.  Talos was shamed during the Kree Skrull War in which he could not bring himself to take his own life.  As a warrior he feels so strongly that he should die in battle that suicide was never an option for him.  One he was returned home after the war he was so shamed that he was all but banished by the Skrull Empress.
Talos is born of a noble line but has a unique genetic condition in which he can not shapechange like normal Skrulls.  The only reason he claims he was killed at birth was due to his noble lineage.  While initially looked down upon by his fellow Skrulls Talos began to distinguish himself through his strength and battle prowness.  He became one of the greatest warriors and tacticians in the Skrull Empire.  He was given the name of Talos the Untamed.  However, during the Kree Skrull war he was captured and this is where his shame began.  After being captured he took on the shameful moniker of Talos the Tamed. 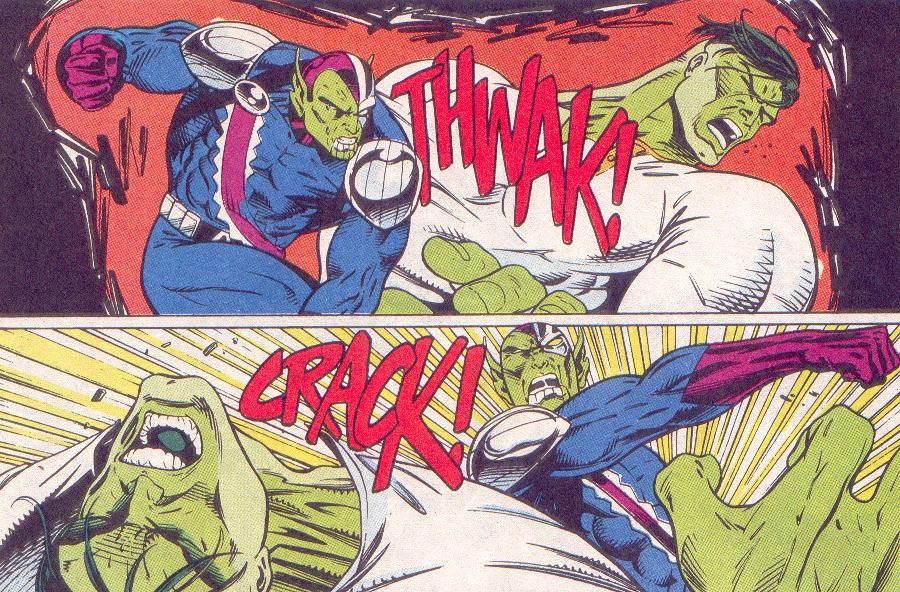 Talos battled Hulk in the hopes that Earth's great monster would give him a fitting dead.  However, Hulk at this point had the full thinking of mind of Bruce Banner.  This Hulk is sometimes referred to as Professor Hulk.  Upon learning what Talos wanted and why, Banner outsmarted him rather than kill him.  He got down on his knees and begged for Talos to stop hurting him.  The shameful display stopped Talos cold who deemed the actions of Hulk to be dishonorable.  He returned to the Skrull ship where the Skrull warriors watching the battle cheered.  It seemed possible that Hulk's charade was enough to restore the honor of Talos.

Secret Invasion:
Talos was deemed to be of no value in Secret Invasion due to lacking an ability to shape change.  He was mentioned by Chancellor Kai'du who hoped that Talos would eventually be able to join them on Earth.

Annilation:
Talos battled the Annihilation wave along with other cosmic characters.  It appears that his battle with the Hulk allowed him to regain his honor.
Glorian lured various powered cosmic heroes to the planet Godthab Omega. Talos traveled to a town called Abyss on the planet Godthab Omega.  There he battled Devos the Devastator.  Devos managed to defeat Talos but himself was struck down by Gamora.  Both Talos and Devos then ended up imprisoned along with Glorian.  Eventually, as the Annihilation Wave approached both Devos and Talos were ordered off the world by Ronan the Accuser.  Talos complied despite his hatred of the Kree.  He then joined with Nova and the United Front to battle the Annihilation Wave. 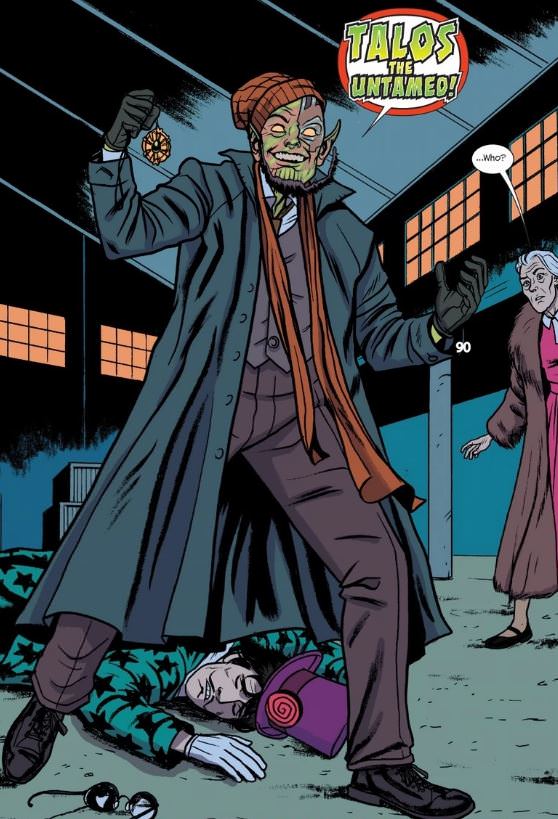 Talos disguised himself as a human named Jonathan Richards with make up and costuming to steal magic items in a bid to conquer the world.  He was stopped in his attempt by Howard the Duck.  Talos and Howard the Duck went back and forth stealing a necklace from each other.  Eventually Talos revealed his true nature as a Skrull.  Talos had been after the necklace because it contained one of the Abundant Gems that had some powers.  Talos felt that if he could get his hands on the gem that he could conquer Earth and regain his honor.  Using the gems Talos created a group of Abundant Warriors who began to conquer Earth for Talos.  However, Howard the Duck and his ally Tara Tam tricked Talos by pretending to be Emperor Kl'rt.  While Tara Tam pretended to be Kl'rt, Howard stole the gems back and ended the threat from Talos.  He was apprehended by the Fantastic Four.


Power:
Talos is a unique Deviant Skrull in that he has no ability to shape change but he does have other abilities.

The Incredible Hulk #419 First Appearance of Talos the Tamed 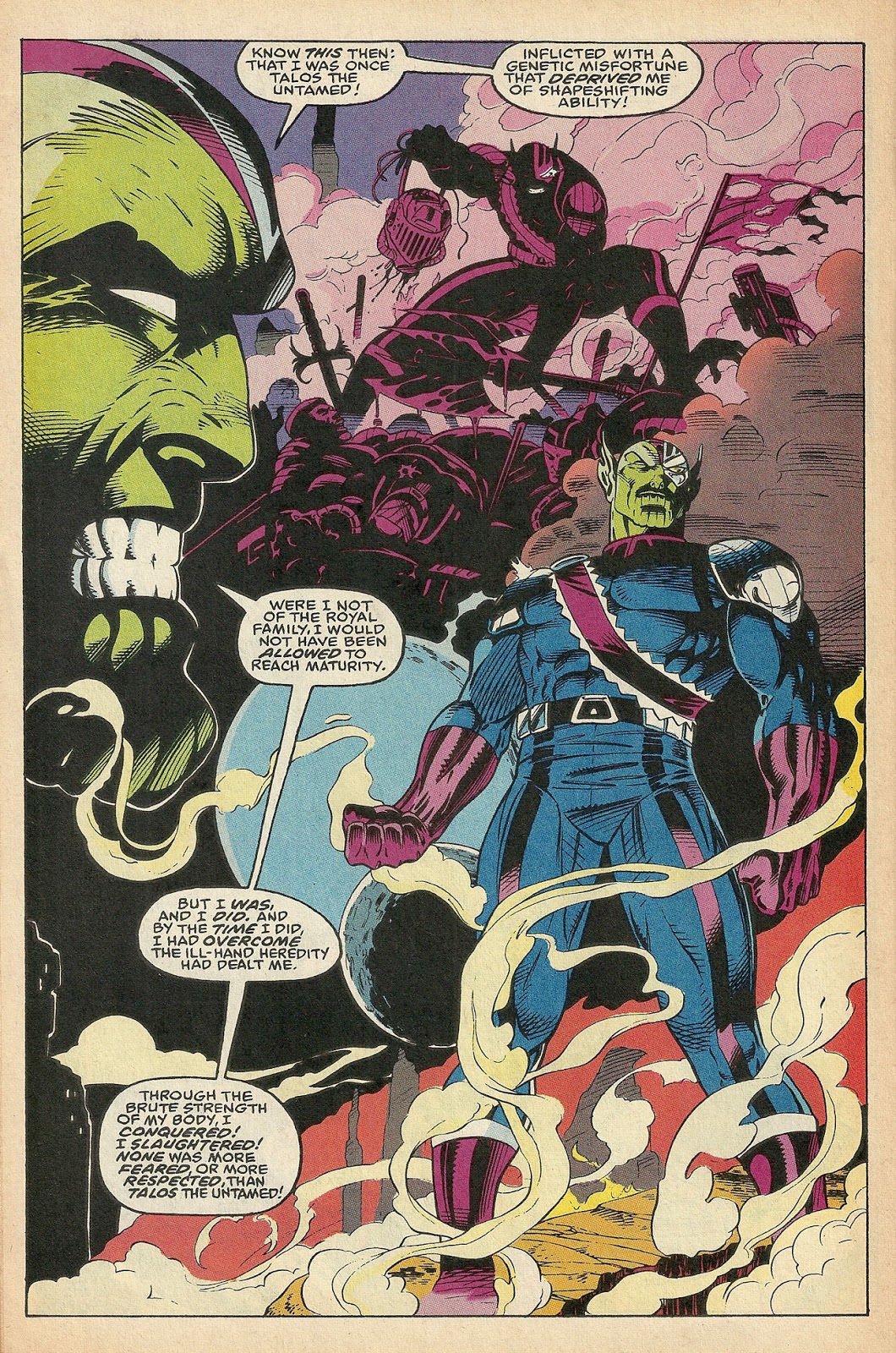