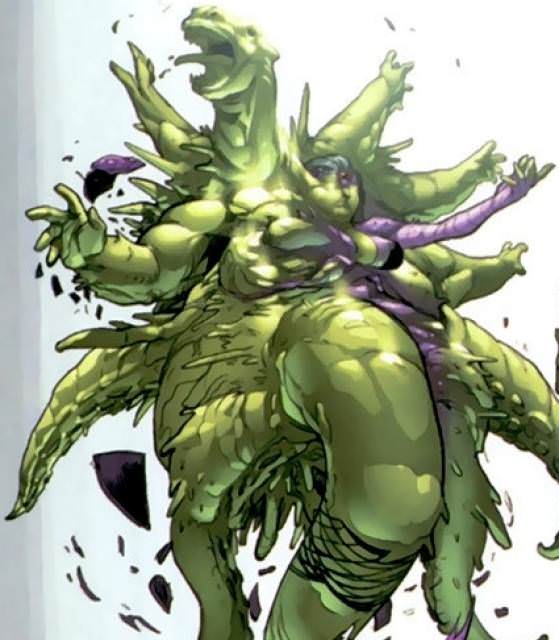 Sl'gur't is the primary goddess of the Skrulls.  In myth she represents their ability to shape change and adapt and is thus in a constant state of flux.  Sl'gur't is also represents war while her husband represents peace.

Alias: Great One, God of  the Infinite Names

Millions of years there was the planet of Skrullos was home to a primitive humanoid Skrull.  These primitive Skrulls were experimented on by a highly advanced alien race called the Celestials.  The Celestials left Skrullos with three distinct evolved versions of the Skrull.  There were the Deviant shape shifting Skrulls, there were near immortal Eternals, and a third race that had no powers but could acquire mutations similar to humans.  The Deviant's believed themselves superior to the others and embedded themselves throughout the other races as servants and family members.  Eventually, the Deviants rose up in a brutal culling in which the entirety of the other two branches of Skrulls were killed off. 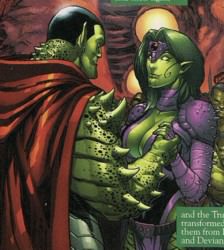 The very last of Eternal Skrulls was Kly'bn.  When the leader of the Deviant Skrulls, Queen Sl'gur't approached him to kill him he gave her a warning.  He told her he was the last constant Skrull and was thus the embodiment of what it meant to be a Skrull.  It was his destiny to be the constant Skrull so that Skrull could know their true selves and spread that truth throughout other worlds.  He warned her that to kill him, would be kill themselves.  Sl'gur't embraced Kly'bn and the two married.  According to the holy test of the Skrulls the Book of World's when the two married their truth transformed them into gods and they ascended into a heavenly dimension.  For millions of years thereafter the couple were worshiped by Skrulls as the leaders of their pantheon.

The two continue to grow in power as the Skrulls conquer additional worlds. 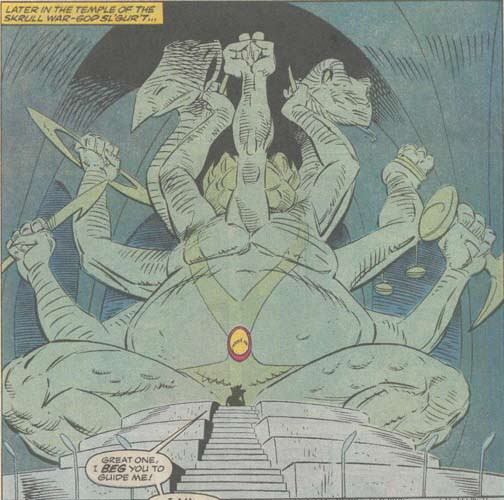 The Book of Worlds was said to have been written by the couple after they had been transformed into gods.  The book foretells of the end of their Home World, the end of the Skrull Empire and the eventual conquest of a new home on a blue planet (Most consider this to be Earth).  Due to the passages of this book the conquest of Earth is a holy war to the Skrulls and they consider it rightfully theirs.  When a zealot Skrull Queen Veranke attacks Earth to conquer it she nearly succeeds.

A group of deities on Earth see that the conquest of Earth by the Skrull will effectively kill them.  The Skrull if successful will replace the Earth pantheon with their own.  Athena of the Olympians puts together a God Squad of Earth deities to hunt down Kly'bn  and Sl'gur't and kill them.  The hope is this act will sap the Skrulls of their faith and allow them to be defeated.

Klyn'bn slays Ajax and seeming kills Snowbird.  He then gets in a brutal battle with Hercules.  Hercules holds his own and eventually Snowbird returns with the the back bone of Demogorge and impales Kly'bn with it.  The bone of the elder god is powerful and capable of killing even a god.  His death causes the temple that the gods reside in to collapse.

Hercules and Snowbird escape the temple. It is then revealed that Mikaboshi is still alive.  He had actually killed Sl'gur't when Sl'gur't was in his form.  He then took over the role of Sl'gur't in the Skrull pantheon.  The mission of the God Squad ends in success with the death of the primary Skrull gods. 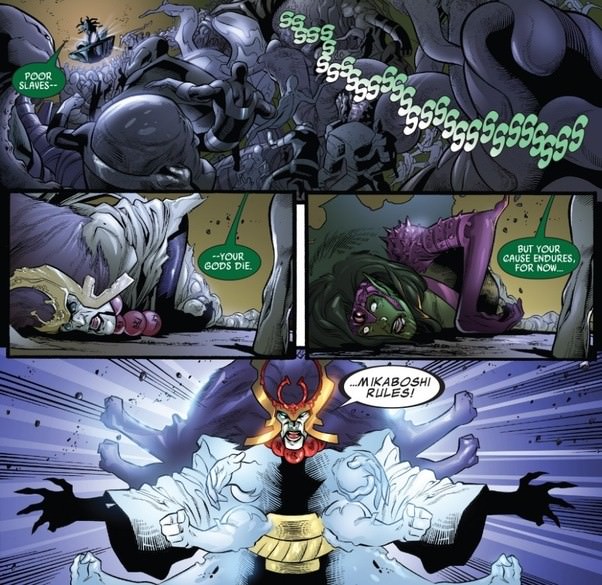 Powers:
Sl'gur't is the protypical ideal Deviant Skrull and as such is a master shape changer to the point where she is in constant flux.  Her polar opposite is the static Kly'bn.

As a goddess Sl'gur't possess deep insights and knowledge of the Book of Worlds.  She can be deeply inspirational to Skrulls.

MCU:
Sl'gur't has not been depicted in the MCU.