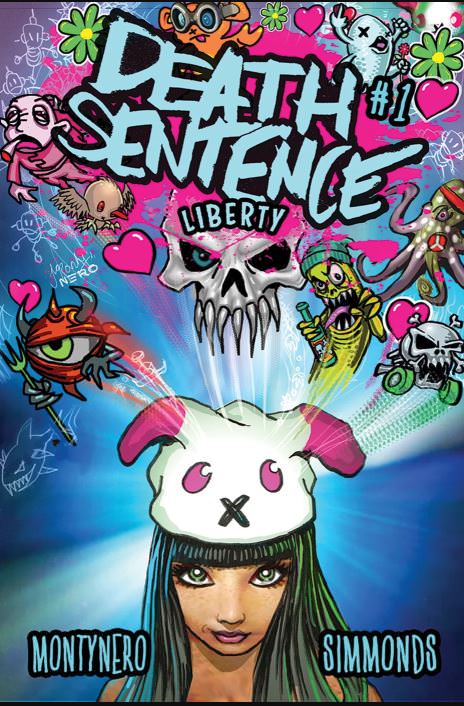 Monty Nero and Martin Simmonds create a creative comic about rebellion and creativity.

Death Sentence Liberty tells of three characters afflicted by an STD that kills them in six months but gives them superpowers.

Verity’s the beating heart of the story. Frustrated and unfulfilled she longs for something more than cheap thrills and empty sex – to be a great artist and achieve something timeless. With no fuck's left to give she's a dangerous maverick rallying against an increasingly aggressive government.

Weasel is a rockstar drug-addict desperate to reconcile with his family and record a legendary album before he dies. His G-plus powers are as unreliable as he is, spreading chaos or comedy - which is why Verity dumped him.

Roots is half-woman, half-plant, and 100% badass - an ex drug dealer using her burgeoning G-plus powers to protect her hood from police and gang violence.

Additionally, Jeb is an FBI agent infiltrating the UK's top-secret G-plus research facility to steal their secrets - a family man in far worse trouble than he realises.

“Death Sentence was originally independently made by me and Mike Dowling, which is why it’s so crazy and different. It’s important to keep that vibe, so we can keep pushing the genre in new directions. Kickstarter suits us perfectly. ”
What kind of directions? 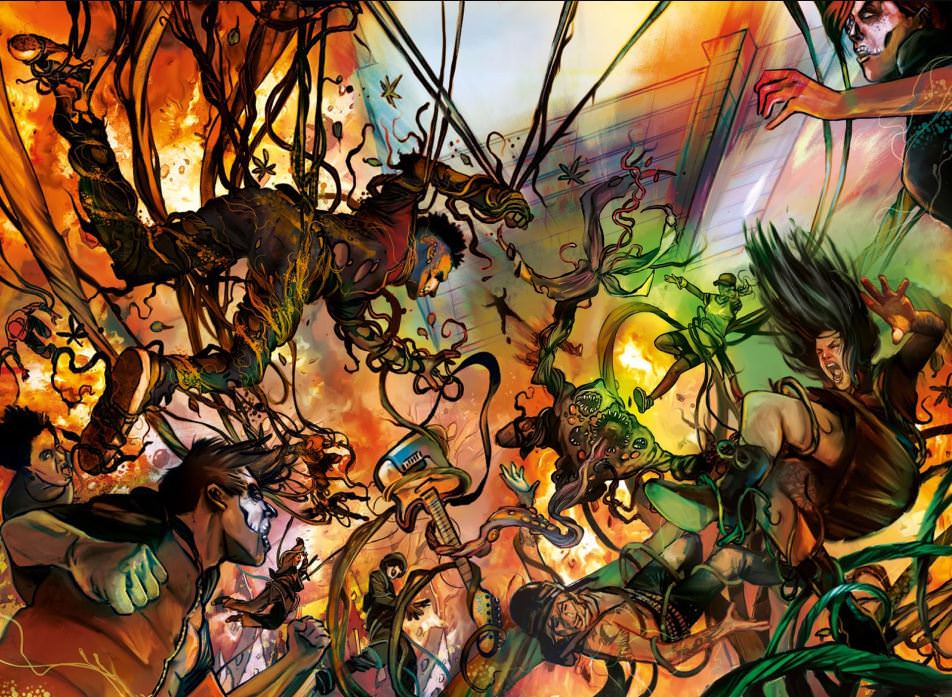 “Well, mad directions. Verity’s got these incredible art powers, and you’ll see those develop in more innovative ways over the next six issues. The cover gives you a clue. The art-style. the storytelling, the characters, the themes - they all evolve. If you just love comics, and how they work, there’s loads to enjoy.

I’d call it superpowered fiction, not a superhero comic. Because these characters aren’t heroes in that clichéd way you see throughout history. There are no costumes. No band of brothers doing good. They’re acting in deeper, realer ways. They’re figuring out who they are, and what life’s about, before they die. They’re facing up to the problems we all face, their glorious imperfection and what it means to get it wrong and fight on. They need to solve the mystery of their own existence, of the G-plus virus. And what they discover is ultimately more profound, more thrilling, than punching costumed supervillains in the face.

There are LOTS of explosions in issue 01. Do you enjoy writing action?

“Hell, yeah. But I realised early that action doesn’t hit home unless you’re emotionally invested. The action needs to affect emotions and change the stakes. Then you can have enormous fun with action, lavish time on it, because it’s revealing character and moving things forward.

I mean, I love James Bond, Die Hard, Mission Impossible type stuff. But I don’t write it unless I find a way to make it fresh, and move you emotionally. There’s this incredibly tense infiltrate-and-escape sequence in issue two and three, with a great twist at the end. And that’s there because I just wanted to write that kind of thing, and explore how it all works in comics. I love it, Martin loves it. We do that a lot. Weasel’s moped chase is there because we wanted to do a fresh car chase; Verity’s escape from the kitchen is our fresh take on close-quarter fighting. There’s an explosive action scene through the whole of issue one which is the last word in epic military vs superpowers battles. The city’s in ruins at the end, so things start get more personal after that.

What about the Kickstarter itself, what’s on offer?

Well, the comic is the thing – it’s all finished and you can see the test printing on the site. Each issue is 24-pages of lustrous full colour artwork by Martin Simmonds, who’s a regular Marvel cover artist (Jessica Jones, Quicksilver). He’s a brilliant storyteller, and he’s painted three issues of Liberty so far. So the first comic is ready to be delivered as soon as the Kickstarter ends.

What extras you order depends on your budget. You can get prints, or huge posters, double sided bookmarks, original artwork, cover art commissions. We’ve also teamed up with Ani-mia, who’s a huge Death Sentence fan, to offer a special Cosplay photoset. Then Martin’s done an amazing gatefold cover variant, which you can also get as a print. At the highest end you can hang out with me for two days and talk comics, and see some exclusive new work. It’s all good.”