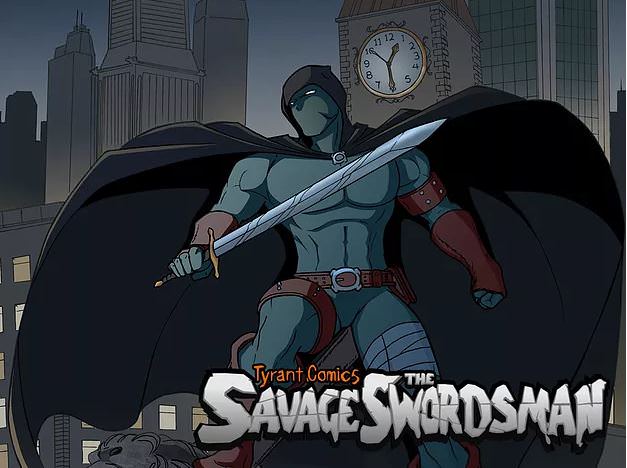 You can now purchase the Savage Swordsman in digital and print form from Amazon Prime and Comixology. This comic looks bad ass.

You can purchase the first issue through the link below using the Toylab's Amazon Affiliate Link. Check out the press release below from Tyrant Comics to learn more about the Savage Swordsman.

The Savage Swordsman Is Ready To Save The World

Oklahoma City, OK, March 1st, 2016 – Chris Ryahn and Tyrant Comics have launched The new Savage Swordsman comic book, the first edition of five part series. The comic book revolves around the adventures of Rukata the Immortal Savage Swordsman and his adventures against villainy in the 1600's.

A surprising original comic book in the nomenclature. The comic is full of Action and Adventure but there is also a humor attached to it in the writing. The artwork is elegantly designed by Edwin Domingo in Black & White combination, and the book consists of 20 pages.

“It is the goal of every writer to rise up in his community, and make something that everyone can enjoy.”_ Chris Ryahn, Creator of The Savage Swordsman.

“At first glance, our hero is a more pure, archetypal character. His mantel has existed for millions of years and in that time, he has remained a beacon of justice using little more than swordplay. At second glance, this is not one of those stories.”

"This might just become a new hit. I was truly entertained, so it definitely fulfilled my expectations. Savage Swordsman is a nicely done comic book that will give you more than a few chuckles. Join the Swordsman on his journey to becoming a legend - in his own unique way of course. If I had to give Savage Swordsman a rating, I would give it 5 out of 5 stars”

“Savage Swordsman is one of those great comics, just grabs your attention from the very first second and doesn’t even allow you to blink your eyes. Irresistible humor and great artwork”

Here is what the popular Youtube channel TV Yojimbo has to say about the The Savage Swordman https://twitter.com/TVYOJIMBO/status/693819837412478976

The Savage Swordsman is available both in print and digitally from Amazon. With Amazon Prime and Comixology.