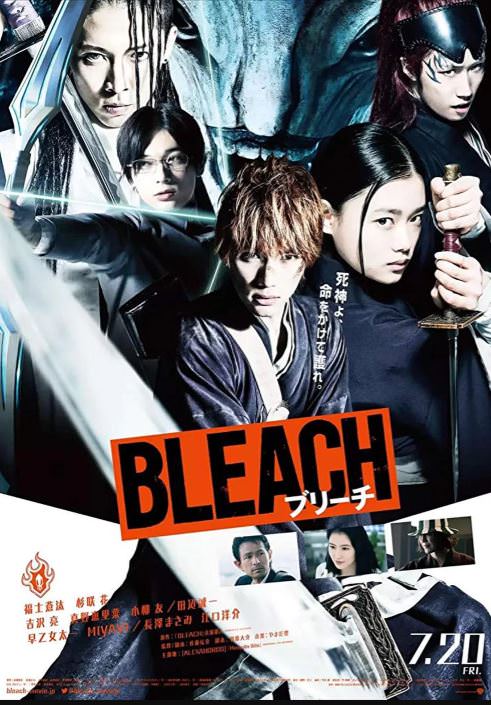 The popular Anime Bleach had a live action film made that was released in Tokyo earlier in the year.  Netflix has announced that the film will now be released on its platform.  Bleach follows the struggles of a high schooler named Ichigo who gains the power to see spirits and eventually to reap souls.  This power allows him to force lost souls wandering the world into the afterlife.  He does not really want this ability but finds the only way to remove the power is to first use it to reap souls.  He soon begins to encounter dark monstrous spirits known as hollows that he must use his power to defend the living world from.  The manga has been collected into 74 volumes and has sold over 900 million copies in Japan.  There are four animated feature films of Bleach that you can find streaming on Hulu.

The film was first shown in the US earlier this summer when it premiered at Japan Cuts 2018 in New York City.  The double screening of the film quickly sold out and even Director Shinsuke Sata appeared.  The film has generally been with positive praise from Bleach fans.  Some have noted that the film's budget has forced the film to skimp out on certain fight scenes.

Bleach will appear on Netflix on Sep 14, 2018.  Netflix also has become home to the live action versions of other Anime Live Action titles such as Full Metal Alchemist and Death Note.  Death Note was actually produced as a Netflix original series.

"When high schooler Ichigo is suddenly given reaper abilities, he really wants to give the powers back. But he'll have to reap some souls first."
Trailer: