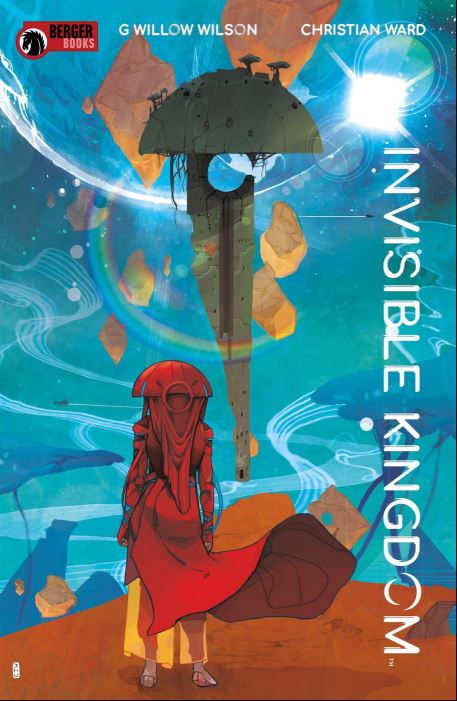 Not much out about this yet but it does look cool.  A new project from Willow Wilson and artists Christian Ward.  Willow Wilson has achieved rockstar writing status after her subperb work on Ms Marvel and A-Force.
We also found this interview with Willow discussing her new project the Invisible Kingdom:  Where she was interviewed at San Diego Comic Con.

“It’s a delight to be working with my mentor Karen Berger once again, especially on such an exciting project,” said G. Willow Wilson about her inclusion in the Berger Books imprint. “Christian Ward’s art is truly visionary—this is one of the most dynamic collaborations I’ve ever been involved with. I can’t wait to show the world what we’ve cooked up.”

Set in a small solar system in a far-flung galaxy, Invisible Kingdom tells the tale of two women—one a young religious acolyte, and the other, a hard-bitten freighter pilot, who separately uncover an unholy conspiracy between the leader of the Renunciation, the system’s dominant religion, and Lux, the all-consuming mega-corporation that controls society. On the run from dangerous reprisals on both sides, this unlikely pair of rebels risks plunging the world into total anarchy if they reveal the truth. But when your beliefs betray you, what choice is left?

“I’m thrilled not only to be returning to a big creator-owned sci-fi world, but to be working with Karen Berger and G. Willow Wilson,” said Christian Ward. “Karen's amazing career has helped to shape me as a creator, and with Willow, I don't think there’s anyone today who writes with more warmth, humor, or humanity. Nobody writes better, more relatable characters than her! We’re already buzzing with excitement about all the weird and wonderful places that we’re taking this whole new assemble of instantly lovable characters. I hope you join us as we go somewhere amazing.”

“I’m so excited to be working with the incredible Willow Wilson again on her first creator-owned series since Air,” said editor Karen Berger. “Together with Christian Ward, one of the most imaginative and uniquely visual artists working today, they’ve crafted a fantastic new series.”