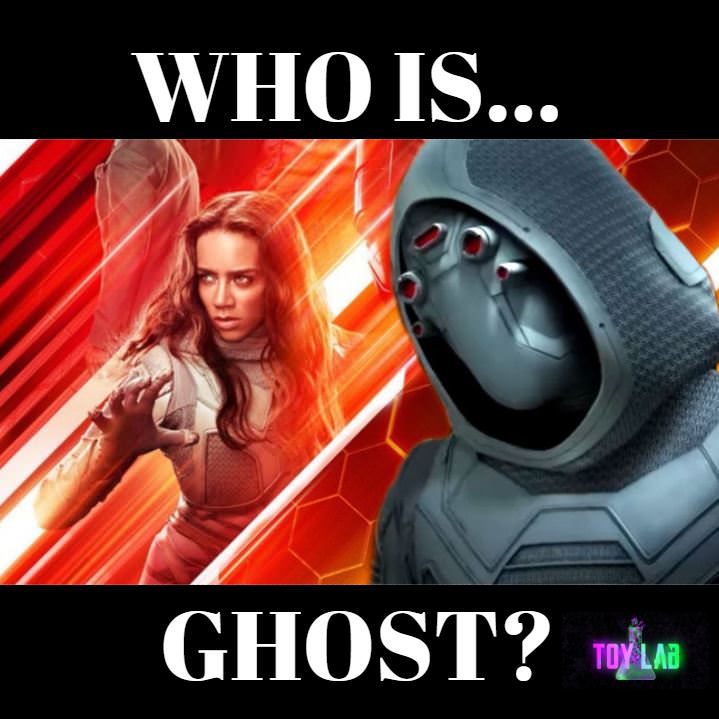 Who is the Ghost?

Ghost is a villain that has plagued Spider-Man over the years.  Ghost will appear as the main villain in the film Ant-Man and the Wasp and is played by actress Hannah John-Kamen.  Ghost was initially an enigmatic and mysterious villain of Iron Man but has since gone on to serve as an anti-hero role as a member of  the Thunderbolts team during Dark Reign and Heroic Age.  He has battled Iron Man, Spider-Man, Black Panther and at times the Avengers.

Media:
I found this clip from the Iron Man cartoon showing a battle between Iron Man and Ghost.  I really like the graphics of this show.  I need to watch more of it.


Ghost Store:
Toylab is a member of the Amazon Affiliate Program allowing us to give you great deals. 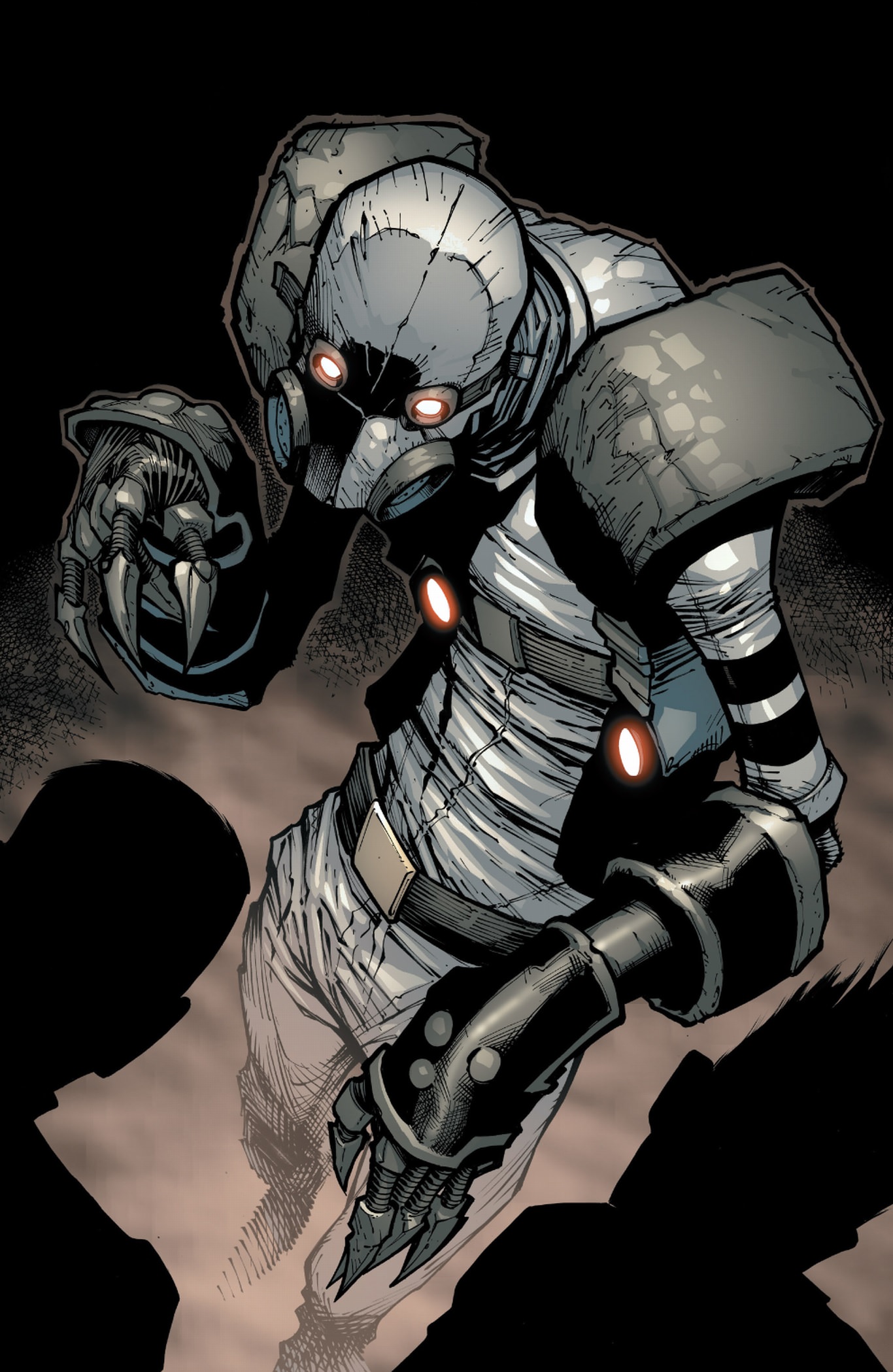 Ghost in the comics was a male character but in the Ant-Man and the Wasp film Ghost is a female.

Ghost begins his career as a very mysterious villain. The origin of Ghost has never been told completely. It was told in the Thunderbolts much later after he first appeared and there were elements that he may have held back and hid such as his name. He uses the name John Morley similar to the name of the first ghost in the Christmas Carole.

Ghost tells his Thunderbolt teammate Moonstone his version of his origin. He claims to have been an ex programmer and engineer for a company called Omnisapient. He becomes something of a right hand man for the board of the directors and is sent to work on a program called Ghost Tech. Ghost Tech is a processor that can physically change itself to become intangible. The company's stock began to rise in expectation for uses of the Ghost Tech. However, Ghost himself begins to get burned out and plans to go on vacation.

The board of director disapproves of this vacation as they want Ghost Tech finished as possible. Before he goes on vacation a beautiful coworker shows up and the two begin to a romantic relationship. His vacation is then canceled and he continues work. He is horrified when his co worker lover is killed by an explosion in her apparent. To deal with his grief he plugs himself into the processor of the company to help enhance his mind and ability to deal with information. However, in this state he begins to connect various facts together and learns that the company he works for hired his former lover to seduce him and keep him compliant. They killed her after she attempted to blackmail them. While he is in this state he also realizes that by pulling information he has tripped an alarm and now the Board has ordered him to be taken out. A bomb goes off in apartment killing dozens of his neighbors. Ghost though is not killed but fused together with his Ghost technology. His mind and body are altered and he uses his new powers to get revenge. He quickly takes down the Board's hitman, the Board themselves and then erases all data about his existence.

He becomes a contract hitman and saboteur attacking companies that he feels are evil like Omnisapient. He often works for one company against another but in truth is against all of them and plans to eventually turn on his own customers.

The Roxxon Oil Corporation wanted a beta particle generator from a company called Accutech Research and Development. The Accutech company refused to sell it to Roxxon so the evil company hired Ghost to take down Accutech. Ghost began causing a variety of problems at the company that led to financial difficulties. Eventually, Tony Stark bought the company and he began researching the company's problems. This led to a direct conflict with Ghost and Iron Man. Iron Man managed to drive away Ghost but before leaving Ghost promised to get revenge on Iron Man and his employer Tony Stark.

Frightened by Ghost, Tony Stark at this time began sleeping in his armor.

Roxxon too was frightened that their agent had gone rogue. They hired Spymaster to take out Ghost however, Ghost managed to make Spymaster reappear in a wall seemingly killing him.

Iron Man and the Ghost end up battling around the Beta Particle Generator. While the generator is on it is releasing a toxic amount of radiation that could prove lethal, however it also allowed Iron Man to see Ghost. Ghost was unfazed by the possibility of death and set out to destroy the particle generator. This resulted in an explosion. Iron Man was only able to find burned remains of the Ghosts costume. With no body to be found Tony assumed Ghost was still alive but could not prove it.


In the story the Unholy Ghost, Justin Hammer and his goons run afoul of the Ghost and temporarily strike a deal with Iron Man to team up.  The super villains who work for Hammer that includes Backlash, Blizzard and Boomerang all go to help Iron Man.  They eventually betray Iron Man but Iron Man does managed to defeat Ghost. However, he is unable to capture the villain. The Ghost then attacks Justin Hammer but Hammer has developed enough defensive capabilities against the Ghost Tech that he manages to escape.

Ghost appears to battle Spider-Man and the Black Panther when he is hired by the Kingpin to steal synthentic Vibranium from Roxxon Corp.  He also battles with Sunturion and Ultron.

In the Dark Reign Marvel storyline Ghost becomes one of the right hand men of Norman Osborn. He becomes one of the members of the Thunderbolts that is also headed by Osborn. It is unclear what would cause the anti-corporation Ghost to begin working for one of the worst Corporate heads in Norman Osborn. Eventually, he explains this to Black Widow that he sees Norman Osborn as a potential virus that if he is successful will pull down the entire corporate system. He eventually betrayed Osborn and revealed his plan to the heroes that he wanted to steal Odin's weapon Gungnir.  It is hinted at that Ghost is becoming increasingly mentally unhinged.  His hygiene is commented on by Ms Marvel saying he smells bad.

Osborn continues to hire and use Ghost as one of his agents unaware that Ghost is plotting against him.  Eventually, he is instrumental in Norman's downfall.  He is then recruited back into the Thunderbolts after the conclusion of the Siege storyline.  While working for the Thunderbolts he had one more major confrontation with Iron Man.  In this battle Iron Man gives up and lets Ghost into his suit and reveals that he has sold massive parts of Stark and that the remaining company is effectively a small business.  After this Stark is no longer a target of Ghost.  He later matter of factly reveals his origin (Possibly) to Moonstone.  He tells Moonstone he is unsure why he is telling her this that it could be due to him regaining his capacity to trust or because he sees her as a non threat.  Either he way says that they are irrelevant to a man who has abandoned his humanity and is untouchable.
Ghost is hired by Tiberius Stone and Mark Raxton to sabotage Parker Industries. Though he is thwarted by Spider-Man and Parker Industry Employees he does succeed in destroying the Parker Industry building and everything in it with explosives.
Ghost Power:

The Ghosts powers come from the Ghost Tech Suit and have usually been kept some what mysterious but include:

Ghost also has variety other skills including being: 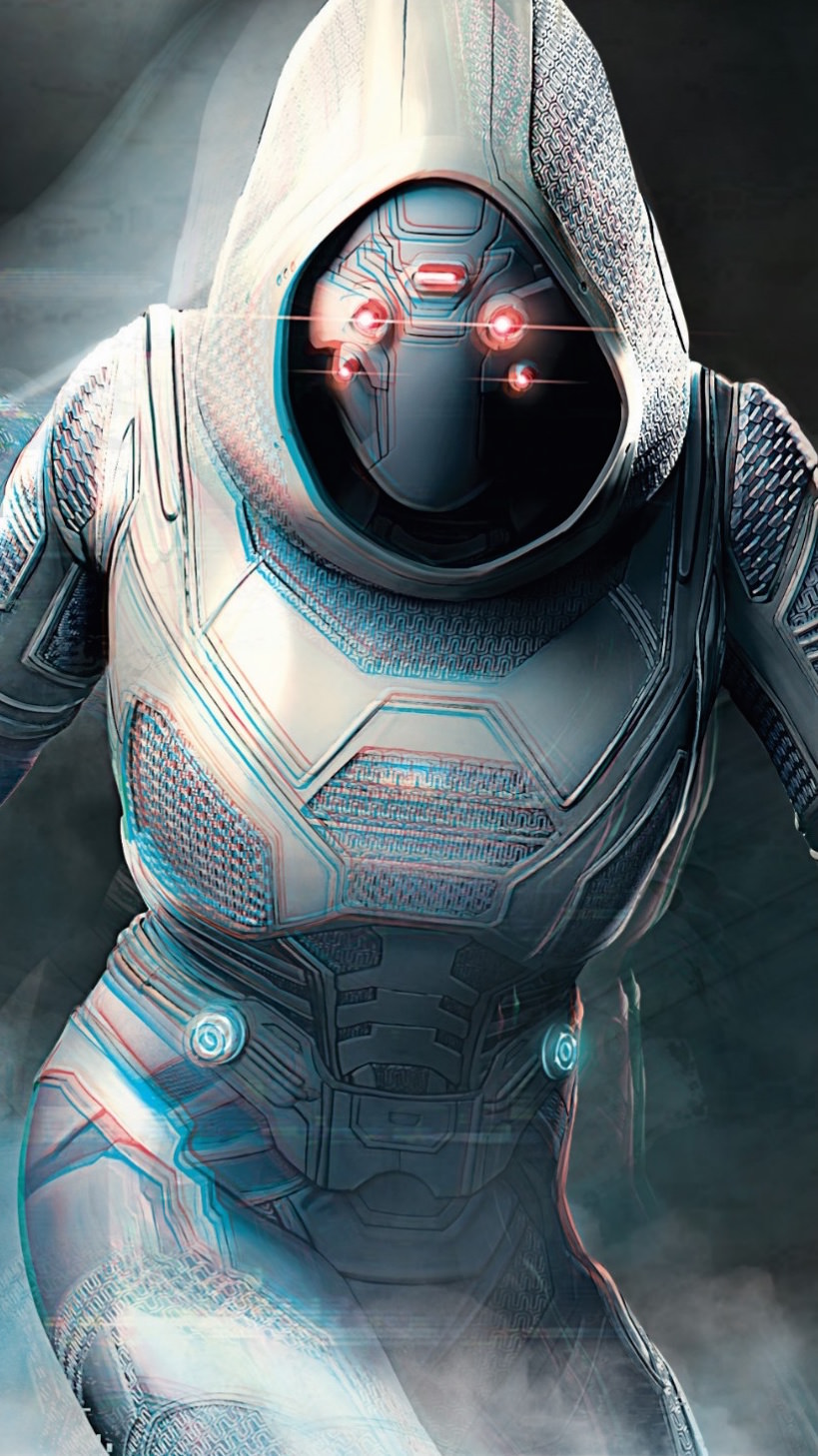 The character make her first cinematic appearance in Ant-Man and the Wasp.  She is played by actress Hannah John-Kamen.


"There is a big bad that has a very unique relationship to our characters. And I know you know that the character Ghost is in the movie, and that we’ve adapted the character from the comics in a way that we feel is really unique to our movie, and very much tied into this universe. So, she becomes a really, really crucial part of the story in a way that I can’t really reveal yet."


"We thought that was a cool opportunity to create a character that was all about mystery, and kind of what the origins, what is the backstory, what is the goals and agendas of this person, was a great vehicle for the story we wanted to tell because Ghost, in the comics itself was a mystery,..on a mission at odds with our heroes on this journey, but of a similar goal, of a similar aim at the worst possible time for Scott Lang."