Van Sciver's Cyberfrog: Blood Honey is successful but why? 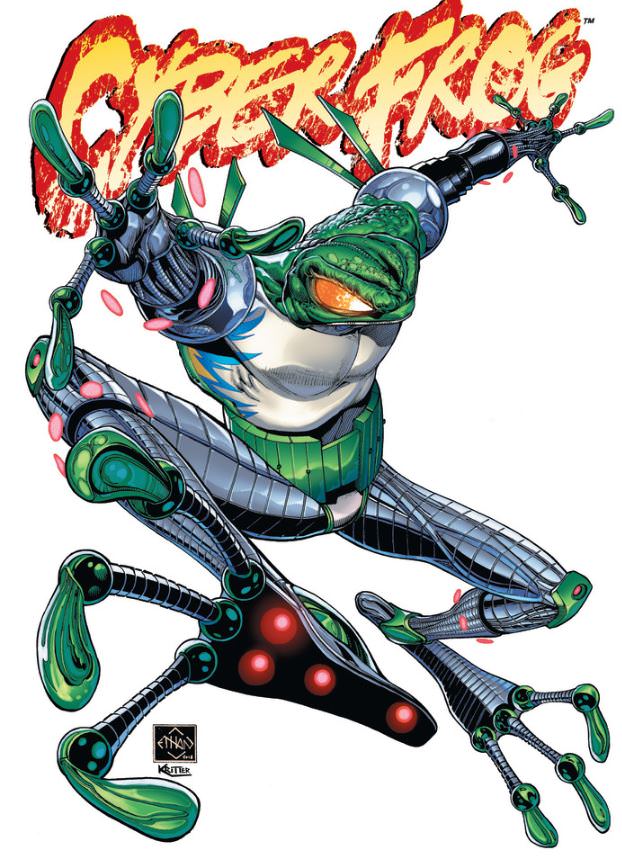 While the major Comic Companies struggle to find direction and tone that fans will purchase and IndieGoGo is a grave yard of pitched comics that never found a dime a  comic about a frog hero from the 90s that most have never heard of has hit the comic world like a freight train.

We are talking about Ethan van Sciver's Cyber Frog!
https://www.indiegogo.com/projects/ethan-van-sciver-s-cyberfrog-bloodhoney-comic-book-fantasy#/


Update: 3/11/2019
Ethan Van Sciver just came out with a few updates on the Cyberfrog project.  A couple of hightlights it sounds he is down to the Lettering process which is definetly toward the end.  We are still keeping our Summer of 2019 estimate for delivery.  One major thing he has down is increase the size of the comic from 48 to 88 pages.  So while the project is coming late it will come with double the content as was intitially planned.   He also released a few more pieces of art that you can see below.

Another mention is that there will be a future black and white release of the comic for those who did not buy it through the Kickstarter. 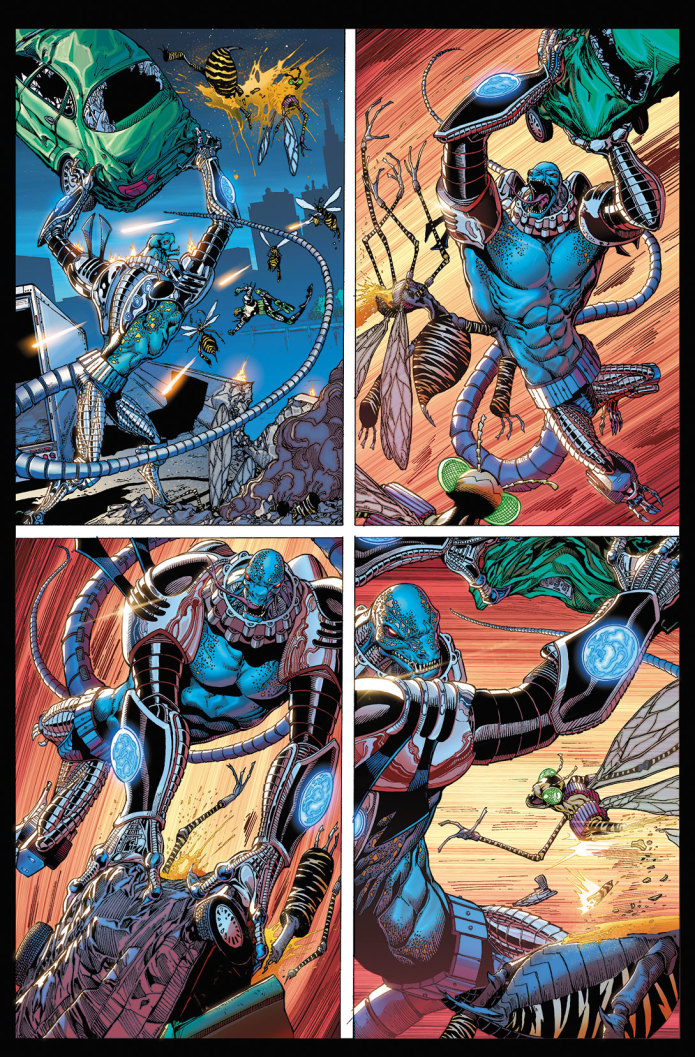 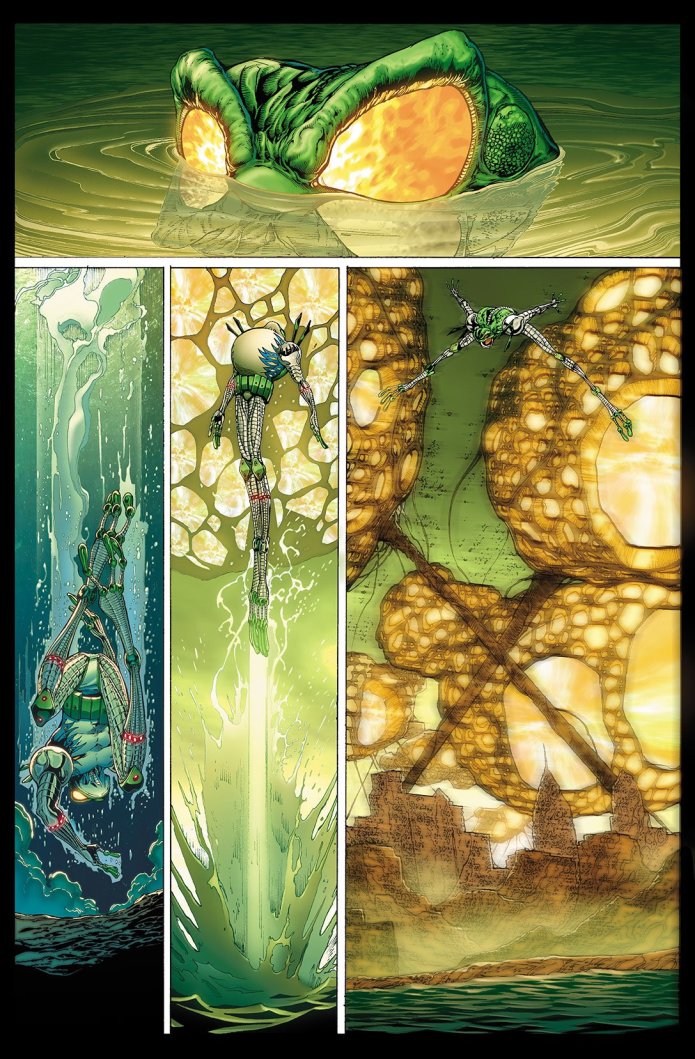 Update: 2/4/2019
Here is an update from Ethan Van Sciver on progress of Cyberfrog.  He shared some art from the series as well.  He mentions that Bloodhoney will soon go to print.  This is as of Jan 9.  My guess is that the comic will come out in and around the Summer of 2019  That is purely my guess and is not official..  The series is delayed from its original goal causing some consternation on the kickstarter comments however many of Ethan's fans remain postive being happy with the artwork he has shared so far.

All right! I’m drawing the last scene of CYBERFROG 1998, in which CYBERFROG and Salamandroid deal with a super villain threat called RumbleBee and the Pollen-8, a gang of old enemies who actually look like bees, which adds to the confusion of the Vyzpzz invasion. They’re all from Philadelphia, so it’s fun to write their dialogue.
1998 and AMPHIBIONIX will go to print soon, and BLOODHONEY will follow. Every panel of these books is my heart and soul, and there are many people who want this project to fail. It will be looked at with critical eyes by people who are upset that an independent project by me did so well. I invite this kind of criticism, and I’m working to offer a book that will last forever .

CYBERFROG isn’t just a comic book, it’s the start of a new way of thinking about comic books. Books that stay in print, that are EVENTS , that are worth reading and re-reading. Not disposable, frequent periodicals, but a work of permanence. I believe this is the inevitable future of comic books. It has to be. The world is evolving, and mainstream comics aren’t sustainable using the structure and methods that they currently rely on. Comic retail stores are closing at a rapid pace This is the FUTURE,


This book was estimated to be released in November, and I know it’s running behind, but I want you to know that it is coming, and it’s just the beginning Your pledges have allowed me the ability to do this, and to do it correctly. Not quickly and poorly. Meticulously and memorably. With all of my heart.
And with that in mind, I thank you again for your patience, enthusiasm, faith and support. You made this possible. This is your victory, and I know you will prize your perks as proof of that.
Here’s some frog. 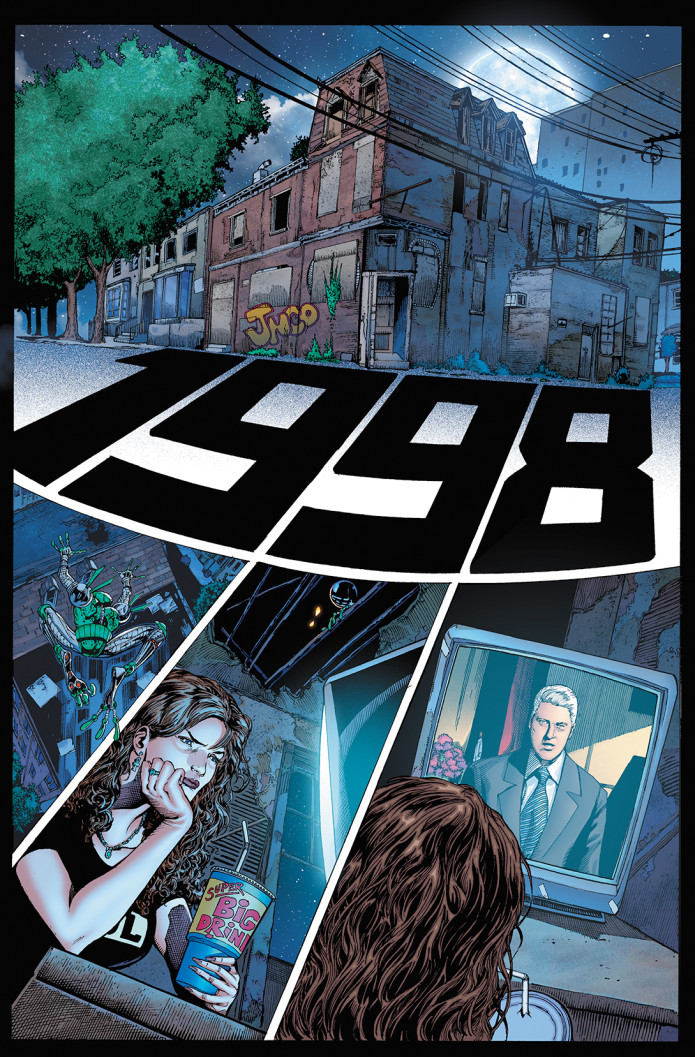 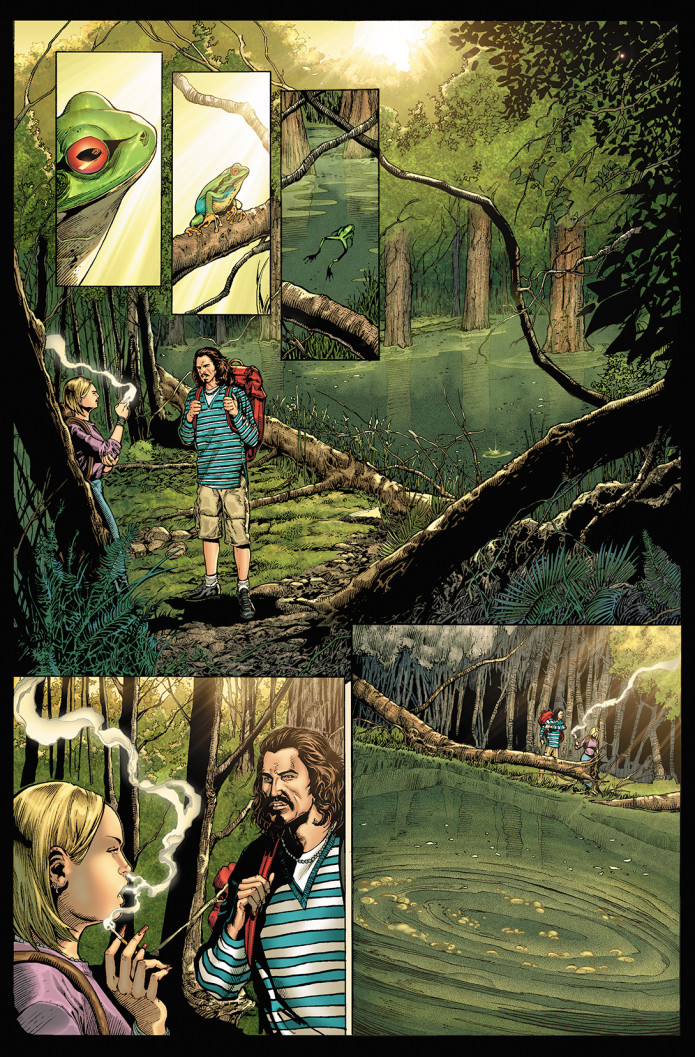 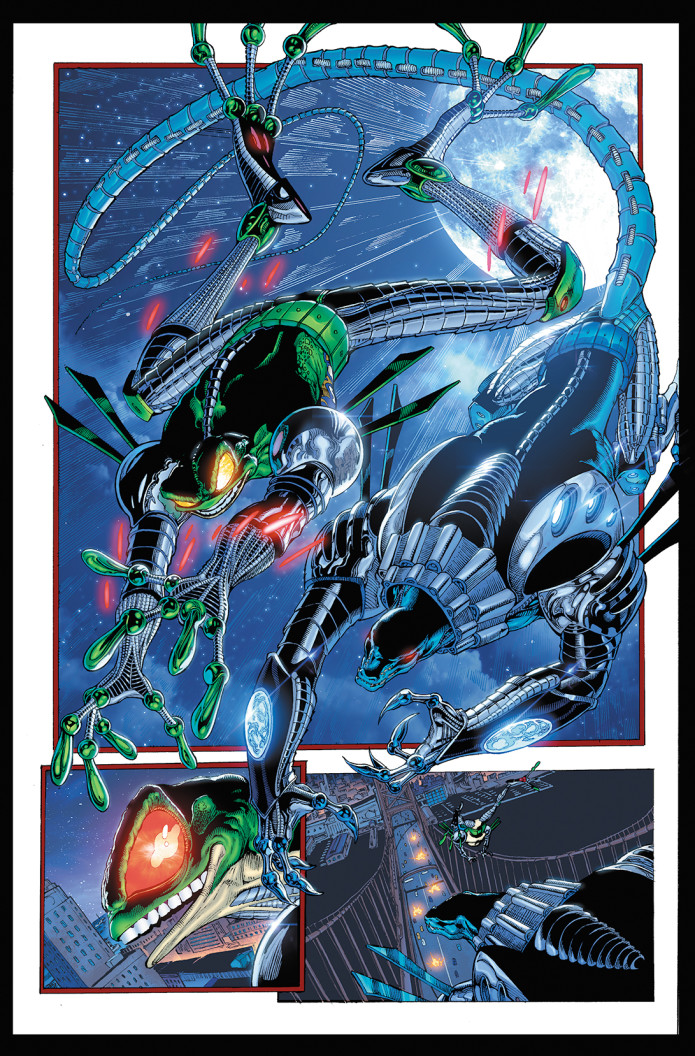 Update: 7/19/2018
The financial power of Ethan Van Sciver continue to surprise.
The first campaign for Cyber Frog hit $538 thousand.  Two days ago, Ethan Van Sciver created a 2nd campaign using a Variant cover.  Van Sciver states that if this campaign crosses over $50,000 then 10,000 would be donated to a Men's Cancer Charity.  After the 2nd day the campaign is at $40,000.  As of currently checking this campaign it is sitting over 42k.


I am thrilled to relaunch this campaign for those who missed out on the limited time funding of CYBERFROG: BLOODHONEY, with an exclusive new variant cover for the first part of an EPIC CyberFrog story. I am pouring my heart into this. Having worked at DC COMICS as the artist of GREEN LANTERN, FLASH:REBIRTH, SINESTRO CORPS WAR, and DCU REBIRTH, I can promise the highest quality, and a lot of fun! Did you miss out the first time? Here’s one more chance to hop on board!


Want CyberFrog now? Well here is what is available now on Amazon:

Original:
Ethan Van Sciver the well known Green Lantern artist has launched the project to bring back one his own characters and his IndieGoGo is now up to astonishing $430,000 and growing.  That is phenomenal amount of money for a comic like this to generate.

CYBERFROG: BLOODHONEY has now surpassed $430,000 in sales. But has the comics industry taken note?

LOL. Thanks everyone! There’s still time to place your order for this book! Be a part of comics history!https://t.co/FpTVxVLLEs
— ComicArtistPro Secrets (@EthanVanSciver) July 8, 2018

On top of the success of the Kickstarter the original 90s.CyberFrog has been listed as the top increase in value of all comics by Invest Comics.

There is nothing overtly political about Cyber Frog or  his IndieGoGo campaign.  Also Ethan Van Sciver's sales pitch with the hero is to simply make it feel like a 90s comic.  Back when comics were highly collectible and by that he has a cover of using a foil cover.

Ethan Van Sciver's is often associated with the ComicsGate crowd a group that often is shown lamenting the rise of Political Propaganda being forced into comics by comic creators.  The movement often takes pot shots at the new Star Wars film The Last Jedi.  They also often have critical comments directed at comic book creators for either supporting Social Justice Warriors "SJWs" or for being SJWs themselves.  They also claim that the comics industry has silenced creators and artists who hold dissenting opinions.  I would post tweets or extended arguments about them or their opponents but the reality of it is this.  It lives on Twitter and therefore is a complete mess of trolls on both sides and its impossible to sort who is who  and what is what.  I really don't want to wade into that.

The major point of the movement though is that comic sales are going down because comic book creators have lost touch with their market and their political agenda is not only not shared by the customers but rejected by them.  They point toward massive sales declines at Marvel over the past year and claim the losses were due to this political factor.  Another major claim is that there is a lot of money on the sidelines that is not entering the industry because of politics.

When Cyber Frog is viewed from this light it could be seen that this movement is putting its money where its mouth is.  Does this prove the movement right?  I would not go that far but it does validate the position that there is money on the sidelines.  Either that or the market for Sci Fi Frog heroes is much higher than I initially expected.  It might be a bit both.  The controversy around Sciver might be drawing attention but the character of Cyber Frog is also reeling them in.  You can laugh but look at the Cyber Frog art.  It has an undeniable cool factor to it.  The success of the comic will no doubt be a major topic of retail discussions this year.

One thing is for certain Ethan Van Sciver is extremely talented, and whether his art is for Green Lantern or for Cyber Frog it is sleek and cool.  The new comic he created is going to be one that is going to closely watched in a comics community that in many ways is searching for direction.

While a Sci Fi Frog super hero may sound silly you have to admit that Sciver's art looks very cool.  You can check out more of the art work at: https://www.indiegogo.com/projects/ethan-van-sciver-s-cyberfrog-bloodhoney-comic-book-fantasy#/ 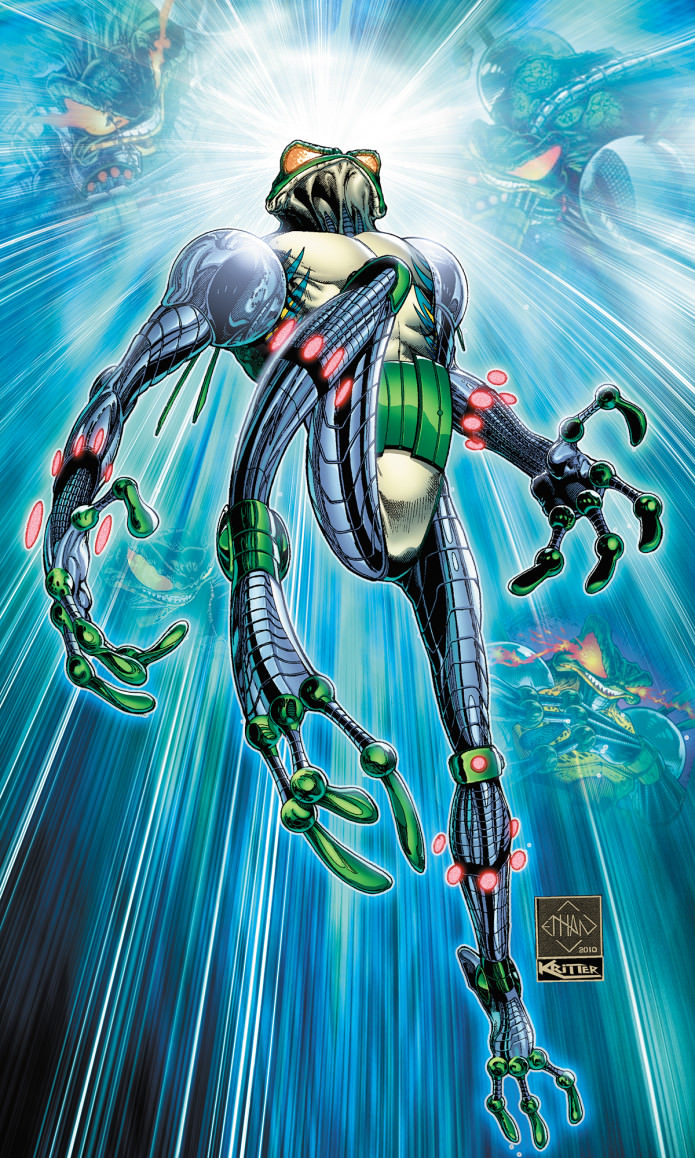 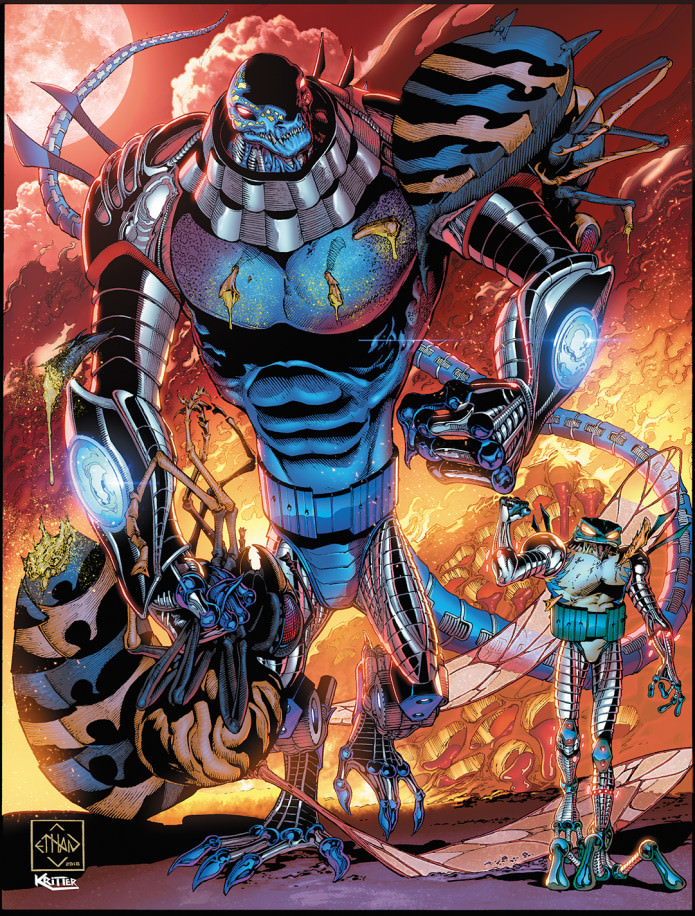 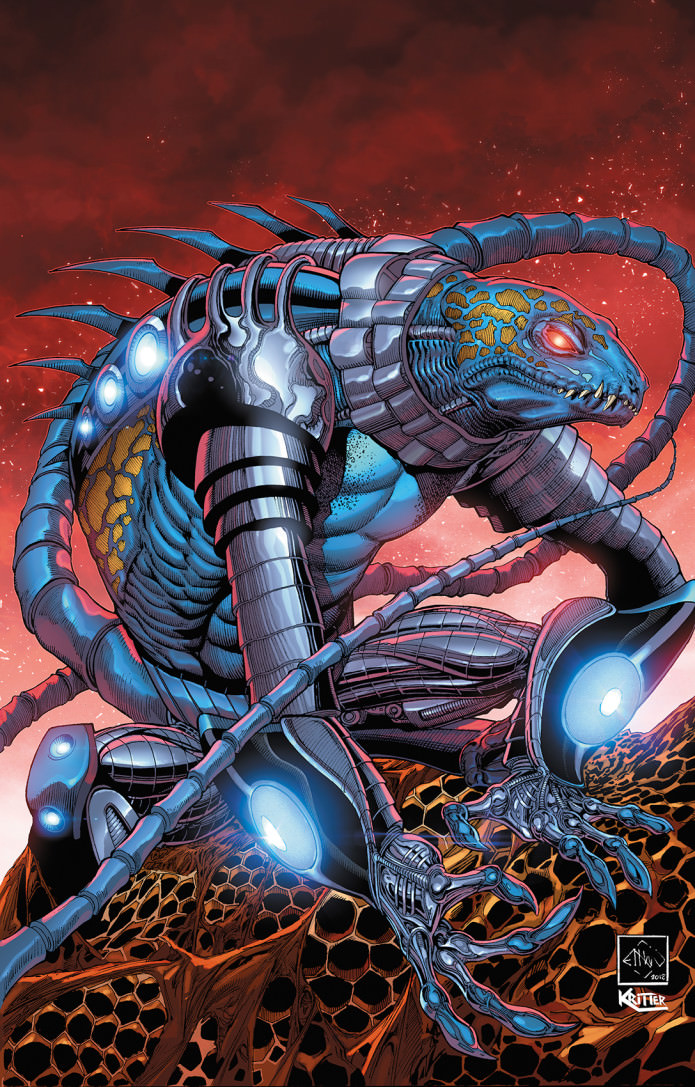 You can blame Aeon River for this Sh BEEP:
Yell at me on my Facebook or ya know just stop by and say hi.  I'm mostly active.  And I am nice all the time that I am not being a complete and total dick.
https://www.facebook.com/aeon.river.54