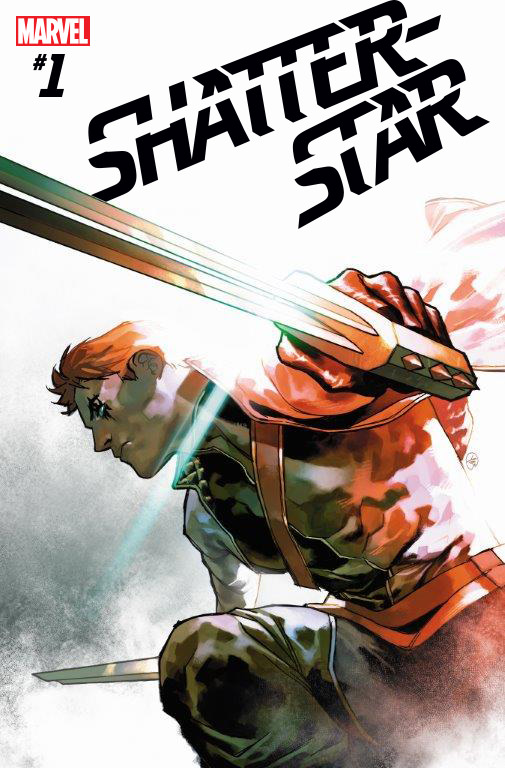 Shatterstar gets a Solo series

Fresh off making his first film appearance in Deadpool 2 Shatterstar is going to get his own solo series.  I do still need to do a From the Vault of New Mutants #99.  I have the comic literally sitting out on my coffee table ready to reviewed.  It should be a great review as that comic while often overlooked has a lot of amazing stuff in it, including the first appearance of Shatterstar.

Going to come out and say it.  I really dig the idea of a Shatterstar solo series.
Shatterstar is a weird character, I hear that a lot like it is a slam on him.  Its true, he is weird but sometimes weird is interesting and entertaining.  He is also in my opinion completely unique.  I can not think of any character quite like him.  Another cool thing about this series is that Tim Seeley is writing it who does excellent horror and weird style stories.   In the news from Marvel Seeley says: "My interest in him now is more in the ‘hardboiled noir’ aspects of the character,” and Marvel goes on to compare the story to John Wick.  A noir John Wick story for Shatterstar can we get a HELL F$^##ing YES! Come on this is going to be good.

I am not sure what direction he will go in exactly but I have a feeling it will be worth its cover price.

And Yes I am working on that New Mutants #99 review.

Shatterstar's new look.  Tim Seeley has been teasing both a mystery villain and a new gunslinger like look for Shatterstar.

Another lil' sneak peak. (I'd be afraid we're showing too much, but we haven't even revealed the mystery villain yet!) From our October debuting #Shatterstar series. @Cfvillaart 's designs for our bad ass hero: pic.twitter.com/WAkCnRIzIW
— Tim Seeley (@HackinTimSeeley) August 29, 2018


Riktor who is Shatterstar's sometimes boy friend is also being redesigned for the series.

Liefield the creator of both Deadpool and Shatterstar has said he likes the design.

How do you expect me to keep calm and keep churning out pages like this?
I am so happy right now. Thank you for your kind words on our new design for #Shatterstar mr. @robertliefeld . ⚔️ pic.twitter.com/qzRpj8FwsR
— C.F. Villa (@Cfvillaart) August 29, 2018

More on the comic from Marvel.

On October 3, the mutant called Shatterstar decides to go it alone.
A gladiator, a warrior, and a Super Hero…Shatterstar has been many different things, but throughout it all, he’s always been deadly. This fall, enter the darkness with SHATTERSTAR #1!
Written by Tim Seeley with art by Carlos Villa, the limited series will be a new birth for the long-beloved character. “I was 12 years-old when I first saw Shatterstar in the pages of NEW MUTANTS, and I was the perfect age to be intrigued by him,” the writer explains. “The dude’s an alien gladiator! And within pages of us meeting him, he stabs himself with his own swords in order to kill the bad guy standing behind him.”
Seeley’s perspective on the character has evolved since then, and it seems that very evolution may be a focus of the new series. “My interest in him now is more in the ‘hardboiled noir’ aspects of the character,” he says. “He’s this guy whose life was violence for sport—and now he’s trying to move on from that. But it’s such a thin thread that keeps him in this new line of lawfulness, and it’s an easy one to break.”
What was Seeley’s pitch for this new book? “When the life he built crumbles, Shatterstar is forced to ask himself if he truly ever gave up the gladiator ring. The series will be part John Wick, a dash of Will Eisner’s A Contract with God, and infused with lots of lots of interdimensional X-Men Super Hero mythos.” Speaking specifically about that X-Men lore, Seeley says he was inspired by classic ’80s and ’90s X-Men stories: “I really stuck close to the Fabian Nicieza, Rob Liefeld stuff—especially those last few issues of NEW MUTANTS where you can see the purest form of this guy. I also really leaned on the LONGSHOT limited series by Ann Nocenti and Art Adams, as well as the ‘Shattershot’ storyline from the old X-Men annuals.”
Shatterstar has been many different things. On October 3, discover who he is now as Tim Seeley and Carlos Villa present SHATTERSTAR #1!
on August 30, 2018