Companions of the Silver Apple have a meeting with a goddess

To go back to Previous Chapter -Click here for Chapter 4: Goblin Arrows INCOMING!

While escorting a wagon of supplies toward the town of Phandalin they are ambushed by a pack of goblins.  There are signs that the goblins also attacked and kidnapped Gundren Rockseeker and now the party has come to a goblin cave where they hope to rescue the Dwarf.

The Companions currently Include L'lyssa the Halfing Thief, Anorak the Elf Wizard, Percy the Human Fighter, Kalisia a mysterious bard, and Kat a human fighter with adeptness in archery.  They are about to be put to the ultimate battle for their lives.  They are now Level 2 and will face a great challenge when nothing goes to plan.

The companions are not in good shape after barely penetrating the cave they were sniped at by hidden Goblin archers and then rushed by a pack of snarling wolves.  They have decided to rest up and regain their health.

The party is afraid that goblins will attack them as they sleep and decide to keep watch.
Kat took on the first watch, while Anorak being an elf also remained awake in a meditative state.

It was night and it began to rain.

L'lyssa wakes up to a voice.

It sounds powerful, female, authoritative and it wakes her immediately.  She has trouble figuring out where the voice is coming from, it seems to come from every direction.  Then she sees ...them.
Three women walking toward her.  Each one carrying a Silver Apple.  One is an elderly woman, one is an adult and one is a little girl.  All three have eyes burning with electrical blue bolts of lightning.

L'lyssa barely chokes out, "Who, who are you?"

Each of the 3 figures cock their head, as if sizing up L'lyssa and began circling her like a pack of hunting wolves. 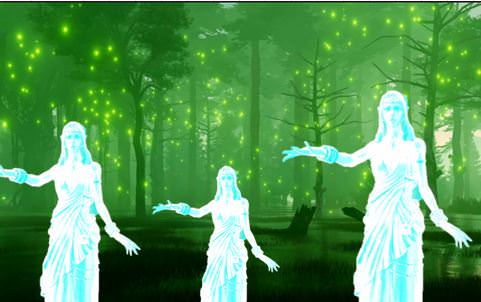 "I was......torn, broken, pulled apart, now because of you I have begun to bring myself together again."  This came from the adult Mystra.

"BUT YOU OFFENDED ME" Screamed the girl Mystra.  L'lyssa's hair stood up on end.  As she began trying to process what it was she was encountering.  In Neverwinter L'lyssa had impersonated the goddess of Mystra to make one of her followers surrender a rare magical Silver Apple.  It had been rumored that Mystra had died or ceased to exist for a about a year.  L'lyssa's action apparently had a bigger impact than she had anticipated.

"My followers are growing," The croneish Mystra said.

"YOU OFFENDED ME" The child Mystra screamed again.

"My powers and conscience seem to be drawn toward your person"

"YOU NEED TO BE PUNISHED" The child mystra yelled.

The three women continuing circling and then moved closer and reached out their arms forming a full circle around L'lyssa.  Their aspects merged into the single adult woman.  She was at first kneeling, then she rose silently eyes blazing in power as she stood over L'lyssa.

"You have given me a great gift and insulted me.  For that I too will give you a great gift but I too shall insult you.  From today until your end you will be my herald, my right hand in this world.  You will do my bidding, or you will suffer.  If you serve me you will be rewarded with power, if you do not you will wither".

With that the adult Mystra placed her hand on L'lyssa's face and she felt the sensation of immense burning, as if her entire body were lit aflame.

Anarak already nearly awake was quickly at her side with speed fit for only an elf.

"What is wrong," he said as he approached, then upon seeing her face a shocked look came across his face.  "Merill Ta Ooghma!"

L'lyssa glared at him, what the heck does that mean.

Anarak blushed, "Pardon me, its a curse word from my priesthood, it means rotten scroll of Ooghma, very foul of me, I apologize."

"Rotten Scroll? What kind of crappy Elvish cursing is that.  Nevermind, never-mind what is wrong with me? That dream was sooooo real?"

Anorak began to regain his composure and knelt beside L'lyssa.  "I don't think that was a dream."  He pulled out a pocket mirror and handed to L'lyssa.  Looking at her reflection her mouth dropped.
"My EYE!"
Around one of her eyes was a hand print where the skin suddenly vanished and in its place appeared to cosmic space, with planets and stars.  Burning bright were stars in the tips of two of the prints fingers.  Her eye glowed unnaturally with power like chaotic prisms of light. 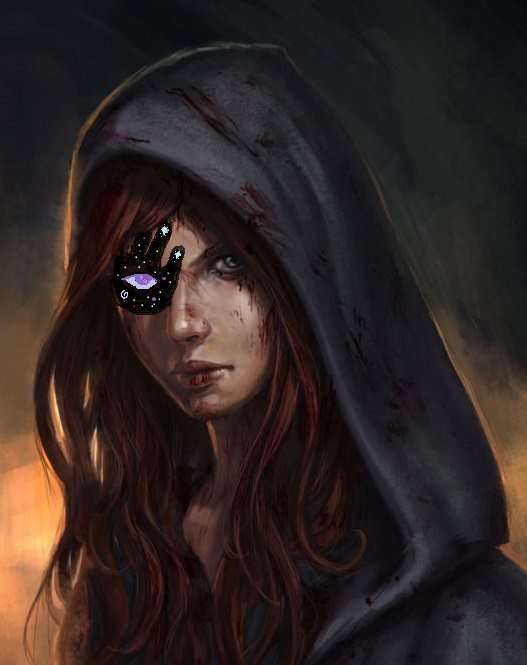 "Tell me about your dream" Anorak said calmly.

L'lyssa did her best to relay the strange events of the dream to Anorak.  Anorak trained in religion as Acolyte and a Wizard passed a religion check and gain some further insight into what happened.  "When you impersonated Mystra in Neverwinter it seems that you may have caused her to gain more followers and they gained more faith.  Her presence has been waning and for sometime many have thought she was destroyed in the spell plague.  Now it seems your actions have given her the boost for her to return.  Obviously she is grateful and perhaps even tied to you for this.  However,....impersonating a goddess."  Anorak winced "Is not good. It seems the goddess has weighed these two factors and giving you both a gift and a..."
"Curse" L'lyssa said flatly.

A silvery scroll appeared and dropped down before them.  It was written in an ancient language but Anorak once again passed a religion check and read from it.  The scroll explained that each finger lit on her face represented a favor for Mystra and could be traded in to use one of 5 Powerful spells.  The spells included Greater Invisibility, Mordenkainen's Magnificent Mansion, Feather Fall, Evard's Black Tentacles and Dream.  However, if the all the favor's are used L'lyssa would immediately begin withering away.  Mystra can add favors or remove them based off your actions.

After finishing reading the scroll disappeared into the air.

"It seems" Anorak said solemnly, "Mystra has made you her herald both a gift and a curse.  L'lyssa swore loudly and this one was not about rotten scrolls.


To continue on to next chapter click here Ch 6 Rescue in the Goblin Caverns!


Ch 6 Rescue in a Goblin Cavern