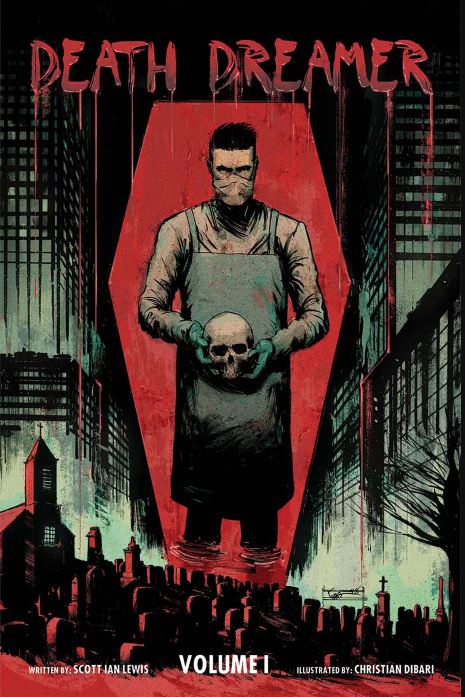 What is Death Dreamer? It is a Kickstarter comic by Scott Ian Lewis the frontman of Carnifex that is going to have a massive promotion at San Diego Comic Con.  The comic is about an embalmer named Troy Graves working mortuary begins stumble into a mystery where bodies seem to be both appearing and disappearing mysteriously.

Death Dreamer, the debut graphic novel from writer Scott Ian Lewis, is celebrating a fully funded IndieGoGo campaign, raising over $30,000 for the first volume. Now the singer for the leading death metal band, Carnifex, is ready to take San Diego Comic-Con by storm with multiple signings and a live concert appearance.

“I’m incredibly excited to see Death Dreamer realized and published for the first time,” remarked author Scott Ian Lewis. “I want to thank all of those who backed this project personally, it’s something I’ve put my whole self into and I’m ready for this story to be experienced.”

Saturday, July 14, Grill ‘Em All will host the Death Dreamer Book Launch Party presented by Blackcraft. Scott Ian Lewis will sign copies of Death Dreamer Volume 1 from 12 PM on. Specialty drinks and a custom vegan menu will be available for fans and backers wanting to be the first to get their hands on the new book. This is a free event.

Saturday, July 21, Lewis returns to the exhibit hall for his final signing with his record label Nuclear Blast America, booth #501, from 3PM-4PM.

The Death Dreamer crowdfunding campaign began June 11th and saw overwhelming fan support leading to a successful funding just over two weeks. The campaign for Death Dreamer will continue to run through July 18.
on July 09, 2018