What makes Loki so popular? 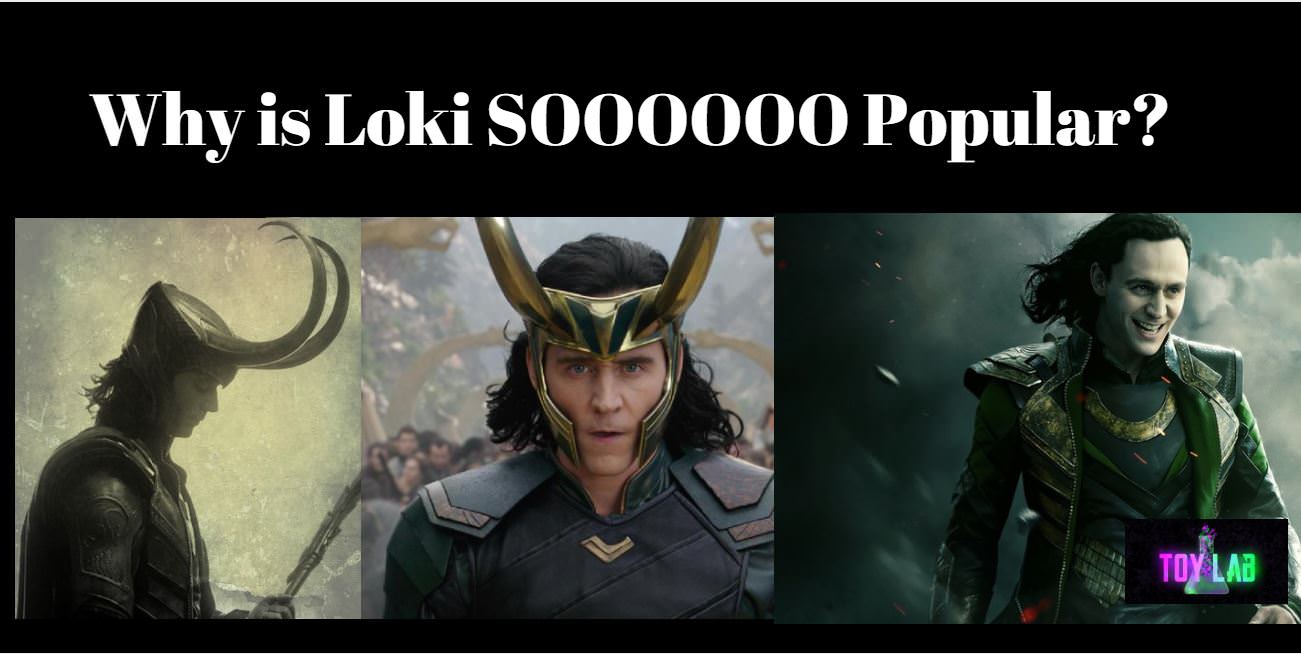 Why is Loki so popular?

In the highly successful Marvel universe there are a variety of characters and their related actors who have become extremely popular and icons humanity.  They are funny, heroic and ooze sex appeal.  Whether they are walking red carpets in suits or through misfortune find they have lost all of their shirts and are forced to reveal glorious rippling abs to the world, they walk through throngs of infatuated fans.  Chris Hemmsworth, Chris Pratt, Chris Evans, and Chadwick Boseman these chiseled actors can do no wrong. There is one other actor who does not portray hero who none the less walks among them, his abs are shown less often, his muscles less bulging, his face less rugged, and yet the crowds flock to him just like the others.  His name is Tom Hiddleston and he plays the villain Loki.

Not only does he play the villain but it could be argued that the cult of followers of both Tom Hiddleston and Loki are stronger than all the others.  A small amount of research finds Fanfiction about both Loki and the actor, there are Valentines and then there are even these:

What are these? I found them on a site called Dear Hiddles.  No I did not make that up.  They are not quite Valentines more like images to send among Hiddleston's adoring fans. 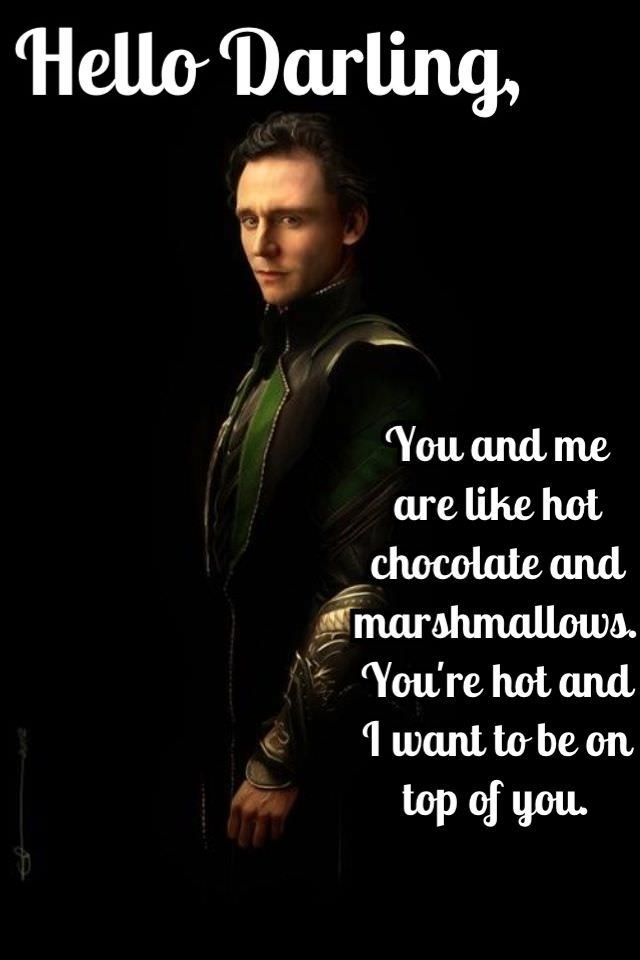 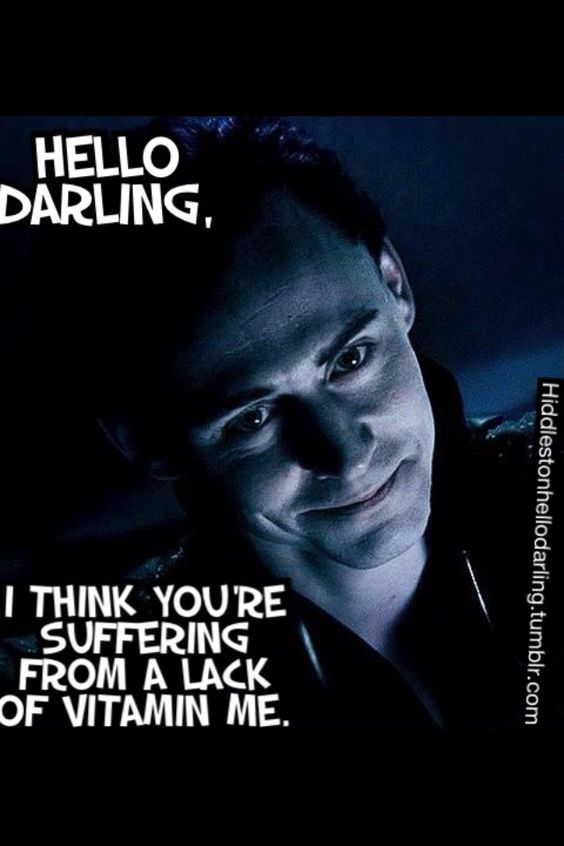 There are entire tumblr accounts that do nothing all day but churn out pictures of Loki and Tom Hiddleston.   There are blogs that explore his sexuality in different ways sometimes hes leaning one way, sometimes another.  Sometimes he is even into horses.  There are fan made comics, hell some look like novels.   Heaps and heaps of different Loki products.  Hey speaking of Loki products how about you check out some of these fine products.  (Yes, I am going to plug my own blog, hey it helps me hire writers and gives you stuff to read).


Loki Lover Products
Loki lovers we have products right here specially chosen for you.  Toylab is part of Amazon Associates and offers from products through Amazon.

Some of the stuff on Loki is pretty silly.  Some of it is pretty cute.  I actually really enjoyed this. 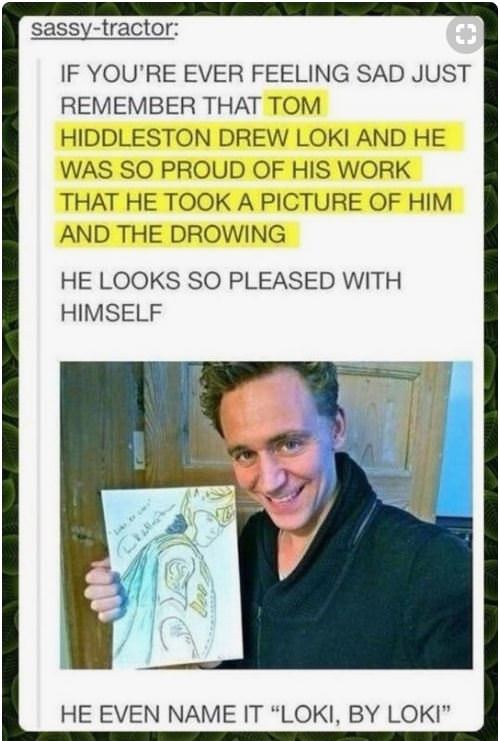 Come on if that does not make you smile your not human.  Yes its fun and cute.

Though I still have a hard time understanding why all of this exists.  Why are we seeing Tom Hiddleston and Loki and not Josh Brolin draw Thanos.  Why are we even seeing Loki at all.  Loki is after all a bad guy, he show signs of extreme narcissism, arrogance and psychopathy.  More than once he has tried to conquer all of Earth, yeah and folks that is us.

The common answer I hear is that Tom Hiddleston is so good and magnetic as Loki that  he has become popular as a result.  I don't disagree with this entirely.  Tom Hiddleston is a FANTASTIC LOKI.   Yes, I can see he is handsome and charming.  I am not going to dismiss any of the charms he has at all.   But, I  feel there is something more here as well.  There is some deep current that is running through us and giving Loki a kind of gravity.  Hiddleston and Marvel have tapped into something but what?

Let look at one more thing.

My own personal favorite Loki item does not involve Hiddleston perse  (Though the Loki that appears is highly based off his depiction).  It comes from the comics where he teams up with Spider-Man.  This happens in Amazing Spider-Man #503 and #504.  Loki is full of his usual menace, and arrogance but he also shows human moments of genuine caring.  The series also has fun with the team up of arrogant immortal and the authority disdaining people's champion of Spider-Man.  My favorite page is one of the most popular pages of Loki ever created.

In this page Spider-Man sits on the roof top of a New York Building and shares a hot dog with the Norse god of mischief.


It is just one page.  A few panels.  Nothing more.  But...Something about it says volumes. 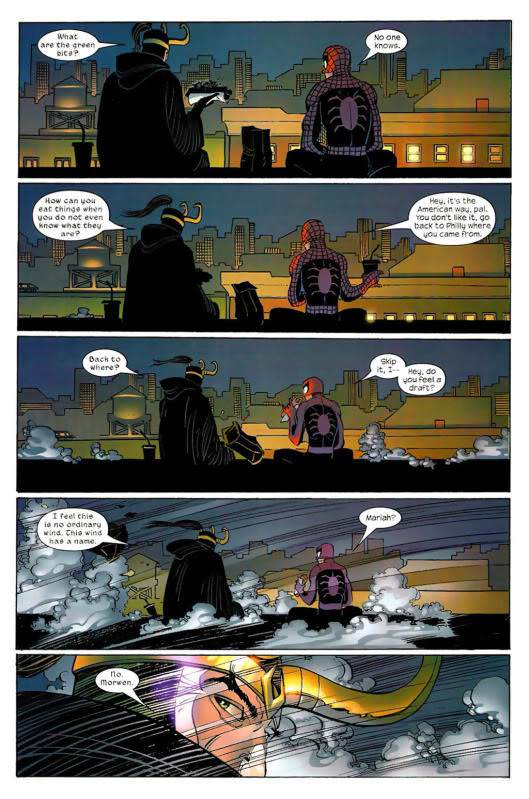 Why is this image so powerful?  A hero and a villain sitting down, together, talking and eating a hot dog.  I think it has a surrealistic quality to it, where something normal is happening, but it not something that is supposed to happen.  The rest of the comic also has some humanizing moments with Loki.  Spider-Man and Loki learn that the poltergeist villain they are fighting has possessed one of Loki's human offspring.  Loki shows real concern for his daughter and he want the villain defeated without hurting his daughter.  He is still is bad, power hungry and a super villain but he is also vulnerable and human....ish.  He is totally and entirely captivating.

Alright, Loki is popular lets move on to the real question  Why is he so popular?  Here are some reasons?
1) The character of Loki was upgraded by Tom Hiddleston
2) Loki is a personification of scheming forces that mean us ill.
3) Loki is a wild card

Loki was upgraded by Hiddleston 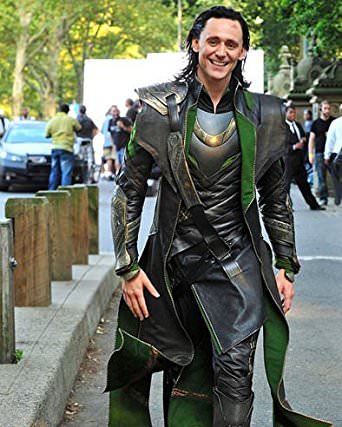 This comic page, sticks out in part because it is imbued in some way with Hiddleston-isms.  Yes, this moment occurs in the comics but it is instilled with bits of Tom Hiddleston.  This is one of the interesting things that is occurring in comics now.  Comic ideas are going into the films.  The actors and producers are tweaking them.  Then those ideas are being recycled back into the comics from which they originally came.  This version of Loki has been tweaked from his older comic version with some added elements from Tom Hiddleston.  Even if an actor wants to play a comic character exactly like the comic page they still add bits of themselves.  Why? Well they provide a real human face, that has real human emotions and those features and feelings are always more real coming from a human than they come from an imagined character.

It is definitely this new Loki that has the Hiddleston-isms that has become super popular.  Now Loki was not nobody before, Loki of course comes from the Norse Mythological Pantheon and thus he effectively exists in both the Norse and America Hero Mythos.  In the comics, Loki was the villain that effectively created the Avengers when one of his schemes went awry. So he was there, he was a big deal but generally he had less depth as a foil to Thor.

Characters in theater tend to have a lot of depth and one of the reasons I think that is, is that writers write them and then actors add themselves into them and they become literally fleshed out.  This is very much what happened with Loki.  In fact Hiddleston even mentions how he used Shakespearean character to influence how he played the character.

In an interview with Assignment X Hiddleston explained how he used Shakespearean character to add depth to his Marvel character.

Well, the thing that I suppose is closest to my heart is Shakespeare. I really am a nerd about Shakespeare, I love it [laughs] and the reason why is because he’s one of the wisest, most compassionate writers in the course of Western literature, in the course of all literature. And he understood human nature so deeply, not just our great capacity for virtue and for goodness, and for love, but our capacity for pain and destruction and anger. His bad guys are the best bad guys in the biz, like Iago in OTHELLO and Edmund in KING LEAR and Cassius in JULIUS CAESAR. And they were touchstones for me in terms of, when I created Loki with Ken Branagh, we talked about Edmund the bastard son, someone who’s grown up in the shadow of another man. In KING LEAR, Edgar is the legitimate son, the elder son, the favored son, and Edmund is the bastard, the illegitimate, the one who’s less loved, under-loved, which feeds his lack of self-esteem, and then Iago is the ultimate chess master, the incarnation of evil, somebody who’s bringing people down and you’re not quite sure why, but he’s motivated by some terrible jealousy and ambition. And then MACBETH – Macbeth is undone by his ambition, and I think the same is true of Loki. So I guess those are my touchstones.

I think these elements really added layers to the character of Loki.  In particular, I think it added vulnerability, weakness, shame, hate, and guilt.  I think due to this Loki became more intriguing.  People in Loki may see themselves at their worst.  The audience ends up rooting for his redemption, they hope that he finally has turned the corner toward goodness and that he will be redeemed.

Loki the Personification of Scheming

People may be working out their fears by looking at stories based around villain or monsters that personify lying and scheming.  Loki is a great example of type of character.

Monsters are necessary.  In all cultures there are monsters and villains and in all culture they go in and out of popularity.  One way to see this is a random occurrence but I tend to think that vampire or zombies come in vogue because they describe certain fears that inhibit the populace.  Seeing heroes deal with monsters and villains is a way for humans to deal with something.  A lot of times these fears are not human or physical things like the fear of lies, or the fear starvation, the fear of society collapse.

Both sides of politics in the United States right now seem to be highly concerned that the elites and institutions are lying to them.  The Right is concerned with the Media (Fake News) and the FBI.  The Left is concerned by the President and the Police.  Both feel that they are being lied too.  They feel that their are schemers.  There is even a term called the Deep State or a group of scheming neer do wells in government.  Loki is a character that taps into that uncertainty created by his duplicitous nature.  In Loki we see that schemes can be defeated by the might of truth in Thor.

Loki is also defeated by Thor appealing to his better nature.  Perhaps this pulls on people hope that both redemption is possible and that the schemers may come to their senses themselves.  While Loki normally goes back to his evil routine, he does provide glimmers of hope that he can be good.

Much like the Joker another very popular villain, Loki is unpredictable.  Loki is not strong enough to take on his hero directly and instead is forced to use his mind and trickery.  This means that he is an expert at surprise and anytime he appears neither the heroes nor the audience/ readers know what he is going to do.
Villains that have this quality always have intriguing stories because readers have trouble anticipating what is going to happen.

These are few reason that I see why Loki is popular.  What do you think?  Why is Loki more popular than Ronan, The Destroyer,  or the Red Skull?