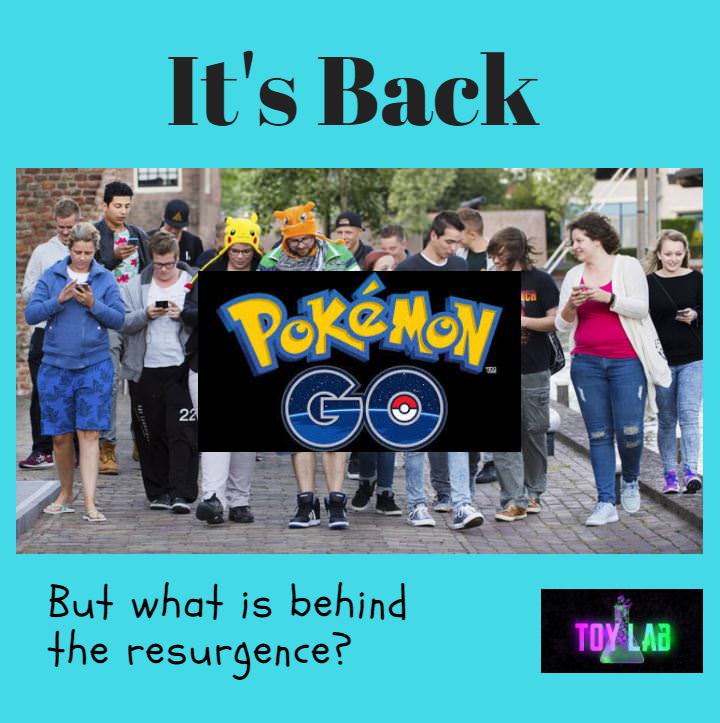 Pokemon Go was huge over the summer of 2016.  The Toylab site that normally gets between 50k and 100k views a month at that time was getting a full 100k views just from posts on Pokemon Go.  In effect Pokemon doubled the amount of people coming into our blog.  That is crazy.  Now it became a challenge as to how we balanced our usual comic focused content along with Pokemon content.  Do you do 1 comic post and 1 Pokemon post.  How do you keep both group attracted.  The one thing in particular we did not want to do was lose our bread and butter fans.   At Toylab we had a lot of conversations on this issue but in the end it was good for us.  We opened ourselves to some new content and to an extent that has continued.  Now we have even begun adding other things whether it be cosplay or D&D.

Pokemon Go for us kept going strong through Dec 2016 and then began sharply declining until Feb 2016.   It still maintained some views just not the crazy amount of views and interest it was gleaning back in that summer 2016 period.
Some groups did begin noticing a decline in interest much earlier.

This chart I pulled from an old article at Business Insider shows that Google searches for Pokemon Go began petering out in August of 2016.  Now my one contention with this chart is my guesss is that Pokemon Go fans stopped searching for the generic "Pokemon Go" and began searching for things like How do I beat this Pokemon or Tips for Pokemon Go.  A general search for something tend to be higher as it begins but the searches refine to more niche based searches as time goes on.  None the less the chart does show that July surge accurately. 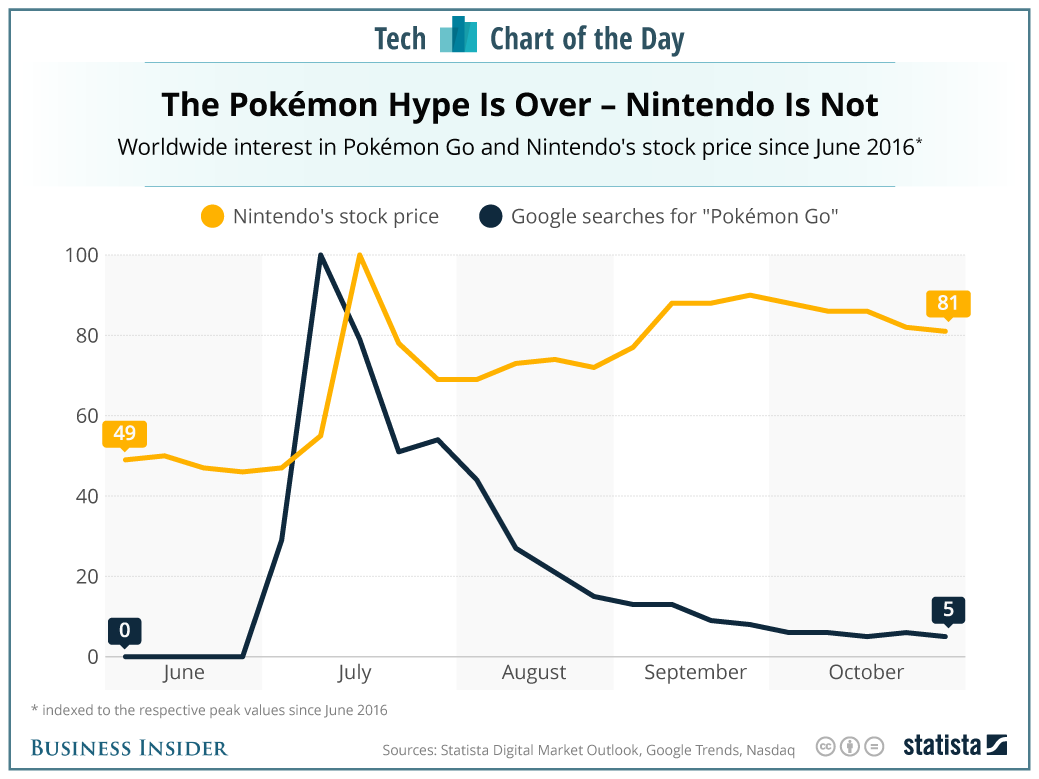 Either way you shake it though the Business Insider graph shows a pretty dismal view of longevity but here we are two years later discussing it.

At Toylab for 2017 through 2018 we have seen is that Pokemon Go searches have held at a lower but also steady level.  Generally, Toylab garners around 100 - 300 views a day on Pokemon Go related topics.  This is even without new Pokemon Go content coming out regularly.  Recently though we have noticed another surge in interest.

This surge is being noticed by others as well.  VentureBeat released data that came from a research firm called Superdata on Pokemon Go statistics.  The game in May 2018 made $104 Million an increase of 174% over May 2017.

A couple of things have occurred since May which would indicate that the App may be even bigger in June.  The game released Trading which is pretty hot.  Once again when I go to Pokemon Go locations there are crowds of trainers there.  There is also the simple fact that the game becomes more popular when the weather is warmer as its easier to walk around outside when your not trudging through snow.

Trading was definitely a big deal and the system they designed for it is impressive.

I also think that the upcoming Lets Go Pikachu Game could lead to yet an even bigger and perhaps larger spike.

Wait did I just find a semi sneaky way of plugging two of my older posts?  Of course I did ;)

How long will this game last? That is a really good question.

Its hard to say.  Pokemon has an element of a sport or competitive event that can keep people interested for long periods of time.  The biggest weakness I see is that primary goal of Pokemon is to catch Pokemon so the developer must continually release new Pokemon variants to keep interest up.

Pokemon Trainer Gear
Do you need a Christmas or Birthday gift for a Pokemon fan?  We have some awesome Pokemon toys and merchandise for fans young and old.  Pokemon fans love to have something to show their friends and it helps show that you care enough to know what they are into.  If you need a gift right now you can also find Pokemon products and toys at Walmart, Target, Walgreens, CVS, and Toys R Us.
Toylab is a member of the Amazon affiliate program and is thrilled to be able to offer a wide arrange of Pokemon shopping deals like these below: