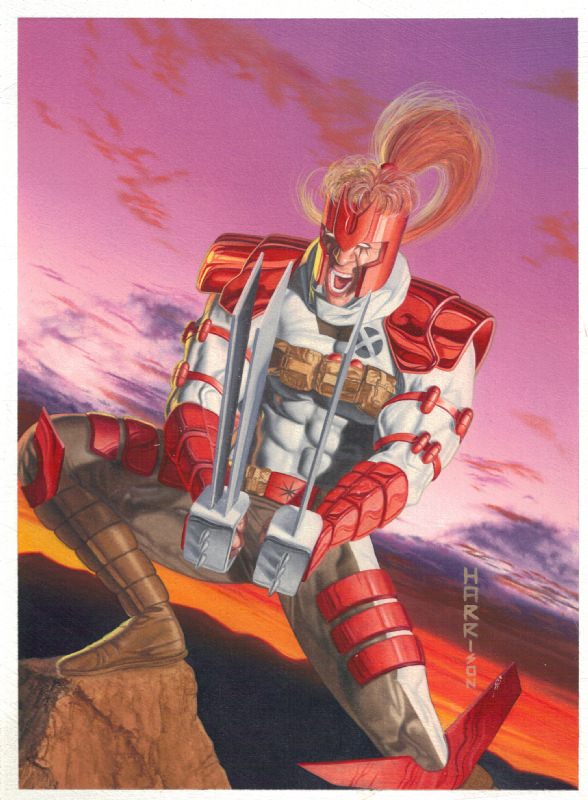 Who is Shatterstar? Marvel Comic Characters

Shatterstar is one of the founding members of X-Force.  He is set to make his first film appearance in Deadpool 2 where he will be played by actor Lewis Tan.

Quote:   "I...LIVE. AND FOR THE FIRST TIME IN A LONG WHILE.....I FEEL WHOLE. THANK YOU" (Shatterstar after being merged by Longshot into the body and soul of Benjamin Russell in X-Force #61) 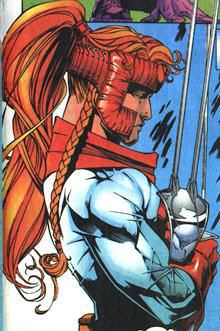 Shatterstar is an extra-dimensional gladiator who after arriving in the present day Earth joins forces with Cable's X-Force team.  Part of the agreement between Cable and Shatterstar is that X-Force will eventually go through time and help Shatterstar free his world from the control of Mojo.  He is well known as one of the original members of the team X-Force.

Shatterstar grew up in Mojoworld battling in brutal arenas of Mojo.  There he developed a strict sense of honor that he used to maintain his sanity and sense of purpose in the horrible conditions.  Eventually, he managed to join the rebel forces called the Cadre Alliance to oppose the rule of Mojo.  The leader of the Cadre a powerful scientist called Arize sent Shatterstar on a mission to recruit the X-Men to battle Mojo.  Shatterstar was sent through time and dimensions where he met Cable (New Mutants #99 1991).  This is the same time period where Cable begins to reorganize the New Mutants into the group known as X-Force.  While initially Shatterstar battles Domino and Cable they later become freinds and he joins the new team that Cable is creating.

Shatterstar with X-Force battles the Alliance of Evil, encounters the New Warriors, battles Proteus, defeats the Mutant Liberation Font and Repear.  Along with Spider-Man he battled Tom Cassidy and the Juggernaut.  In another battle he fought Toad's Brotherhood of Evil Mutants.

Shatterstar initially told Cable and everyone else that he had no parents and was born from artificial means.  However as time went on this was proven not to be the case (See Origin section below).

Shatterstar while initially confused by romantic relationships eventaully forms a relationship with Rictor. 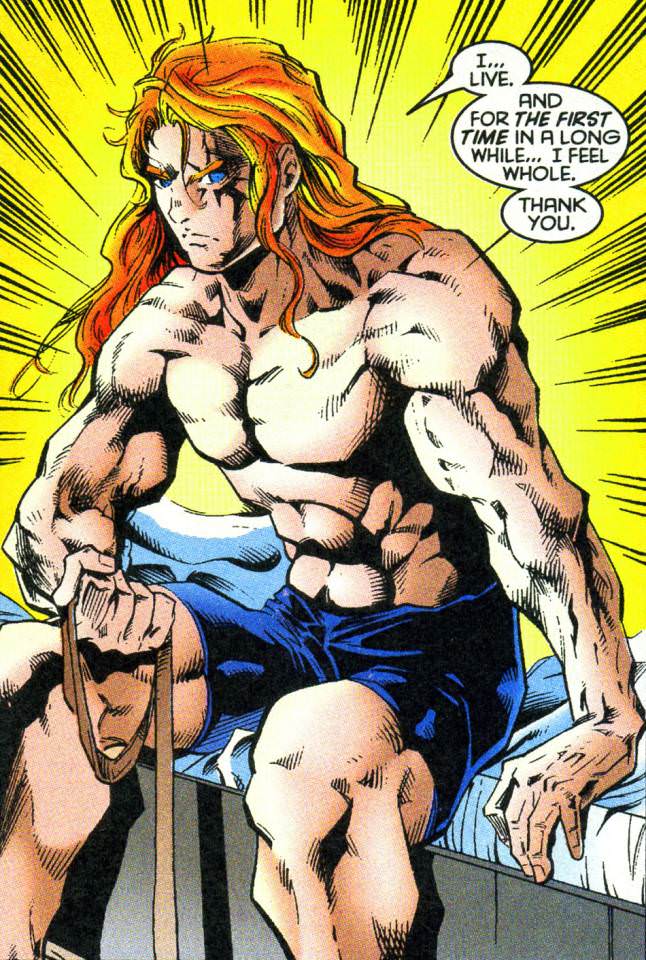 Shatterstar's origin is something of a mystery as his story goes in a lot of different directions and involves time travel and different dimensions.  Shatterstar is from the planet called Mojoworld which is different than the Mojoverse.  While both Mojoworld and Mojoverse are planets controlled by the media obsessed tyrant of Mojo, the Mojoverse is a parallel dimension of present day Earth, while Mojoworld exists about a 100 years in the future.  Shatterstar's eventual travel to Earth made him both a time traveler and a dimension hopper.

Shatterstar initially says he was a genetically engineered warrior/gladiator and was born from a gestation chamber.  However, after a duration on Earth, Shatterstar discovers he has memories that come from a comatose Earth mutant named Benjammin Russell (X-Force #61).  Bizarrely Benjammin Russell  shares his appearance.  Shatterstar and Longshot are able to effectively merge the soul of the pair making them one person.  This story seems to suggest that Shatterstar came from Earth and that Benjammin Russell then came became Shatterstar after traveling to the Mojoworld.

To make his origin a little more complicated is the relationship with Dazzler and Longshot.  Dazzler becomes pregnant with Longshot's child.  Longshot suggests that the child once born should be named Shatterstar.  Dazzler and Longshot then leave for a mission on Mojoworld to free Longshot's people from Mojo.  Dazzler returns to Earth, however neither Longshot nor a child are with her and she seems to have no memory of either.  For a time it was speculated that the child was miscarried. However, in X-Force #45 (1995) Beast begins to note similarities between the physiology of Longshot and Shatterstar notably that the two share hollow bones and no white blood cells.  Shatterstar had avoided the normal X-Men physical exams because in his mind they were a sign of weakness however after breaking ribs in Cable #22 (2nd series) Beast finally had a reason to examine Shatterstar.  The results of these exams led Beast to speculate that Longshot and Shatterstar may have a familial relationship (X-Force #51 1996) however Shatterstar with the help of Cable evades most of Beast's questions.

The link between Longshot and Shatterstar is also hinted at by the villain Cortex who finds that his powers do not work well on either.  Cortex speculates that it could be due to both of their extra-dimensional origins and also possibly due to a familial connection between the two men (X-Factor #47).

Never answered questions are how Benjamin Russell fits into the origin or how the genetic material that is in Shatterstar and Longshot was in fact originally created as their current existence appears to be a circular reference error.  The answer to these questions seems likely to be linked.  The character of Spiral is also tied into the origin as Spiral is the one that reveals to Shatterstar that Benjamin Russell exists.  Spiral also tells Cable at one point that Benjamin Russell and Shatterstar "meant more than life itself to her".  This was never fully explained.  At one point Spiral returns and sends Shatterstar to a dimension fully conquered by Spiral however how Spiral connects to Shatterstar's past is not explained further.

Shatterstar and Rictor and Controversy
Shatterstar was designed by Rob Liefeld to be A-Sexual however he was later changed to be a Homosexual by writer Peter David.  Rob said he desired to retcon Shatterstar back to being A-Sexual as that was how he was always intended to be A-Sexual.

Superhuman with bizarre physiology unique to himself and Longshot.  Both lack white blood cells and have hollowbones.  Both are also able to resist the villain Cortex's attempts at mind control.
Shatterstar shows a wide range of Super/Enhance physical attributes though not to the level of the Hulk.  He is shown to be toss the Thing and also be fast enough to dodge point blank automatic bullets.

Shatterstar has enhanced Cognition or ability to think through problems.  He can also master new technology and languages with ease.

Shatterstar can create vibratory shockwaves that create teleportation portals with his swords.

Shatterstar is highly trained in combat, being raised as a gladiator in brutal conditions. 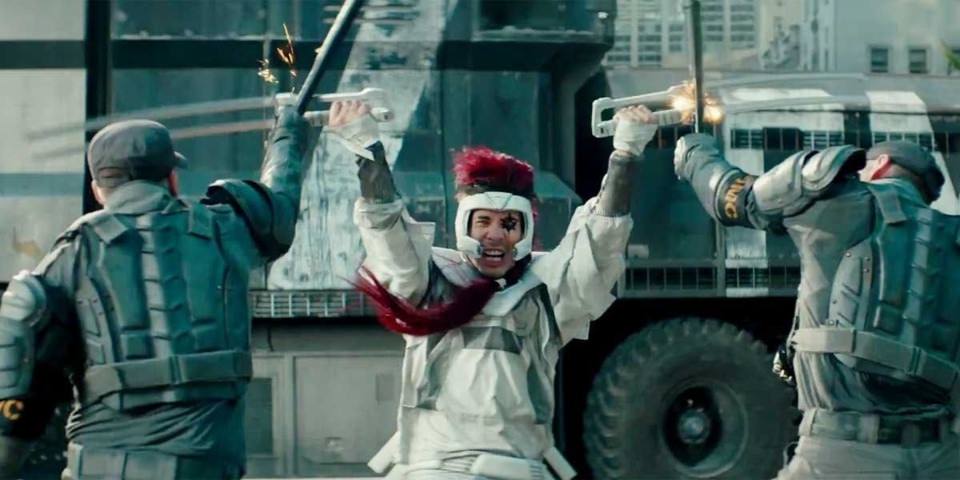 Shatterstar will make his first appearance in film in Deadpool 2.  Shatterstar is played by martial arts actor Lewis Tan.  Lewis Tan played the character Zhou Cheng in the Netflix MCU show Iron Fist.  No appearances are currently planned for Shatterstar in the MCU though with the Fox/Disney deal now complete it will soon be possible.