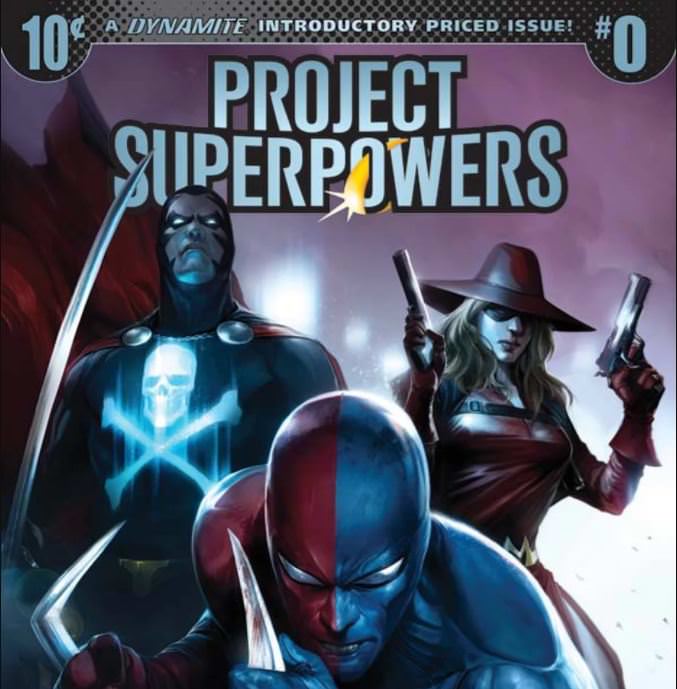 Dynamite released a press release for their upcoming flagship book of Project Super Powers.  The book brings together some of the main properties of the Dynamite Universe in an Avengers/Justice League like format the characters includes ones like Masquerade, Black Terror and Scarab.  In addition to the top tier characters Dynamite has pursued top talent to bring the series together.

Writer Rob Williams is taking on Dynamites major project this year in Project Superpowers. Williams is well known for his run on Suicide Squad.
One of the things that caught my eye in the release was the art. Dynamite has brought in some big guns for this book.  From the press release below you will note:

Project Superpowers #0 has a cover by superstar artist Francesco Mattina (Dark Nights: Metal) that will also be available as an ultra-limited-edition virgin cover. Plus, there are five sneak peek variant covers to choose from by John Royle, Philip Tan, Sergio Davila, Ed Benes and J.G. Jones.

Another great thing about this book is that is launching with the low price of 10 cents making it an easy gamble for all new readers.  The book is scheduled to hit shelves in July, 2018. 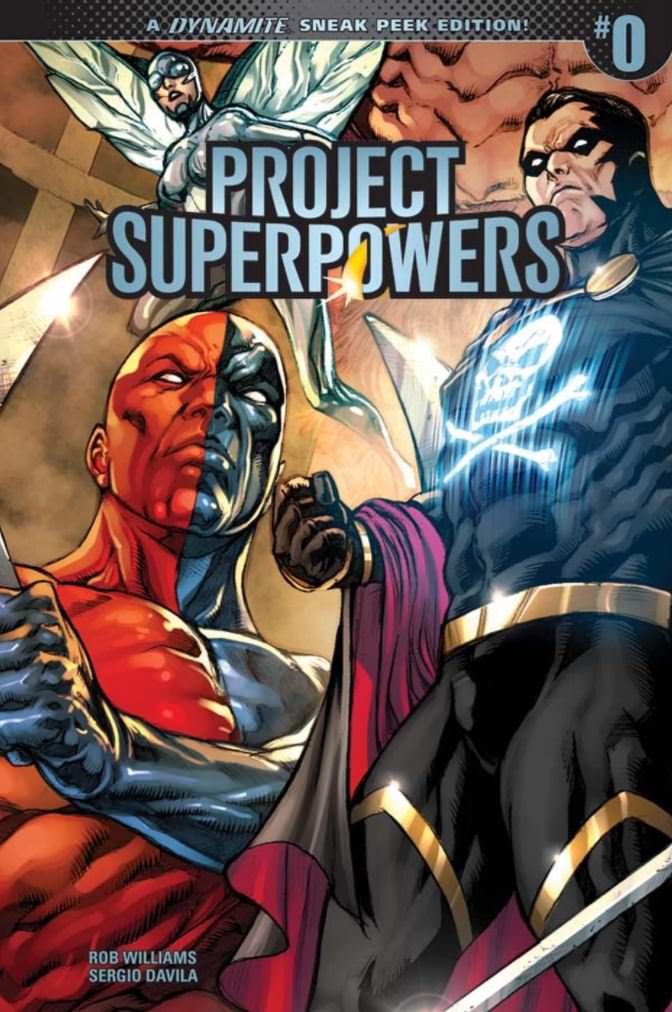 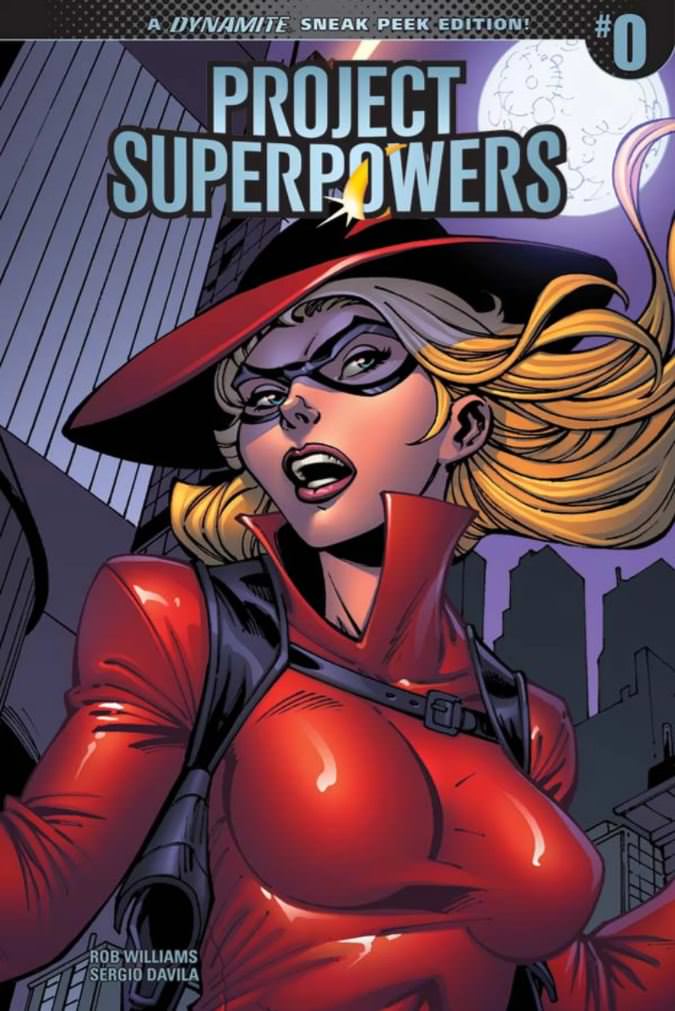 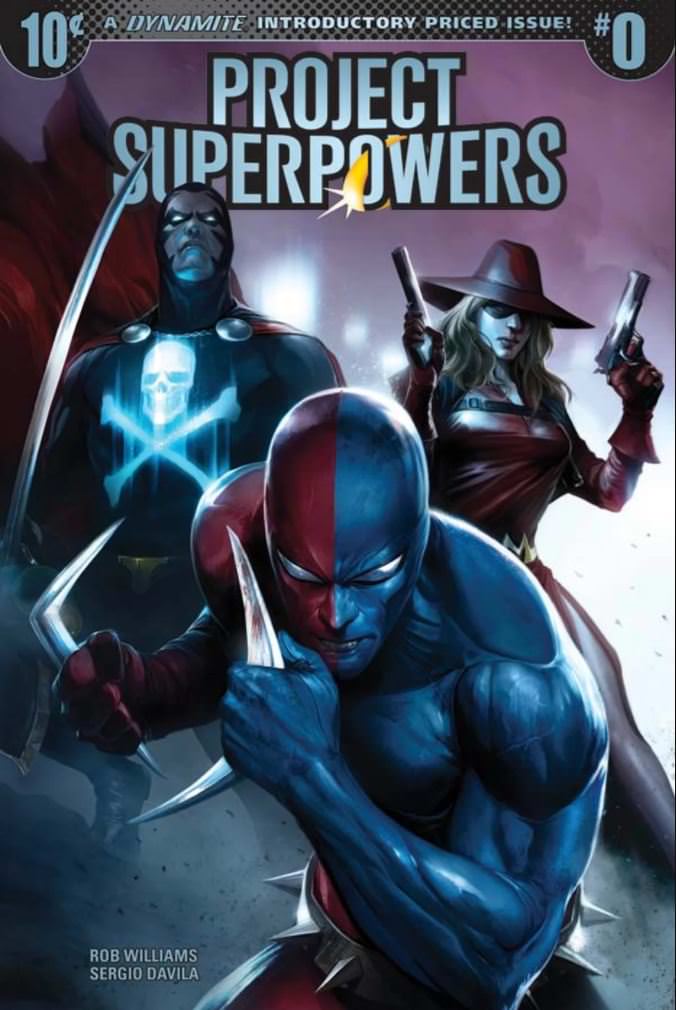 Dynamite Entertainment is proud to announce their biggest launch of the year, Project Superpowers #0 at the special introductory price of just $0.10 cents! That super low price is in celebration of the 10th anniversary of the titles original debut in 2008. Heading up the new series is the fan-favorite creative team of writer Rob Williams (Suicide Squad, Harley Quinn) and artist Sergio Davila (Injustice, Superman). This special #0 issue hits comic shops this July, is the perfect lead in for new readers and will feature an all-star line-up of cover artists.

An all new threat faces the Earth, while the team faces turmoil from within and must overcome all obstacles to prove their worth and value in a world that desperately needs its heroes. The Black Terror, The Death-Defying ‘Devil, Sampson, Masquerade, Green Lama, Scarab and more are all here as the adventure begins again.

“In our new #0 you’ll see we’re introducing the new world via The Devil (Death Defying) and Green Lama,” writer Rob Williams tells us about the special issue. “We’ll flash back to introduce new readers to the team’s World War 2 origins and how they were brought to the present via imprisonment in Pandora’s box. And then it’s introducing a brand-new threat. One not so rooted in their history. The main players, which include The Black Terror, The Scarab, Masquerade, are going to have to form a new incarnation of the team. And The Spirit Of the American Flag is hovering, watching, judging… A new host is going to be taken.”
Williams got his start in 2002 as a publisher/creator with Com.X then worked with a variety of publisher including Dynamite, 2000A.D. and Marvel before landing with DC where he started his critically-acclaimed on-going run of Suicide Squad in October 2016 that continues on 38 issues later.

Davila began his professional career with Dynamite on the Lord of the Jungle series in 2012 and has provided work for Red Sonja, Vampirella and other of the publisher’s top series. He has recently started working with DC on Wonder Woman and Superman but jumped at the chance to draw Dynamite’s most powerful heroes.

“We’ve been planning the relaunch of Project Superpowers for the last year, and knew we wanted to create the most compelling comic possible! To do that, we were able to bring on board Rob Williams and Sergio Davilla, and it’s a great comic! To ensure the widest audience possible reads the series, we are offering the #0 issue at .10 cents for the 10th Anniversary of Project Superpowers!” States Dynamite CEO/Publisher Nick Barrucci. “I couldn’t be prouder of the creative team and comic, and can’t wait for fans to check it out! I know that they will love it!”

“I Am beyond thrilled to be working with Rob on this ambitious relaunch of our flagship superhero series. Rob’s become a friend and a force to be reckoned with in comics for sure, and applying his vision and skill to Project Superpowers is going to make it THE superhero event of 2018.” States Dynamite Executive Editor Joseph Rybandt.
Project Superpowers #0 has a cover by superstar artist Francesco Mattina (Dark Nights: Metal) that will also be available as an ultra-limited-edition virgin cover. Plus, there are five sneak peek variant covers to choose from by John Royle, Philip Tan, Sergio Davila, Ed Benes and J.G. Jones. And don’t miss out on the Project Superpowers Omnibus Vol. 1: Dawn of Heroes collecting three full graphic novels and the never before collecting Project Superpowers #1/2 issue. This new collection coincides with the release of the new Project Superpowers #1 in August.

Project Superpowers #0 will be solicited in the May issue of Diamond Previews catalog, the comic industry's premier source of merchandise for the comic book specialty market, and scheduled to ship in July of 2018. Readers are encouraged to order through their local comic retailers or through digital platforms courtesy of Comixology, Kindle, iBooks, Google Play, Dynamite Digital, iVerse, Madefire, and Dark Horse Digital. Fans are encouraged to follow Dynamite Entertainment's social media channels for the latest updates on Project Superpowerscomic books and graphic novels.
on April 06, 2018