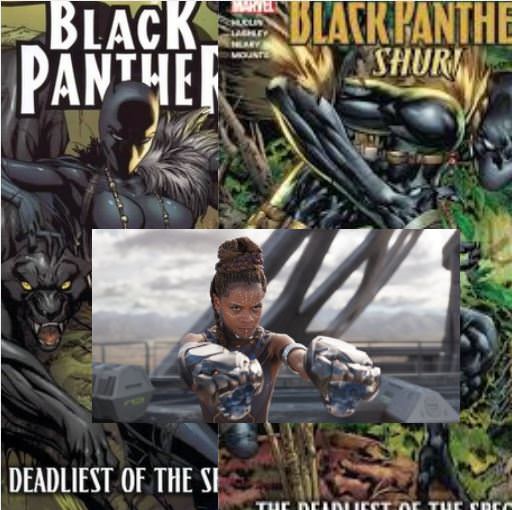 Marvel putting out a Shuri collection

The immense popularity of the Black Panther film is both increasing his popularity and also causing attention to his supporting caste.   The film did a great job and showcasing a lot of Wakanda and giving many of its characters time to develop on screen.

One of the characters that stood out was Shuri who had a cute sprite personality that meshed brilliant with her fierce intellect and warrior abilities to be a very unique character.   At has even been pointed out by some that Shuri is in fact a Disney Princess.  Which would allow the company to use her brand alongside Belle and Mulan.  With this new attention on the character Marvel is rushing to put to print a collection of Shuri comics.

Some people think that Shuri was created for the film or has always been in the background of comics.  This is actually not true.  Shuri had a significant arc under Black Panther scribe Reginald Hudlin who had her fill the shoes of T'Challa as Black Panther.  The series is pretty solid as well and has Shuri facing off against Morlun the eater of totems (A great villain).  Some people think of Morlun as purely a Spider-Man villain but he has faced the Black Panther on numerous occasions.  The popular X-Men Storm aka Queen Ororo also features heavily in this story as she was married to T'Challa during this period.  I liked this arc however I will say that the comic Shuri had a different personality as the character on film.  So just take that as a bit of a warning.  My guess is that in future Black Panther comics they may tweak the character to be a bit more like her movie counterpart.

The new collection pulls together Black Panther 1-6 of the Shuri arc and will be a total of 144 pages. 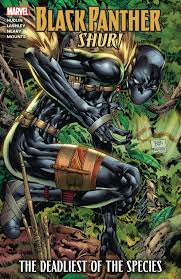 BLACK PANTHER: SHURI - THE DEADLIEST OF THE SPECIES (NEW PRINTING)
WRITTEN BY REGINALD HUDLIN
PENCILED BY KEN LASHLEY
COVER BY J. SCOTT CAMPBELL
Who is the Black Panther? Under the protection of the Black Panther, the African nation of Wakanda has thrived. But after attending a secretive, mysterious meeting, T’Challa — the current Black Panther and ruler of Wakanda — returns home with severe injuries and locked in a comatose state. Though Wakanda is a powerful nation capable of defending itself, its power comes directly from its leader, the Black Panther — and in the event that T’Challa doesn’t emerge from his coma, a successor must be chosen. For Shuri, younger sister of T’Challa, the time has finally come to take up the mantle. But as she embarks on the dangerous ritual to become the new Black Panther, the stakes have never been higher. An unstoppable force is headed toward Wakanda: Morlun is back, and he’s hungry!