Simonson to do cover for Thor #706

This June 13th, Jane Foster's version of Thor known as the mighty Thor is going to die soon. Jane has been dying from cancer ever since she took on the mantle / name of Thor 3 years ago. While Jane took over his name Thor has been using the name Odinson or Unworthy Thor.

The story that will lead Odinson back into the role of Thor is going on now.
Jane's version is set to die as Thor during Mighty Thor #706 on April 18th. Walter Simonson the legendary writer /artist of Thor during the 80s is returning to do a cover for the book.   This will Simonson's first time drawing the iconic Thor villain Mangog.  Series editor Wil Moss pointed this fact out saying, “This is actually his first time drawing Jane Thor and the Mangog, a classic Thor villain from the Jack Kirby and Stan Lee era that he never go the chance to draw before.”


The Mighty Thor #706 coming out April 18th.
VARIANT COVER BY WALTER SIMONSON
YOUNG GUNS VARIANT COVER BY MARCO CHECCHETTO
VENOM 30TH VARIANT COVER BY TBA
AT THE GATES OF VALHALLA!
THE DEATH OF THE MIGHTY THOR finale
• The battle against the Mangog is finished. And the losses have been profound.
• So what – if anything – remains of the story of Jane Foster, Goddess of Thunder?• And where do the other gods possibly go from here? 32 PGS./Rated T+ …$3.99

Thor Odinson will then go back to the name of Thor in a relaunched series launching in June as Thor #1.

Thor will get a Hammer back however it is not expected to be Mjolnir. He will also still have his prosthetic arm but it will change from dark colored arm to a gold one. While Thor may not get his own Hammer or arm back he is expected to get his name back so he can stop going by Odinson.The plot line of Thor losing his hammer and his mantle was started about 3 years ago.
Thor 1 release date: June 13, 2018 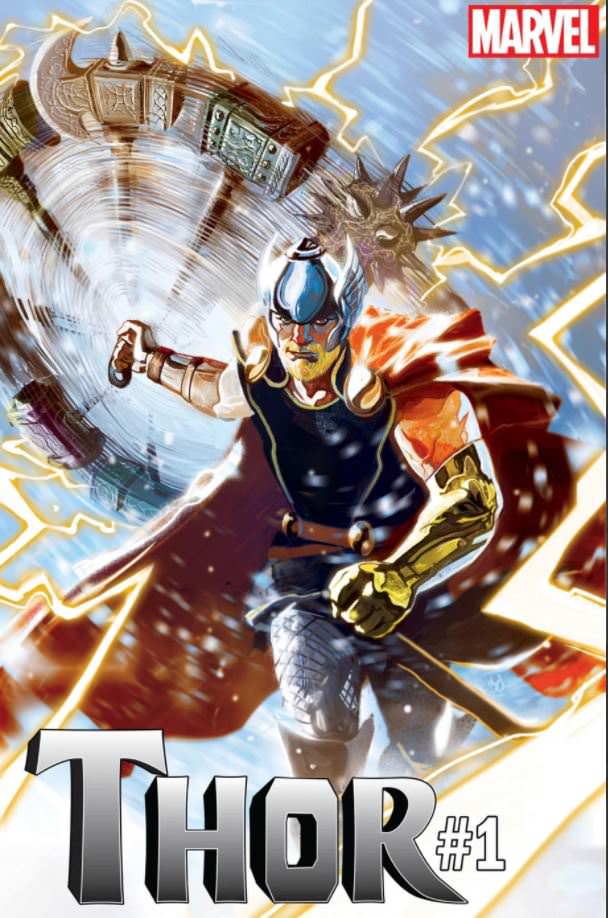 This June, the Odinson regains his mantle.

THOR #1, written by Jason Aaron with art by Mike Del Mundo, sees the start of a new mission for the God of Thunder. The artifacts of Asgard have been scattered across the Earth, and to reclaim them, Thor will have to face some ugly truths…Like the production cost of hundreds of new hammers! And he’ll need every last one of them if he’s going to stop the unstoppable when none other than the Juggernaut joins the fray.
Emerging from his landmark run on MIGHTY THOR, Jason Aaron is ready for this fresh take: “On the one hand, I still feel like I’m writing the same Thor story that began six years ago in the pages of THOR GOD OF THUNDER #1. But at the same time, GOD OF THUNDER had a very different look and feel and focus than Jane Foster’s story,” he explains. “And even though Thor Odinson is now reclaiming his mantle, this new volume will also be going in a very different direction. Thor has a completely new status-quo. Actually the entire landscape of his corner of the Marvel Universe has been changed in the wake of the ‘Death of the Mighty Thor’ arc in MIGHTY THOR. But there’s still a War of the Realms raging, and Thor isn’t looking to stand on the sidelines.”

The writer continues, “The thing I’m most excited about though is getting to work with Mike Del Mundo again. I loved the beautiful craziness he brought to the page when we did WEIRDWORLD together, and things are even wilder and more beautiful here. There just aren’t many artists in comics today whose work I love and admire more than Mike’s, so I feel incredibly fortunate to be launching this new direction for Thor with Mike by my side.”
And Del Mundo is ready for the action as well: “I’m super excited about this new journey! Working with Jason on WEIRDWORLD was so much fun and badassery and I’m getting that same excitedness and feels with this new THOR series—with added thunder!”
Prepare for THOR #1, by Jason Aaron and Mike Del Mundo, on June 13!