The Slavers story being used for Punisher 2? 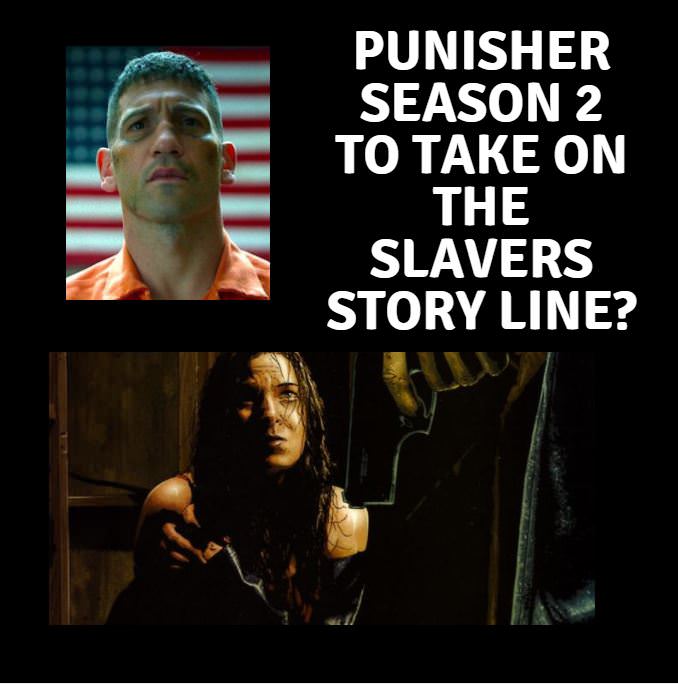 The Punisher is a comic character that makes people uncomfortable.  Is it ok to turn a guy who is basically a serial killer into a hero?   Does his story also attack the justice system and political organizations that should be pursing justice?  Is there a part of the character that borders upon snuff film glorification of violence?  These are tough questions to be asking about a comic book character that kids read.

The way Frank's methods are justified in the comics are pretty simple, they put him up against the very worst of humanity.  When these vile people come across Frank you know that they will finally get their PUNISHMENT.  Normally, I can't help but cheer as these horrible people go down in horrific ways.  Horrific ways that they very much have worked hard to earn.  What is the dark part of me that is cheering for people to get violently slaughtered?  Its dark stuff, and if it doesn't make you uncomfortable at all than you likely are missing some of the points of the character to begin with.

The value of that the Punisher has over perhaps every other character in comics is that his writers have been free to explore issues that are considered too dark or taboo for other stories to get into.  One of those themes was modern day slavery.

At the height of the slavery in the US there were estimated to be around 10 million slaves.  Today world estimates say there are over 30 million people living as slaves.  3 TIMES AS MANY.  So not only is this a problem of today's world, it is a massive problem and one that gets little attention.  Why don't we hear more about this problem?  Well people who own slaves do a good job at hiding them, that is one reason, and another is that people really don't want to know about the slaves that were involved in mining the minerals that went into their smart phone.  It makes people uncomfortable, just like..........The Punisher.

What are we doing to stop this?  As far as I can tell almost nothing.   Where is our John Brown leading the charge to stop this?  People love to judge those in the past.  However, maybe we should take a moment to ask how future generations will judge us?

The Punisher does not give too flippity F#$#s about your or my discomfort on this topic.  He is out to bring justice to the most vile and of course at some point he turns his eyes toward modern day slavery.  It looks like Neflix Punisher series is going to pursue the story The Slavers themes as part of Punisher Season 2.  I don't want to be a cheerleader for this story, this is not something that you want to cheer about.  However, if they really do go forward with this story, good for them.


Why do I think Slaves is part of Season 2?
The Hashtag show managed to get their hands on some Punisher Season 2 casting calls among the new characters were the following descriptions:


Marvel TV is looking to cast two female roles, ANNIE BEIR and KIM DAVIS. For the role of ANNIE, they are looking for an 18-year old female to play a 16-year old on the show. She’s been described to us a someone who is used to the streets and is both scrappy and aware of her environment. For the role of KIM, they are looking for a female in her mid-30s, open ethnicity, to become a series regular working as a therapist.

The Hashtag show points out that these characters sound a lot like Viorica and Jen Cooke from the story Slavers written by Garth Ennis in 2005.  They explain their speculation further saying:


ANNIE BEIR, the street-smart scrapper, could be an analog to Viorica, the young girl whose life Castle saved and whose story led him to discover the sex slave ring run by Vera Konstantin and Cristu Bulat. In that story, Castle enlisted the help of a social worker, Jen Cooke, who had worked with Viorica, to learn about the slavers and take them down. In this case, KIM DAVIS could be the Jen Cooke of the story.

You can read the full article from the Hashtag show HERE.

I think the Hashtag is pretty spot on here.  Being that a Punisher season can cover multiple stories as different arcs I think Season 2 will involve Jigsaw, maybe Barricuda or the Russian and at least one other major story.  One of the top stories is Slaves and it would be by far the boldest material to take on for the show.

The Slavers Story:
The Slavers is considered to be one of the darker and perhaps the darkest of Punisher stories.  The premise is pretty simple.  Frank encounters a girl named Viorica who was a sex slave.   She tells him her story about being kidnapped, raped, enslaved, brutalized, how she had a child and how the baby was taken for leverage against her.  How eventually the baby was even killed.    Through he learns about a ring of slave traders, pimps and madames involved in the industry.  He then goes through them and their thugs like a ruthless buzz saw.  The story is by Garth Ennis and lasts through Punisher Max 25 through 30 (2005). 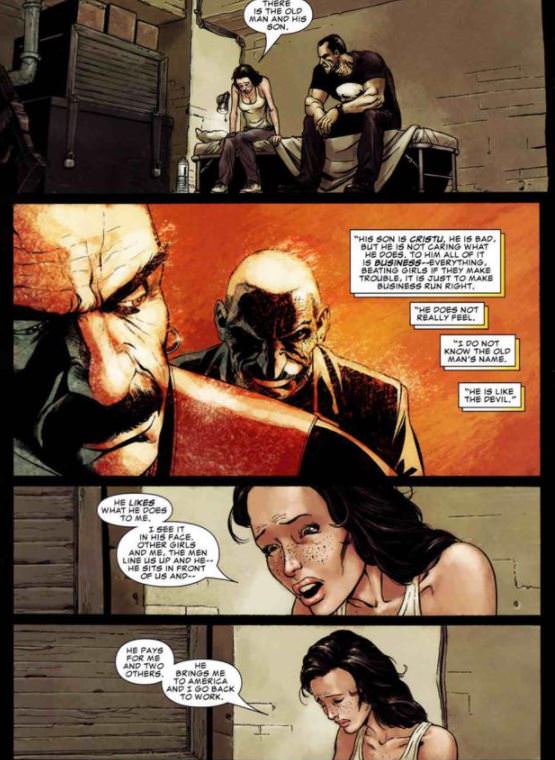 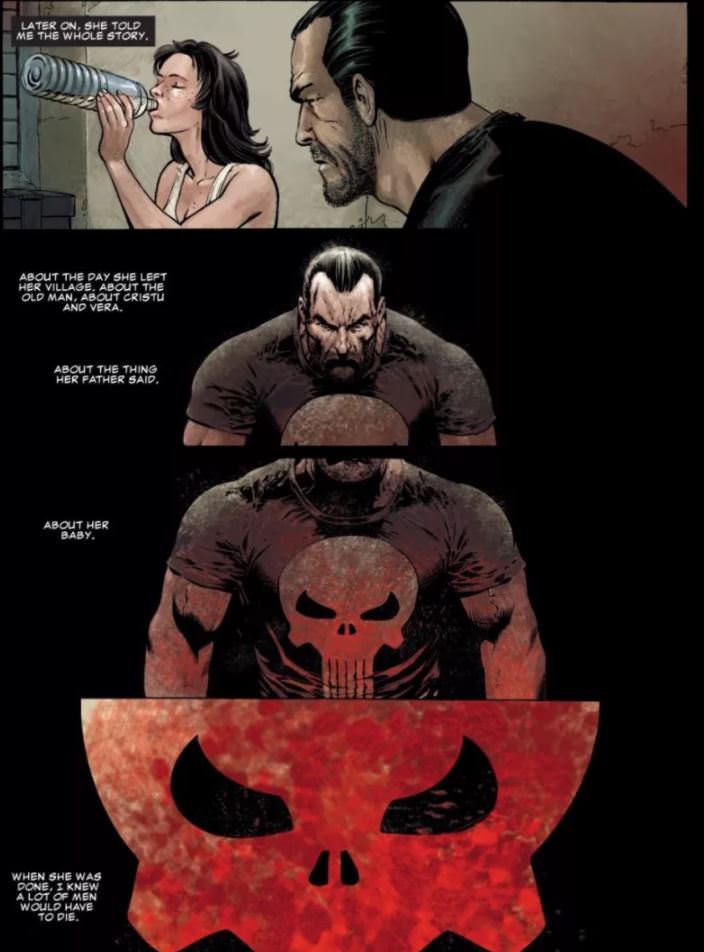 The story is brutal. In one confrontation Frank has the madame of the girls repeatedly thrown against a shatter proof window 20-30 times before the frame gives way from the wall and she topples out to the pavement below.  When she begs for mercy Frank calmly repeats the woman's own philosophy back to her, in one of the most haunting moments in comic history. 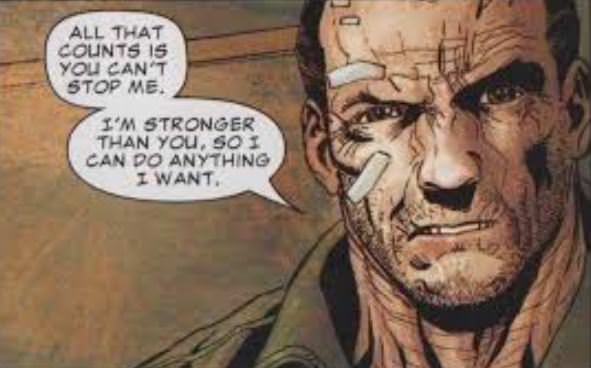 And as harsh as Frank is. You can't help but feel the people he chainsaws through deserve everything they get.

Part of me does not want this story to be in the Netflix show.  It was a hard story to read.  But the other part of me knows that of all the comic stories there are, this one above all others, SHOULD be the one that is told.