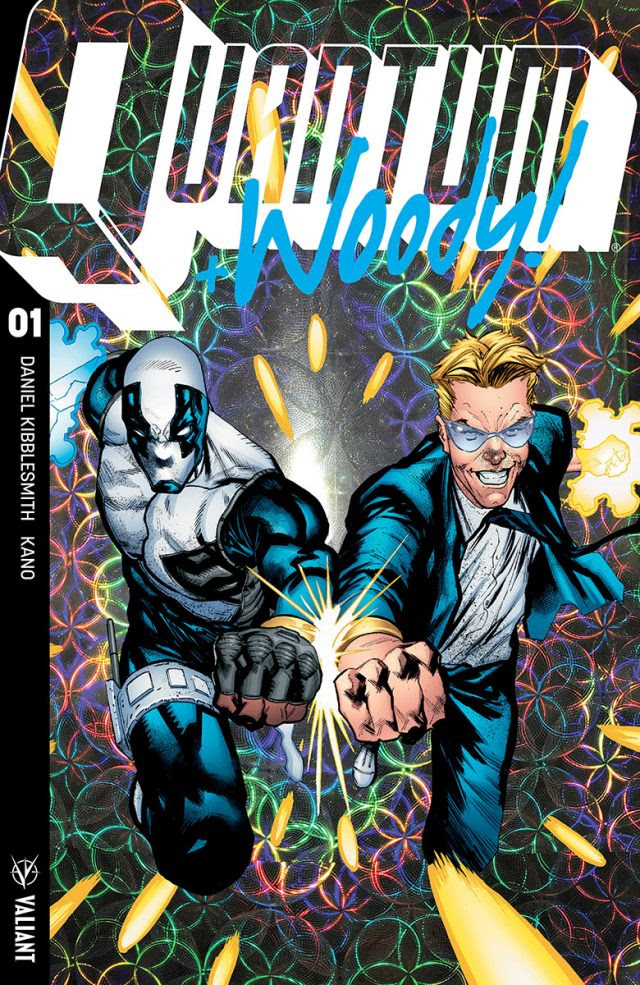 The 90s is alive in Valiant!

I thought I knew everything that was coming from Valiant in the most gimmik cover ever  BUT  I WAS SO VERY WRONG!!!!!

The best kind of nostalgia is when you find something from the past that you really felt was gone, then only to see it reappear much like it was.  Last week I found a pinball arcade in Louisville Colorado that had some of my favorite arcade games (Mortal Kombat 2, Galaga, DigDug) and mint condition Pinball machines that included some of my favorites Simpsons and Medieval Maddness.  Part of me was dumbstruck in awe as I saw these old games working and fully functional.  Stranger Things harnessed similar things to become a massive hit TV show and now Valiant is doing its own part to create a literal physical piece of the 90s on comic book shelves everywhere.

Yes some how Valiant managed to add a cool new quirk to this comic that I have a hard time believing.  What Valiant is doing with this comic is weaponizing 90s nostalgia into a foil Photon (Next Gen style of course) torpedo and firing it into happy 90s comic fans.  They are doing to this to such an amazing degree that the making of the comic itself is becoming an interesting story.

What I discovered in this Valiant Newsletter about the Quantom and Woody comic was something that really brought a huge smile to face.    The owner of Valiant Dinesh is a real comic book fan, he gets the industry because he himself is a consumer of that industry.  When he goes about creating the ultimate Variant cover he knows the covers he wants to emmulate and when he goes to a publisher to create this cover he really goes on a journey that only a comic book fan of 90s comics will really understand.

What Dinish finds in this place is really a gold mind of some of the great gimmick comics that lit up the comic store shelves of my youth.  What is even better is some of the left over foil from the 90's comics is going to be used to make the Quantom and Woody foil cover comics.  Dinish literally found left over foil used in 90s comics that has been sitting on a shelf for 25 years!!!  Its still there!

Make sure you watch the video below, its too awesome!

Preview from the Valiant Voice Newsletter:

Valiant is proud to reveal the pupil-scorching “EXTREME ULTRA-FOIL” shelf covers debuting on QUANTUM AND WOODY! (2017) #1-4 – the opening salvo of the ALL-NEW and UNPREDICTABLE ONGOING SERIES from rising star Daniel Kibblesmith (The Late Night With Stephen Colbert) and explosive artist Kano (Daredevil)! Beginning on December 20th, kick nostalgia in the nards as the world’s worst superhero team returns to comic shops everywhere with a dynamic, new(ish) cover treatment EMBOSSED and ENHANCED with AUTHENTIC COMICS FOIL FROM THE ‘90s (really!) and featuring artwork by superstar artist Geoff Shaw (God Country) across the series’ first 12 issues!

Now, for the first time, we’re also pulling back the curtain to reveal just how Valiant’s publishing team set about recovering and repurposing real, unused production materials from the height of ‘90s comic book excess! Last summer, Valiant sent a small group of employees to a specialized embossing and stamping factory outside of Montreal, Canada, where they discovered a treasure trove of unused comic foils once thought lost to history… Released from the archives for the first time in more than two decades, these rare foils will now find a new life on the first 12 issues of QUANTUM AND WOODY! (2017) as EXTREME ULTRA-FOIL shelf covers, as chronicled in this exclusive production featurette:

Available at the standard cover price with no minimum order qualifications for retailers, relive the face-melting radditude of the era that gloriously birthed Quantum and Woody into comics history with the best foil covers ever produced by a major comics publisher when Valiant’s EXTREME ULTRA-FOIL VARIANTS come stomping back into comic shops everywhere!

THEN: Don’t relax, we’re not through here yet… Fans and collectors can get their chase on with Valiant’s EXTREME ULTRA-FOIL CHASE VARIANT subset! Each month, in the tradition of comics’ most highly sought-after oddities and error editions, Valiant will produce a single, STRICTLY LIMITED-RUN VARIANT of Geoff Shaw’s EXTREME ULTRA-FOIL artwork with A RARE, SPECIALIZED andSUPREMELY WACKY ‘90s FOIL!

And of course, let’s not forget the piece de resistance! Valiant is doing something it can’t take back withQUANTUM AND WOODY! (2017) #1: THE MOST VARIANT COVER OF ALL TIME! This unholy and experimental combination of comic book history’s most noted, notorious, and obnoxious cover gimmicks will feature AT LEAST EIGHT SEPARATE PROCESSES – chromium, lenticular, embossing, die-cutting, iridescent ink, glow-in-the-dark and more – onto one highly limited, meticulously crafted variant cover featuring the artwork of acclaimed artist Clayton Henry (ARCHER & ARMSTRONG)!

All the milestones of comic book history have led to this! Stand back and take notice as QUANTUM AND WOODY (2017) #1 comes out swinging on December 20th – featuring covers by Julian Totino Tedesco (Hawkeye), Geoff Shaw (Thanos), Nick Pitarra (The Manhattan Projects), comics legend Neal Adams (Green Lantern/Green Arrow), and Clayton Henry (HARBINGER WARS) alongside every single gimmick known to man! 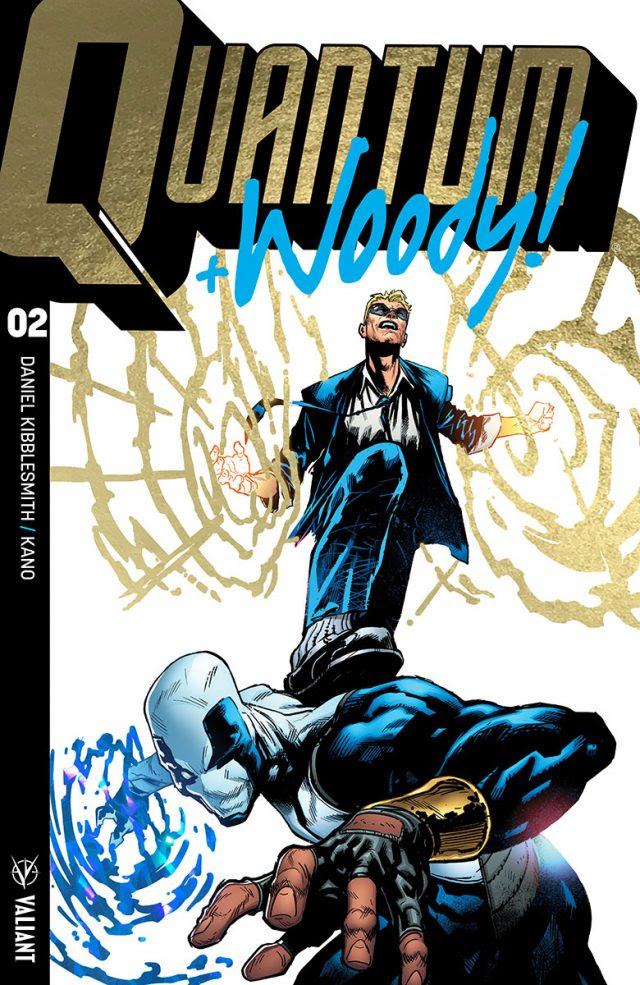 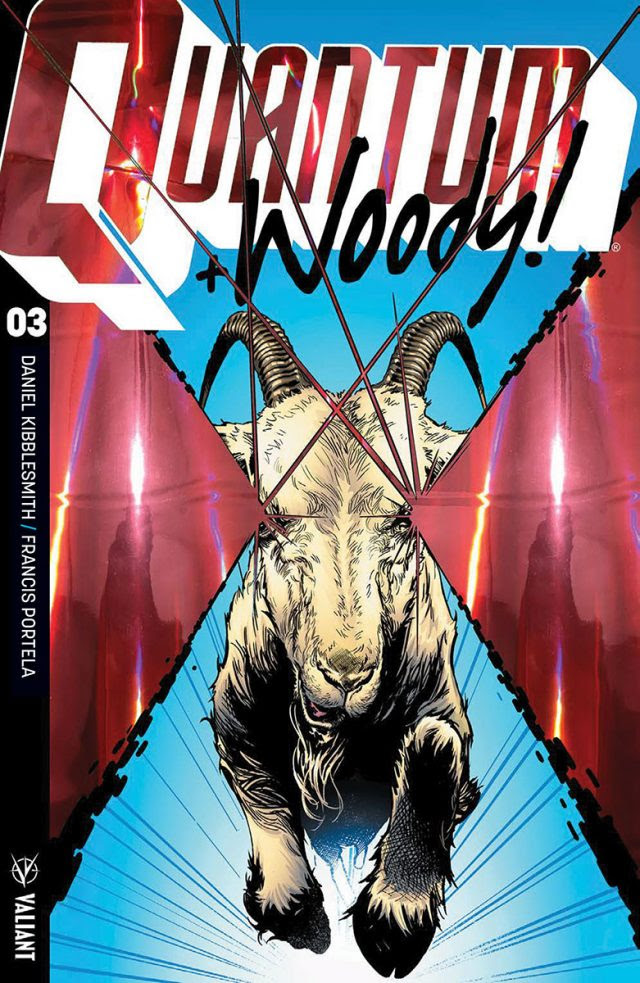