Easter Eggs in the Punisher series

The Punisher series in my opinion is the first series to rival the first Daredevil season in terms of quality.  The characters all have depth, no episode is wasted, and there is sense of watching something new and relevant.  This show does not shy away from its violent material but it also avoids taking it down the path of cartoonish violence.  People die in this show but almost always with meaning.  While the Punisher does not connect much in the MCU besides itself it does contain many winks and nods to Punisher comics.

Wan to know which events in the series were inspired by the comic stories?

Want to know how the characters compare to the comic counterparts?

Want to know how the Punisher connects to the MCU at large?

Spoiler Warning!
There are quite a few Spoilers in this post so if you have not seen the whole series go and do that first!

With that said lets begin our Punisher Easter Egg hunt!


Killed in a Bathroom Stall:

In the beginning of the series the Punisher walks in on a target as he goes to the restroom at an Airport.  This is actually how he kills the series baddie Rawlins in the comics.  In the comics, the Punisher tracks down Rawlins at an airport in Kabul.  He then corners him in the restroom and kills him there.
The death early in the series seems to play homage to this scene when Frank kills one of the last remaining men connected to  the death of his family.  The tone of the scene being some what humorous was very much in line with the dark humor used through the Garth Ennis run of the Punisher.


MCU Connections
There are not a lot of connections to the MCU at large in the series but a few characters from the Netflix Defenders series do cross over here.  Karen Woll and Turk Barrett both make appearances here.  Karen shows up a few times in the series and helps Frank information on Micro and his enemies.

The Gnuccis:
In the first episode of the Punisher, the dumb and dumber criminals that work with Frank on the construction site have an ingenuis idea of knocking off a high stakes poker game run by the Gnucci crime family.  This robbery fiasco has Frank coming to the rescue of one of his coworkers.  The Gnucci's are italian family of gangsters that seem to still be operating strong after the Punisher went through and killed some of their competition.  The Punisher took out a good chunk of the 3 gangs that were involved in his family's murder including the Kitchen Irish, The Cartels and the biker gang the Dogs of Hell.  The Gnucci's however don't seem to run afoul of the Punisher until the robbery of the Poker game.  Knowing that the Gnucci's will be hunting down who was behind the heist the Punisher ambushes those at the game and eliminates everyone there.

The Gnuccis are a big part of the comic story called "Welcome Back Frank" that the brought the Punisher back into comics after a hiatus.  The last line uttered in first episode was also "Welcome Back Frank."  This is a major Punisher story that is still loved by fans.   The main villain in the story is Ma Gnucci the ruthless leader of the Gnucci family who wants revenge on Castle.  Another villain who makes his appearance in the story is the ruthless mercenary the Russian which leads to one of the biggest throwdowns in Punisher history.

The Gnucci's were not added as a simple wink, those guys will be back and likely very angry at Castle for attacking them.

Rawlins.
Rawlins is almost exactly like his comic counterpart.  Both are douschy and corrupt CIA officers who try to use their connections to take down the Punisher.
The way Rawlin's loses an eye is also similar with him losing the eye in the comics and the TV series due to Frank
One difference between the comic version and TV version is that Punisher had a love interest in the comics that was Rawlin's ex wife.  Rawlin's had left her for dead in a mission and the woman scorned helped Frank take down her former beau.

Curtis:
Curtis does appear in the comics.  Curtis Hoyle first appears in the series The Punisher #1 by Mike Baron and Klaus Janson in 1987.   While the Curtis we meet in the show is a good guy his comic counterpart is not nearly so nice.


Pete Castilegone and The Sicilian Saga

In the beginning of the series Frank reveals he is using the alias of "Pete Castiglione". Castilglione is the Italian word for Castle and this name is used in a variety of comic stories related to the Punisher.

In the story"The Sicilian Saga." within Punisher War Journal by Mike Baron Frank is forced to lye low in Scilly after killing the son of corrupt politician Senator Stan Ori. While lying low there he comes into conflict with the local crime family the Besucchos.

The show references this story a couple of other times. Senator Stan Ori appears as a minor character in the series as a wink to this story. Frank also mentions that both his Grandma and Wife were Sicilian which is likely the reason he chose the Italianized version of his name as a cover.

The Punisher series is very stealthy about hiding one of Punisher's most famous villains in Billy Russo.  For a bulk of the series Billy seems like a good guy and friend of the Punisher and at times I even debated if this version was destined to become something different.  About midway through the series though it becomes clear good ol' Billy has a dark side and comic fans know that he is about to get a lot darker.

Billy Russo later known as "Jigsaw" is the Punisher's most infamous villain.  So infamous that we ranked him #1 in the list of Punisher's Top 10 villains.  Billy being handsome and being referred to in the comics as the Beaut are all consistent with his comic counterpart.  The Punisher decides in the comics that ruining Billy's face by throwing him face first threw a window is better Punishment for beautiful Billy than killing him.  This ruins Billy's face but he returns with his own forms of vengance.

I want to write more on this one but I feel that it just gives too much away.  Pretty much anything I write here is a spoiler.  However, I'd say they clearly set up some villains to use for Season 2 of the Punisher with both Jigsaw and the Gnuccis having reasons to go after Frank.


Valley Forge this is the final story that ended the run of the Punisher Max Line.  In this story Frank was forced to ask tough questions about his admiration for the military and also how the military could be used for ill.  In partciular when abused by corrupt politicians or government agents.

Rawlins is one of the major villains in the preceding stories of Man of Stone, Up is Down and Black is White, and Mother Russia.  Frank kills Rawlins before Valley Forge but a video of Rawlins confessing to setting up a dirty op using military personnel does appear in the story.

A lot of the Punisher Netflix series borrows events, villains and certainly themes from the Valley Forge story line.  In particular, when Castle was forced to break into the military base and showed concern about potentially killing America service men this had great similarities with his actions and thoughts in Valley Forge.


"Micro"
Micro is a major ally in the comics much in the same way he is in the series.  The Micro in the comics was older, fatter and far less cool than the one depicted in this series.  His origin also did not tie into the death of Frank's family.  The Micro in the comics was a computer hacking criminal who wanted to get revenge on the Kingpin Wilson Fisk after his nephew had been murdered for hacking into the Kingpin's servers.  Wanting to get revenge on Fisk, Micro offered his various skills to the Punisher who eagerly used them to take down the Kingpin and other criminals.

There is another character in Punisher comics called Roth that the TV series may have been inspired by.  In the story Up is Down and Black is White, Frank is aided by an ex CIA hacker named Roth along with another CIA Agent Kathryn O Brien to take down Rawlins.

In the comics the two have a bad falling out which ends with the death of Microchip. 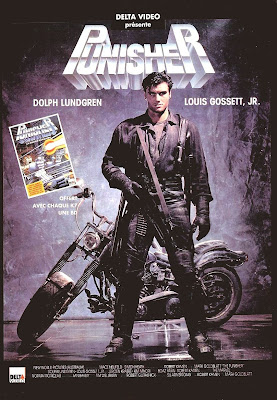 In the original Punisher film staring Dolph Lundren there was a planned scene for Dolph to spray paint a skull the Punisher symbol onto some tactical armor and use it in the film's climax.  This never happened and many fans have panned the movie for never letting him wear his iconic symbol.   Late in the Punisher season Frank spray paints the Skull on tactical armor and wears it.

It is hard to know whether this was intended to be inspired from the rumored scene in the original.  In my mind though that certainly helped correct a wrong of Comic Book Movies past.


These were the major easter eggs we caught in the series if you see anything else let us know at ToylabHQ@gmail.com or in the comments below.