Who is the Scorpion? Spider-Man Villain

Who is the Scorpion?

The Scorpion is one of Spider-Man oldest villains he was a super powered villain created specifically to take down Spider-Man.  A scorpion is a natural predator of a spider so its powers were imbued on Mac Gargan with the thought that it would allow him to easily defeat Spider-Man.  Scorpion has been depicted in many comics, cartoons and video games.  The character made his first cinematic appearance in Spider-Man: Homecoming (2017) and is played by actor Michael Mando.  Scorpion is thought to become one of the primary villains in sequel to Homecoming.


Scorpion Store:
Toylab is a member of the Amazon Affiliate Program allowing us to give you great deals. 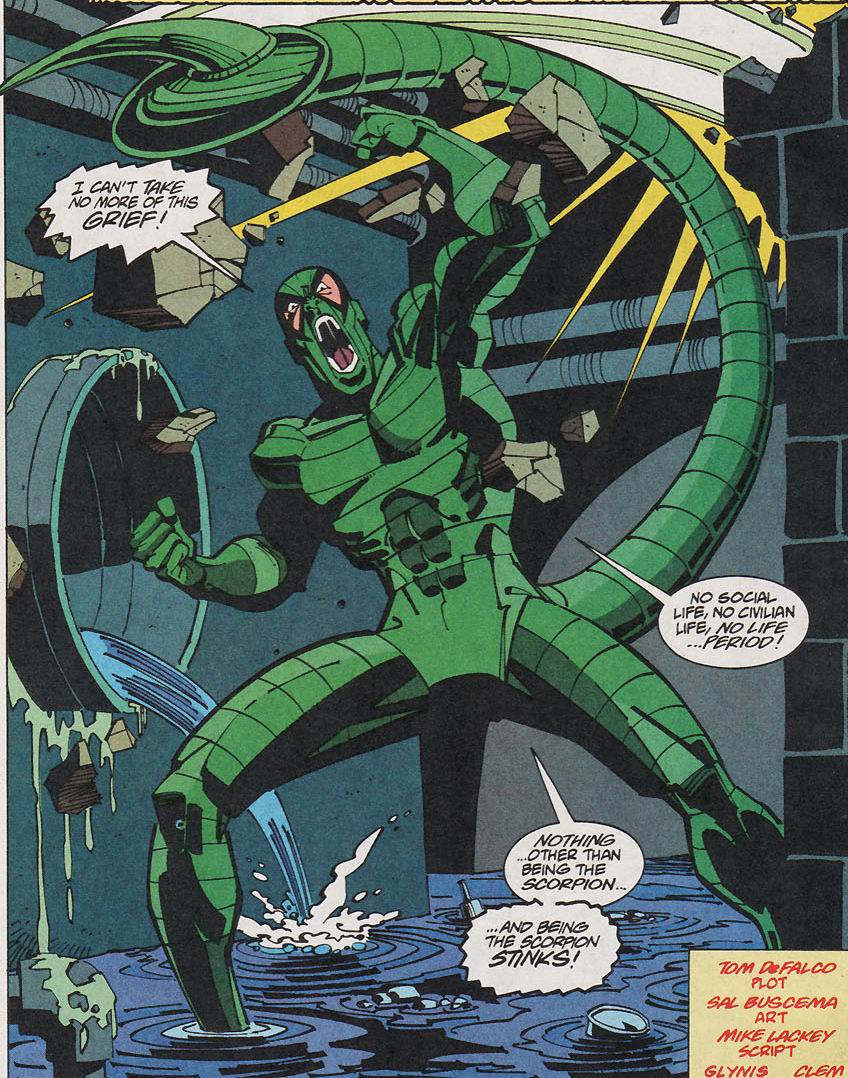 Mac Gargan is a private eye hired to follow Peter Parker by J. Jonah Jameson.  Jameson wants to know how Peter Parker is able to take the photographs of Spider-Man in action in the hopes he could exploit it to bring down Spider-Man.  Parker is not fooled by Gargan.  His spider-sense picks up on Gargan attempting to follow him and he easily gives the private eye the slip.  Jameson then convinces Gargan to be the test subject of an experimental process by Dr Farley Stillwell to endow a person with the attributes of an animal.  At Jameson's urging a scorpion is selected as the animal to base the testing on as a scorpion is a natural predator of the spider.  Gargan undergoes the procedure and is outfitted with a mechanical tail tha can fire projectiles.

In the first two meetings the Scorpion easily defeats Spider-Man but is unable to kill him.  The experiment begins to have mental side effects on Gargan and he begins to go fully insane.  The instincts of a Scorpion begin to overtake his human mind.  He becomes angry at Jameson and Dr Farley for making him into a monster and goes after him.  Spider-Man manages to defeat him in this third battle saving Jameson.  He becomes a career criminal with his constant sight on getting revenge on both Spider-Man and Jameson.  At one point he nearly kills Spider-Man by drowning him in cement but Spider-Man manages to escape.  He continue to goes more insane after being repeatedly by Spider-Man also due to being exposed to an acid in the sewers.

After numerous botched attempts of attacking Spider-Man he his recruited by Egghead to join the Masters of Evil alongside Whilewind and Moonstone.  The team of villains is defeated by the Avengers.

The Scorpion kidnaps Marla Madison the bride of Jonah Jameson on his wedding day.  She is saved by Spider-Man.  Jonah is forced to admit his part in creating the Scropion when he is blackmailed by the Hobgoblin.

The Scorpion is hired as a mercenary by Justin Hammer but bungles his first mission by creating a hostage situation to lure Jameson to the location.  Hammer sends his own agents in Backlash and Rhino to beat Scorpion and take back the Hammer Tail Enhancement of the Scorpion.

The Scorpion gets his tail back soon thereafter being provided one by the Tinkerer.  He and variety of other super villains are repelled from Canada as they attempt to flee the Super Hero Registration act.  Spider-Man finds and brutally beats the Scropion in the sewers, even though the Scorpion at the time was trying to reform from his villainious ways.

Becoming Venom:
Gargan begins to work for Norman Osborn and Osborn reveals that Peter Parker is Spider-Man's secret identity.  When Osborn is imprisoned, Gargan immediatly kidnaps Aunt May and tells Spider-Man that if he wants to see his Aunt again he must free Norman.  Gargan then comes into contact with Venom symbiote that offers him new abilities and Gargan accepts.  This makes Gargan very powerful and he for a time is part of Norman's Sinister Twelve.  Even with his new powers he is still defeated by Spider-Man.  He enjoys the respect of being seen as an A-List villain.

Gargan joins the Thunderbolts and is outfitted with electrical implants that will go off to keep him in check.  While seen as a hero by the general public he struggles with keeping the brutal instincts of Venom in check.  In a battle Jack Flag he beats him down and tries to eat Flag.  The eletrical safe guards go off and stop him from cannabalizing the hero.  He loses control again in a battle with Steel Spider and Sepulchre.  During this battle he eats off Steel Spider's arm.  He increasinly grows more violent in a battle with Namor he rips off the winged feet of the Submariner only to have the Submariner rip out his tongue.  He then kills and eats a guard inside of Thunderbolts mountain and is only stopped by Swordsman stabbing him through the chest. 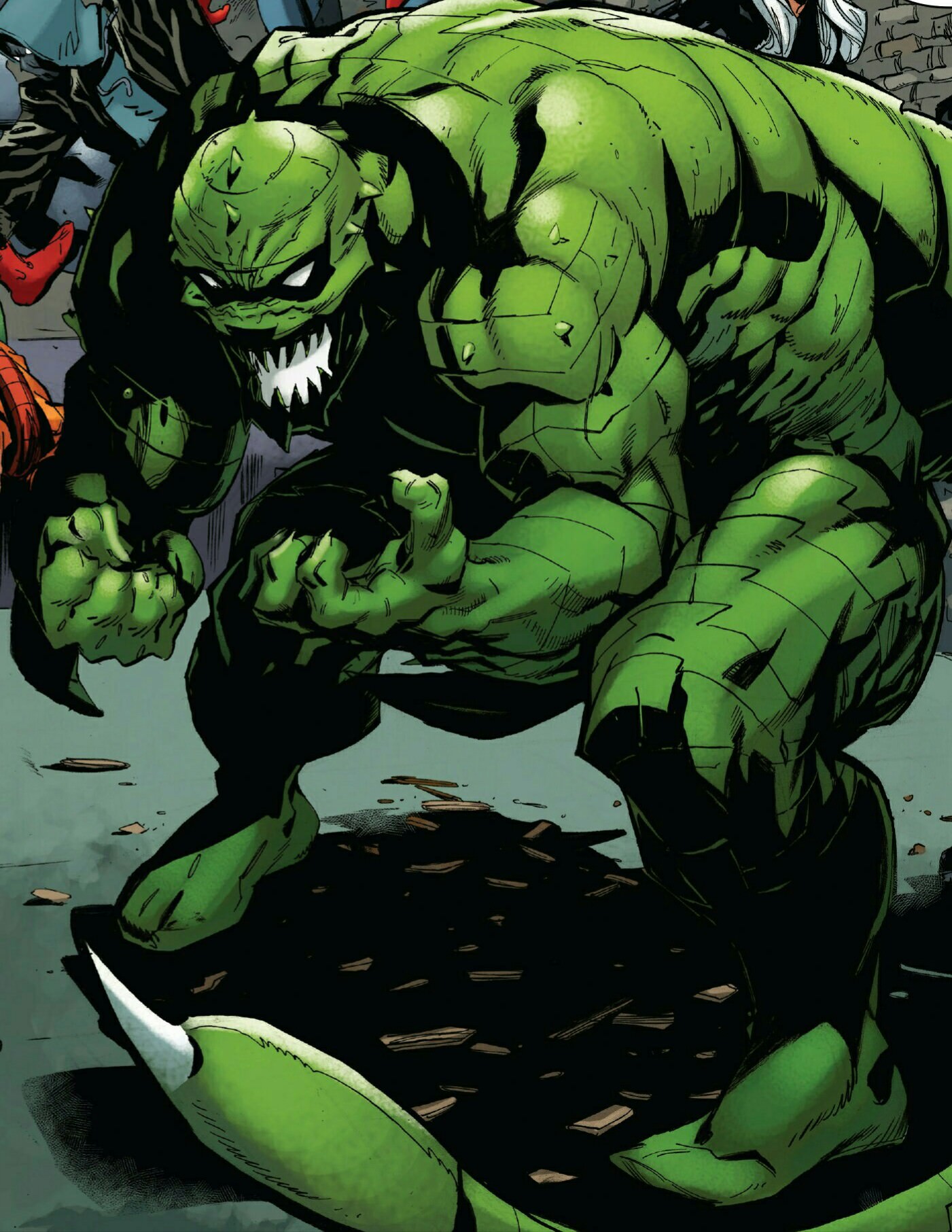 Gargan feels the presence of a former host of Venom and tracks down the person to FEAST soup kitchen where he hopes to find Spider-Man.  Instead, he finds Eddie Brock much to his dismay the symbiote immediatly leaves Gargan and tries to return to Eddie.  Eddie doesn't want the symbiote back and has a bizarre reaction.  A white symbiote sprouts from his skin  and he becomes Anti-Venom.  Anti-Venom is able to easily counter and defeat Venom.

Norman Osborn studies a sample of Anti-Venom and creates a special poison that will kill the suit.  He then creates a Scorpion Battlesuit that is enhanced by the Venom symbiote as a kind of "Ven-Orpion".  The Ven-Orpion manages to defeat Anti-Venom and destroys the Anti-Venom suit but the Venom Symbiote turns on Gargan and does not allow him to kill Eddie Brock which infuriates Gargan.

Gargan fights with the Thunderbolts against the Skrulls.  He is shown eating groups of Skrulls.  He also nearly eats Songbird before being stopped again by Swordsman.  Osborn gives a shot that changes the symbiote to its same size when it was used by Spider-Man.  Gargan then takes on the mantle of Spider-Man as he serves in the Dark Avengers.  Morgana La Fay turns Gargan into a giant demon that eat Ares on their first mission.  After gaining control of himself Gargan spits out Ares.  The magic of La Fay continues to cause Gargan to lose control of himself and random intervals.  Bullseye serving as Hawkeye is nearly eaten by possessed Gargan and promises that someday he will Gargan.

A group of villains who have limbs eaten by Dark Avengers Spider-Man (Gargan) form and begin to go after him about the same he tries to frame Jonah Jameson for a murder he commited.  He defeats the villains but fails to frame Jameson.

Back to Scorpion
While fighitng in Siege, Ms Marvel (Danvers) forcibly removes the symbiote from Gargan it then takes over Ms Marvel before Spider-Man is able to defeat it.  Osborn then falls from power and Gargan does not get the symbiote back.  He goes back to his Scorpion persona and is outfitted with a new suit by Alistair Smythe.  They attack and kidnap John Jameson the son of Jonah Jameson in an attempt to get revenge on Jonah.

Scorpion is hired as a guard for the Octopus facilities where he defeats the Titanium Man.  Scorpion threatens Aunt May when the mind of Otto Octavius has been moved into Peter Parker's body.  Both Octavius and Peter feel so strongly for May that they both emotionally swing at Scorpion breaking his jaw off his head.  His jaw is replaced with a metal cyborg jaw.  He rejoins with Smythe to go after Jonah and Spider-Man again but is defeated.

Scorpion becomes involved in a criminal deal between Lee Price and Black Cat.  Lee Price nearly kills Scorpion when altercation reveals that he is the new host for the Venom symbiote. 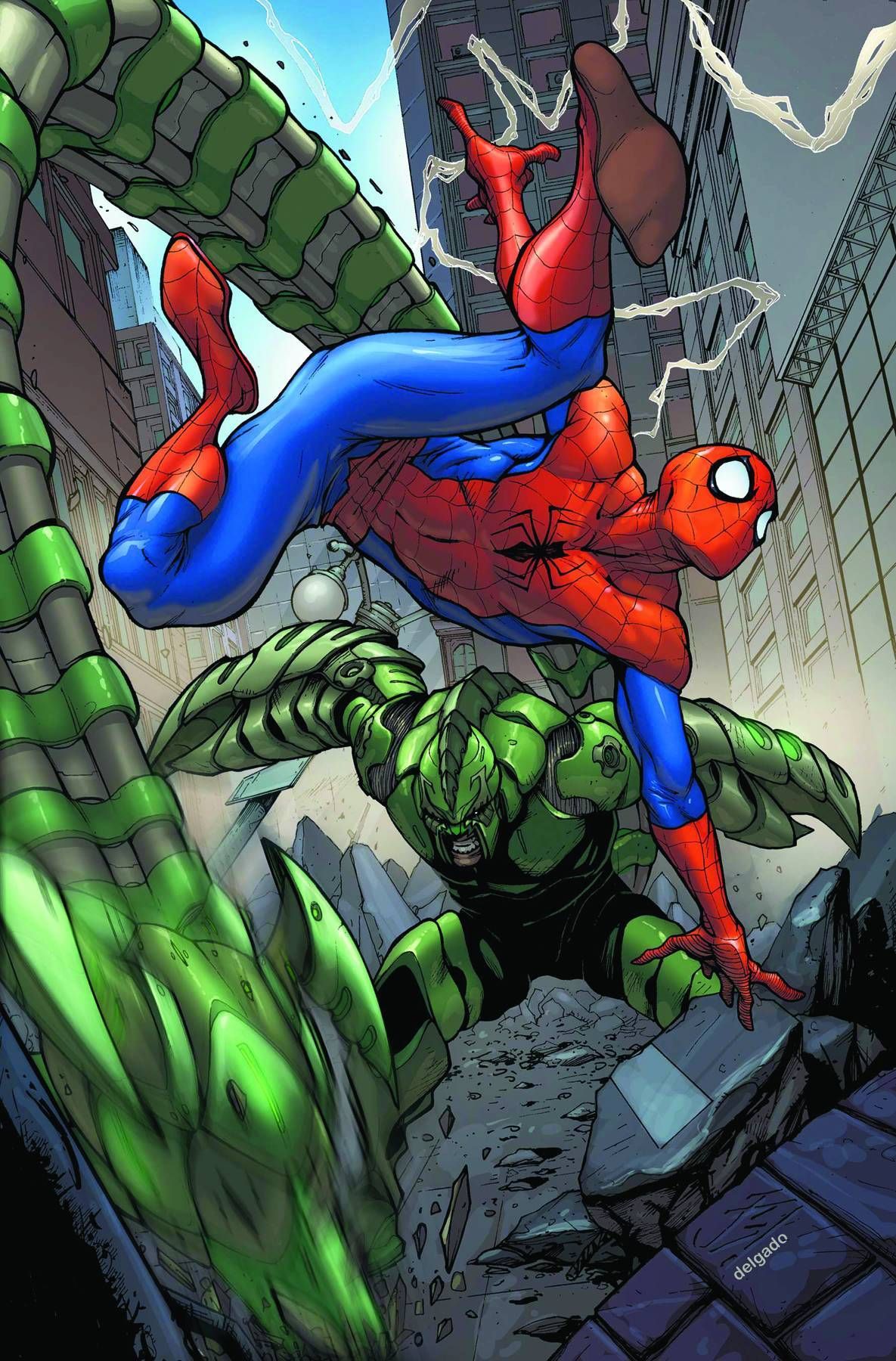 The Scorpion underwent a scientific experimentation to graft him with the traits of a Scorpion as such he has:

As Venom - Gargan had much of the same powers as Spider-Man and Venom.


MCU:
The character made his first cinematic appearance in Spider-Man: Homecoming (2017) and is played by actor Michael Mando.  Scorpion is thought to become one of the primary villains in sequel to Homecoming.