Who is Black Cat? Spider-Man Villains 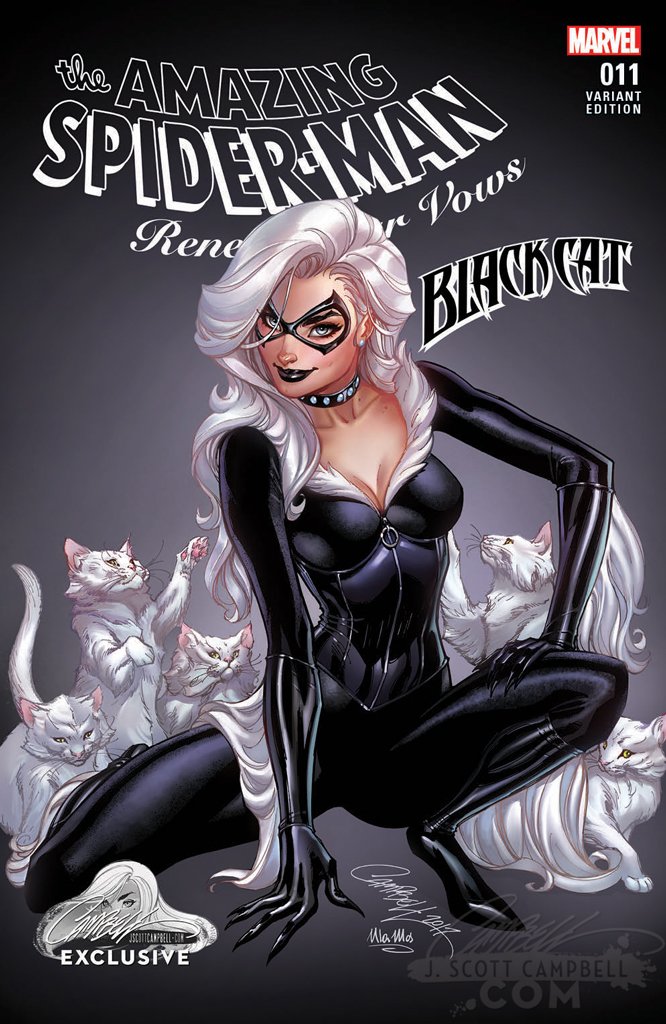 Felicia Hardy grows up as the daughter of the perfectionist cat burglar Walter Hardy.  Walter teaches his daughter to be the best at what she decides to do.  Also if she likes something she should attempt to be in the middle of it and settle for being on the sidelines.  Felicia is a bright student and attends Empire State University (Same University as Peter Parker) but is nearly raped in a bathroom before another student Ryan saves her.  However, after getting close to Ryan he betrays her by forcing himself on her when the two are alone.  Hating the idea of being victim she pours herself into learning how to fight.  She merges various fighting styles with her acrobatic gymnastic skills to become a fighter capable of hanging with super humans.  She then uses her new skills to pursue Ryan but is denied vengaence when he is killed in drunk driving accident.  Greatly angered at being denied vengance she decides to pursue a life of stealing like her father.  Felicia maintains a deep distrust and anger toward most Men due to her experience with Ryan.

After stealing enough to be considered wealthy she then pursues to break her father out of Prison. For this heist she decides to wear a costume and the Black Cat is born.  Her attempt to break her father out of Prison lands her in a face off with Spider-Man.  Something about Spider-Man's morality break through to Felicia and she begins to fall in love with him.  She begins donning the Black Cat costume more and more as the means of crossing paths with Spider-Man.  While generally being on the wrong side of the law the two develop a kinship for each other and occasionally for an uneasy truce.   Spider-Man went so far as to get amnesty papers for the Black Cat drawn up so she could be legally clean but these became useless when she did another robbery and then faked her death.

The Black Cat revealed to Spider-Man that the Kingpin and created a powerful detonator weapon.  The Owl and Doctor Octopus both had criminal designs to use the weapon on NYC but the Black Cat stole it before either could use it.   Doctor Octopus tracked down the Black Cat and his men shot her before Spider-Man was able to save her.  While in the hospital Spider-Man begins to realize how much he cares for her.  The two begin a romantic relationship when she recovers and Spider-Man reveals his secret identity as Peter Parker.  While the Black Cat adores Spider-Man she is less thrilled about Peter Parker.  She increasingly lives her life as the costumed Black Cat and doesn't understand while Peter can't do the same.  Though these arguments hurt Peter he accepted them because he enjoyed not having to lie about his double life.

Felicia became worried that her lack of super powers were becoming a liability with Spider-Man.  She feared that she would be used by another Super Villain to kill or hurt Spider-Man.  To counter this she decided to undergo a procedure that would imbue her with powers.  Unfortunetly these powers were directed and planned out by the Kingpin.  He gave Felicia a bad luck power that would work on anyone in her proximity. The bad luck jinx power began to effect Spider-Man anytime he was with her.  Eventaully, Peter sensed that Felicia was keeping too much from him and broke off the relationship.  Felicia hated that she had been the dumpee instead of the dumpor and was on the losing end with another man.

Doctor Strange began to study Spider-Man's bad luck and found that a permanent bad luck aura had been placed on him by the Black Cat.  He explained that it was not the Cat's fault and that it was inadvertent.  He removes the bad luck from Peter but in doing so alters Black Cat's powers.  Instead of having Bad Luck she now has other cat like powers such as increased Strength, Balance, Vision and retractable claws.  With the bad luck powers gone, and the truth out on what Felicia had been hiding the two begin their relationship again.

While everything seemed to be good with the Black Cat, Peter returned one day to overhear the Black Cat discussing a plan to ruin his life.  It seems she had never forgiven him for dumping her.  He followed her, and found that she was having a relationship with the Foriegner.  The Foriegner was the very villain that had been working to frame Spider-Man for murder.  With her betrayal exposed the Black Cat fled to Europe and Spider-Man rekindled his relationship with Mary Jane.

Black Cat had on and off again troubles with jealousy over Spider-Man marrying Mary Jane.  At times she attempted to break them and at times she accepted it.  She herself had relationships with Flash Thompson and the Puma.

After a Brand New Day, Felicia is able to remember the aspects of Peter's relationship but not the secret identity of Spider-Man.  Both Peter and Felicia are also broken up with their previous romantic interests of Mary Jane and Puma.    Spider-Man kiss on TV which is seen by Mary Jane.

Spider-Man and Black Cat begin a superhero romance where they always keep their masks on.  However this ends when the Black Cat steals a vial of of Spider-Man's blood and sells it Mr. Negative.  This ended their relationship.  However, when Spider-Man was caught by Doc Tramma she was contacted by Mary Jane who helped rescue him.  After this event Mary Jane and Felicia became friends much to Spider-Man's chagrin.

Black Cat and Spider-Man's feelings for each other take a drastic turn for the worst after she meets with the Superior Spider-Man.  The Superior Spider-Man is the body of Spider-Man with the mind of Doctor Otto Octavius.  While going on a date Octavius interupts a theft by the Black Cat.  When she attempts to flirt with him, he ruthlessly punches her full strength.  The punch pulverizes Felicia and she loses a tooth in the process.  Incapiciatated she is apprehended by the police and sent to Conway Penitenrary.  All of her criminal credibility evaporates at being so baddly beaten by Spider-Man.  She loses all of her possessions and criminal contacts.  The Black Cat in prison becomes determined to get revenge on Spider-Man and to become a force in the criminal world that no one can ignore.

In Prison Felicia creates a partnership with Electro and the two escape and take over the criminal empire of the Eel.  She infoms Mister Negative that she wants to join the criminal big leagues and will prove herself by destroying Spider-Man.  A battle between Electro and Blackcat with Spider-Man and Silk is had at the Fact Channel News Studio.  During this battle Black Cat is nearly able to reveal Spider-Man identity but the camera angle of Peter's face is blocked by the gloating face of Johan Jameson.  During the battle Electro loses control and accepts an offer to have his powers shut off by Parker.  The Black Cat escapes to continue her vendetta against Spider-Man.

Black Cat finds that her bad luck power is stronger the more ruthless she acts.  She sets fire to a building that is holding Jan and May Jameson in an attempt to get at Regina Venderkamp a wealthy elite who was seen holding some of Black Cat's former prized items.  Spider-Man saves everyone but is warned by the Black Cat that she has plans to be more ruthless than in the past.


Powers and Abilities
At different points in time Black Cat has no true super powers.  During these times she is an Olympic level athlete with a high degree of martial art and gymnastic training.

Tychokinesis - Ability to cause bad luck.  Creates probability fields that create the worst possible event occure in it.  These can effect anyone in her line of sight.


Black Cat in Film:
The Black Cat will be featured in the Sony film Black and Silver. 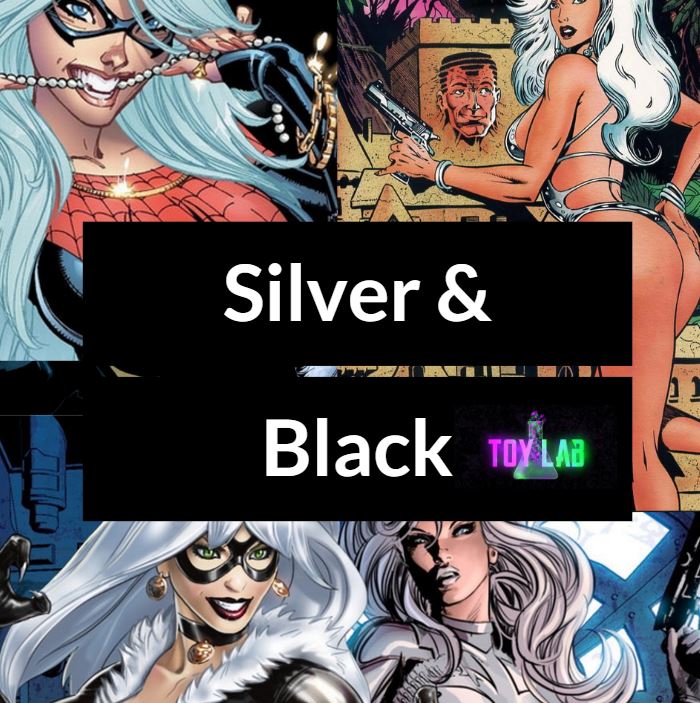 Email ThisBlogThis!Share to TwitterShare to FacebookShare to Pinterest
Labels: #BlackCat, #Marvel, #SilverandBlack, #SpiderManVillains, A villain or a lover of Spider-Man, Marvel