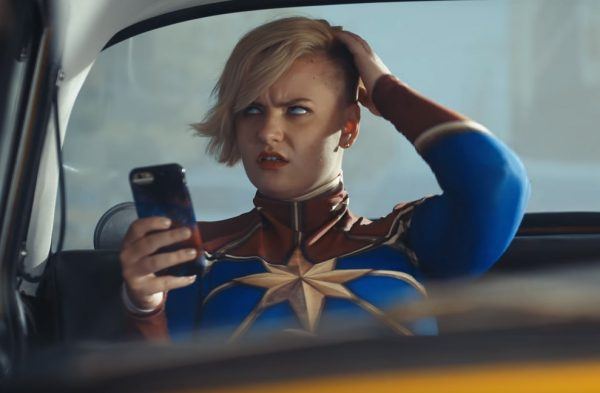 
Cosplay in a Cab
Marvel kicked off their promotion for NYCC with a set of promotions called Cosplay in a Cab.
In this video the cabby asks a cosplayer many questions and the cosplayer gets offended and makes a disgusted and disgruntled offended face.

Marvel Television is highlighting a number of new shows hitting in 2018 and they will promoting in NYCC with panels and also special Posters.    The Posters will be available at ticketed signing events.  The first signing event is Punisher on Saturday, October 7th at 11 a.m. The next event is Runaways on October 7th at 12:30 p.m. Agents of SHIELD signing takes place October 7th at 5:00 p.m. The signing for The Gifted takes place Sunday, October 8th at 10:30 a.m. All signings take place at the Marvel booth on the NYCC convention floor (#1354).

Panels at NYCC include a preview of Runaways on October 6th at 7:45 on the Main State of Javits Convention Center.  An Agents of SHIELD panel takes place at 2 pm at the Theater at Madison Square Garden.   Also at Madison Square Garden will be a Punisher Panel at 5:15.  On Sunday, Oct 8th 2:45 pm will be a panel for The Gifted at the Javits Convention Center's Main Stage.

Poster Reel:
Marvel has 4 posters for signings including an Agents of SHIELD season 5, Cloak and Dagger, Jessica Jones and Runaways-

Below is Marvel Television’s full schedule:
Friday, October 6
Marvel’s Runaways
Javits Convention Center Main Stage – 7:45 PM – 9:15 PM
“Marvel’s Runaways” makes a fresh landing in New York as Jeph Loeb, joins the stellar cast and executive producers Josh Schwartz and Stephanie Savage to let you in on some of the secrets and mysteries of the highly-anticipated, new Hulu Original Series, “Marvel’s Runaways.” You won’t want to miss this fun-filled panel featuring exclusive footage. And be sure to catch Season One of “Marvel’s Runaways” when it premieres on Hulu, November 21, 2017.
Saturday, October 7
MARVEL’S AGENTS OF S.H.I.E.L.D.
The Theater at Madison Square Garden – 2:00 PM- 3:15 PM
Join Jeph Loeb, in celebrating Season Five of “Marvel’s Agents of S.H.I.E.L.D.,” with the entire cast as they come together to Madison Square Garden, for the very first time, with an action-packed panel, Q&A and never-before-seen footage. This is the one you’ve been waiting for!
MARVEL’S THE PUNISHER
The Theater at Madison Square Garden – 5:15 PM – 6:45 PM
Be one of the first to see Jon Bernthal and the cast of Netflix’s hotly-anticipated original series, “Marvel’s The Punisher,” as they team up for a must-see panel and exclusive first looks at the upcoming season, launching globally on the streaming service later this year. “Marvel’s The Punisher” follows Frank Castle (Jon Bernthal), a man who, after exacting revenge on those responsible for the death of his wife and children, uncovers a conspiracy that runs far deeper than New York’s criminal underworld. Jeph Loeb will moderate the exclusive Q&A.
Sunday, October 8
MARVEL ANIMATION PRESENTS
Room 1A06 – 11:00 AM – 12:00 PM
Cort Lane (Marvel’s SVP Animation & Family Entertainment) and a super team-up of Marvel talent share surprise reveals and exclusive announcements you won’t want to miss! Lane will also preview development work on their landmark new series – “Marvel’s Avengers: Black Panther Quest.” Plus, never-before-seen footage from the animated series “Marvel’s Spider-Man” and “Marvel’s Guardians of the Galaxy” (even previewing Season 3, Mission: Breakout!).
THE GIFTED
Javits Convention Center Main Stage,  2:45 PM – 3:45 PM
From 20th Century Fox Television in association with Marvel Television, “The Gifted” tells the story of a suburban couple whose ordinary lives are rocked by the sudden discovery that their children possess mutant powers. Forced to go on the run from a hostile government, the family joins up with an underground network of mutants and must fight to survive.  Executive-produced by Matt Nix, Singer, Lauren Shuler Donner, Simon Kinberg, Jeph Loeb, Jim Chory and Len Wiseman. Join series stars and producers for an exclusive first-look of the second episode from the fall’s critically acclaimed new family adventure series which will air Mondays on FOX.
MARVEL TELEVISION AUTOGRAPH SIGNING SCHEDULE:
Please note that signings are ticketed events and passes will be available on a first-come, first-served lottery basis beginning at 10:00 AM on Saturday, October 7 and Sunday, October 8 at the Marvel Booth #1354.
Saturday, October 7
11:00 AM – Marvel’s The Punisher Signing Event
12:30 PM – Marvel’s Runaways Signing Event
5:00 PM – Marvel’s Agents of S.H.I.E.L.D. Signing Event
Sunday, October 8
10:30 AM – The Gifted Signing Event
Join the conversation using #MarvelNYCC. Stay tuned to www.marvel.com for all the breaking news from Marvel Television at New York Comic-Con. Follow @Marvel on Twitter and “like”Marvel on Facebook for minute-by-minute updates on all things in the MCU.


Marvel Store
Marvel has some awesome toys and merchandise.  Toylab is a member of the Amazon Affiliate program so that we can bring you the best deals on Marvel toys and gifts for you to check out.  To check them out just click on the products below or feel free to change our search bar to better meet your needs.