Did Snoke drop off Rey on Jakku? 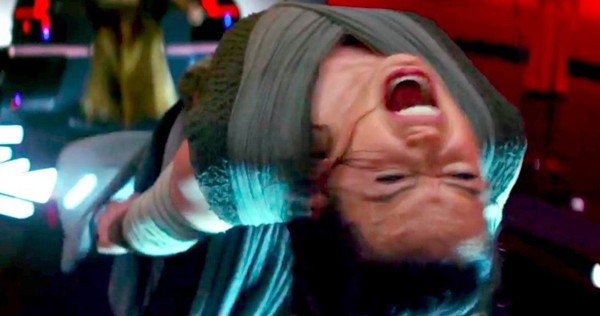 
There is a theory that Snoke has met Rey before based off what he says in the 2nd Star Wars: The Last Jedi trailer.  Snoke's lines could be refering to Kylo or Rey as being very powerful and special.  Snoke says in particular:

“When I found you, I saw raw untamed power and beyond that something truly special.”

This Snoke / Rey theory then posits that Snoke himself dropped off Rey on Jakku as part of a masterplan.

I like this theory but it has some major flaws.  While Snoke may have met or seen Rey prior to them meeting in Last Jedi he could NOT be the person that dropped her off on Jakku.  The person that dropped Rey off on Jaku is also NOT Luke.  This person likely has a very strong association with Luke though as I will explain.  You need to keep one very important fact in mind.

The person that dropped Rey off on Jaku had Anakin's light saber in their possession.  (You can take that to the bank)

The reason why I can confidently say this is due to the Light Saber theory where the vision Rey recieves in Force Awakens is not her vision, it is actually the Light Saber itself communicating its own memories.  While this may seem weird to casual fans the current Darth Vader comics are delving heavely into how light sabers themselves are sentient and can communicate.

So what does Anakin's old Light Saber tell Rey.  It shows her the following things (Its memories):
What you can see is that the memories of the Saber are from a person other than Luke after the battle on Cloud City.  Who is this person?  We will call them Person X.

We also know that after the slaughter at the Jedi Temple this mystery person who is with Luke, is saved by Kylo Ren  and also  is likely the person that gives Anakin's lightsaber to Maz Kanata.  This person is the one who also dropped off Rey on Jakku.  We know it because the Light Saber was in all of these different places.

Who is this person X?  I don't know.  They are definetly known to Rey, Luke, Kylo and Maz Kanata.  I think we can also infer that Snoke through Kylo knows who this person is and who Rey is.  For all that though I don't see Snoke fitting into that.  I don't see Snoke chilling next to Luke when he places his hand on R2.  We also see the ship in the Light Saber vision taking off from Jakku and it is definitly not an Imperial Ship once again this leans to somone who is a close confidant of Luke and not Snoke.

If I had to posit a guess.  Rey is Palpatine and was met by Snoke in some way prior to falling into the hands of Luke.  Luke sees her as too dangerous to train and instead has her hidden away by person X in a place even he does not know.

Want to know more about who Rey and Snoke are?  We have compiled a variety of facts and theories on the following pages.....