Who is the Russian?

Who is the Russian?

The Russian is a villain of the Punisher known for nearly beating him in his first appearance.  The Russian was also effectively resurrected and brought back as a cyborg enhanced hit man.  In both apperances the Russian was shown to be insanely durable and finally was killed by being tethered to a nuclear bomb.   The Russian appeared as a villain in the film "The Punisher" (2004).

Alias(es): The Russian, The Ivan

Quote: "Dosvidanja, Big Boy! The Russian really has to hand it to you!" Final line of the Russian as he was dropped out of a 747 chained to a Nuclear weapon. 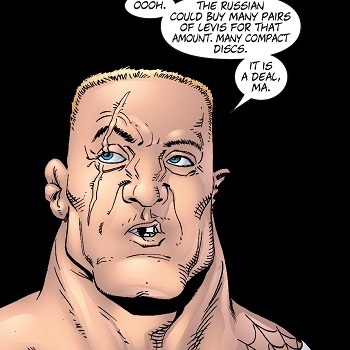 The Russians origins are mysterious but he is believed to have a connection with Afghanistan.  After which he became a mercenary fighting in places including Lebanon, Iraq, Rwanda, East Timor, Chechnya, the Balkans and Belfast.  He acquired a large reputation for being both brutal and being nearly unkillable.  He is also considered to be a cannibal after eating a man on a bet in Belfast.  He is wanted dead by numerous goverment and criminal organizations.


Though dead the story of the Russian is not over.  The body of the Russian is obtained by a Russian General named Kreigkopf who brings the Russian back to life with various cyborgnetic enhancements.  The Russian is given animal organs and metal augmentation.  As a result of the hormone treatment the Russian also grows breasts and begins dressing as woman.  The Russian's primary desire is to get a rematch vs the Punisher and this request is granted.

This time the Russian throws the Punisher off the Empire State Building but the Punisher is saved by Spider-Man.  The Punisher uses Spider-Man as a human shield he then uses the webslingers webshooters to knock the Russian off the building.  The Russian crashes through the street before being hit and run over by a train.  He still survives though is baddly wounded and retreats back to Kreigkopf's base at Grand Nixon Island.  Though he survives he is denied his request to go after the Punisher again.

The Russian Skills and Powers:
The Russian is one of the toughest physical fighters faced by the Punisher.


There are no mentions of The Russian appearing in the MCU at this time.

The Russian does appear in the film The Punisher (2004) where he is played by WWF/WCW wrestler Kevin Nash.  After a brutal hand to hand battle the Punisher finally gains the upper hand by pouring boiling oil the Russian's face then kicking him down a flight a stairs where he breaks his kneck.  The Punisher is not a film in the MCU.