Who is Barbatos in Dark Knight's Metal 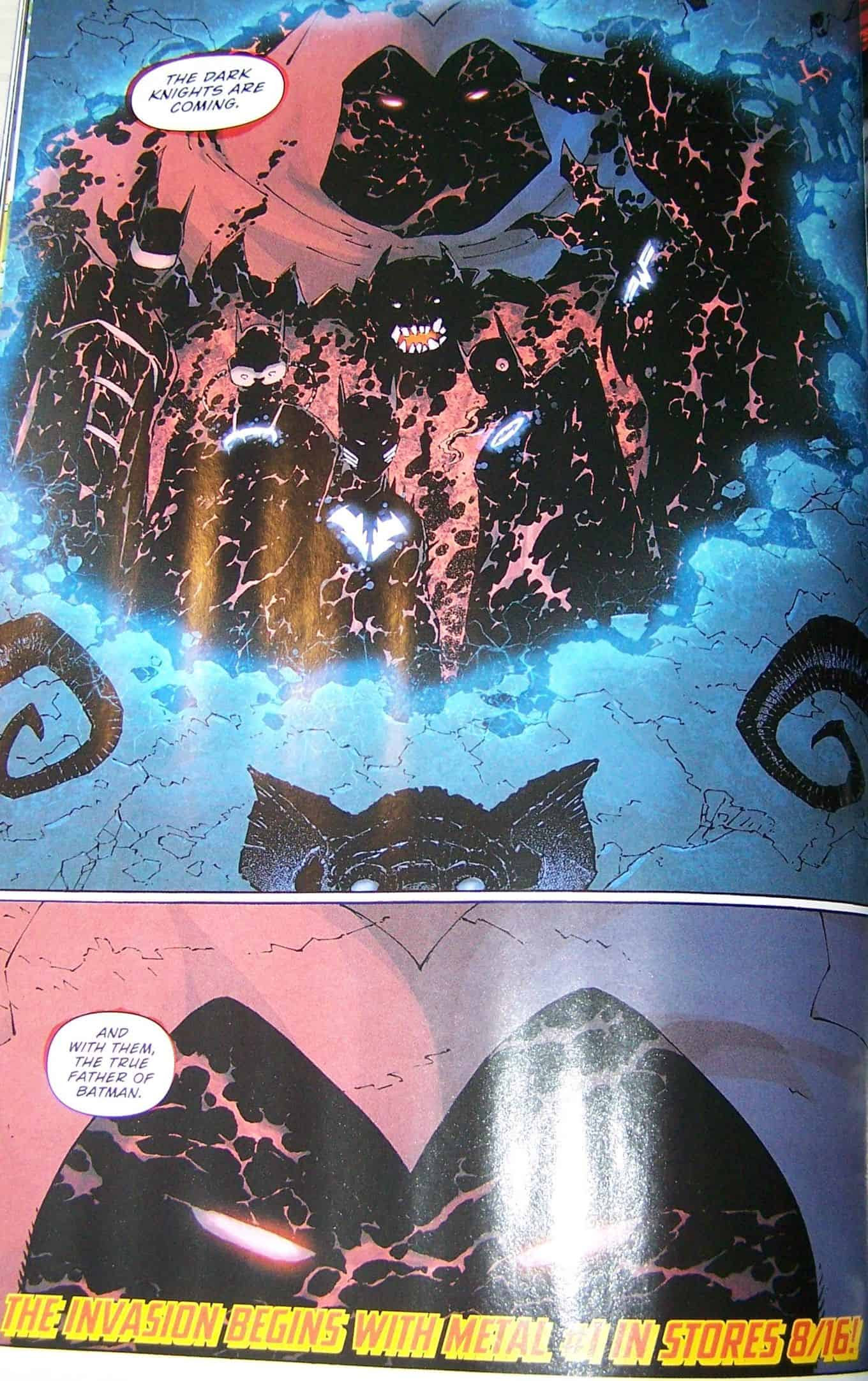 DC Metal's is going to unleash host of bizarre and evil Batmen on the DC universe but leading them all is the events Big Bad, a demon named Barbatos that has deep ties to Batman himself.  After reading Metal (Which is awesome by the way).  You may ask yourself the question.


Facts about Barbatos:
In Dark Night City the vision of Barbatos was literally that of a phantom bat but it is hard to know exactly what he will look like in Metal.


Here is what we can glean about Barbatos:
Barbatos is also a demonic figure mentioned in various sorces:  From Wikipedia:


In demonology, Barbatos is an earl and duke of Hell, ruling thirty legions of demons and has four kings as his companions to command his legions. He can speak to animals, can tell the future, conciliates friends and rulers, and can lead men to treasure hidden by the enchantment of magicians.
His name derives from Latin barbatus, meaning “bearded, old man of the demon of hell, philosopher”.
He is the 8th demon in The Lesser Key of Solomon, while Pseudomonarchia Daemonum lists him as the 6th demon. He is also mentioned in Grand Grimoire as subordinate of Satanachia.

DC Metal revealed that Hawkman had been researching the Nth Metal over many generations and come to the conclusion that it was tied to a dark entity known as Barbatos.  This Barbotos is an ancient entity whose origins go back to the ancient times of the DC Universe.  This Barbatos is the leader or big bad behind an array of evil Batman that are coming to attack the DC Universe.  Barbatos and his forces are thought to come from the Dark Universe, outside of the 52 main DC universes.

Metal discusses how going back to antiquity were three main tribes when a big dark 4th tribe came to battle them.  Presumably the 4th tribe is the "Bat" tribe.  The Bird and Bat tribe have battled throughout the centuries.  This is one reason why Batman is surrounded by many Bird characters like Robin, Penguin and the Court of the Owls.  The Nth Metal that creates bizarre and unnatural powers is said to get its energy from the dark universe in which the leader of the Bat Tribe resides.  The Nth metal is also thought to be sending waves out to this universe effectively communicating with this big bad being known as Barbatos. 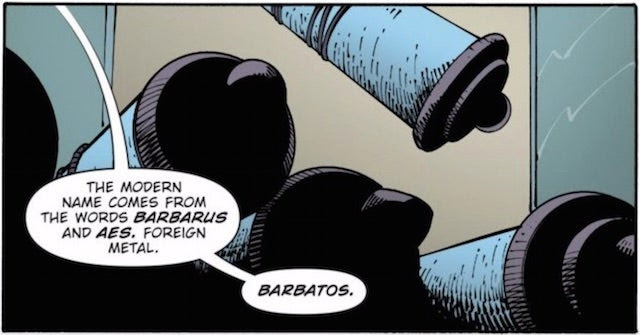 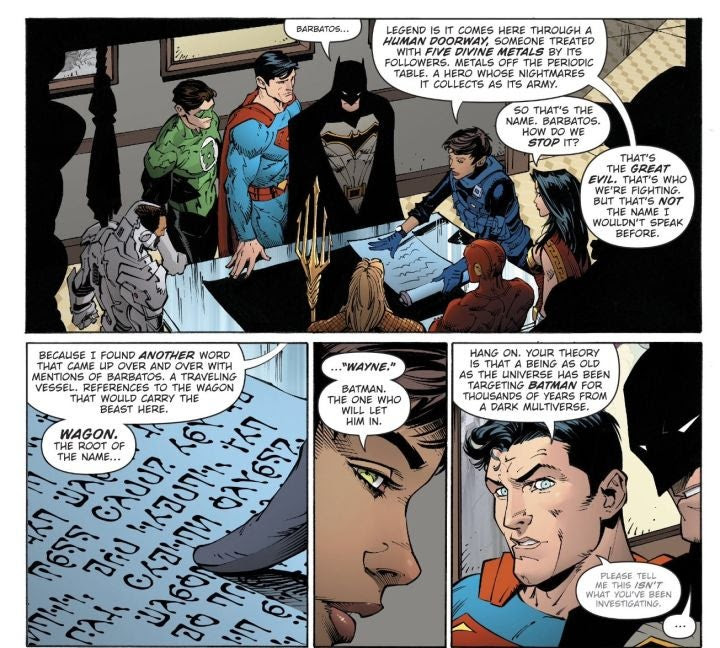 It is also revealed by Madame Dark Hawk that Bruce Wayne is expected to be the person who opens the door for Barbatos to invade the world.  However, Carter Hall aka Hawkman seemed to disagree with her.  He hid his journal about the Dark Universe / Nth Metal mystery in Wayne Manor in a place that would be revealed to the perosn he trusted when the time was right.  It seems that while the Bird and Bat have been at it for centuries that Hawkman believed Batman was the only one who could stop the threat that was coming.


"I have left this journal for you. In your house. The house of the family I trust most.  Turned from Tribe Bat, to Tribe Bird. The Waynes.
Left it in a secret place that will make itself knwon to you through metal should I be wrong, should energy from the dark rise to foretell the coming of Barbatos.

Hawkman's faith in Batman seems to be well founded as Batman himself has been diligently researching Barbatos to uncover and thwart the threat that is coming for the DCU.  Though as Batman escapes from Lady Dark Hawk in Metal #1 even he seems to worry about the possibility that some how the knowledge he amassed to stop Barbatos could be used as the means to bring him into their universe. 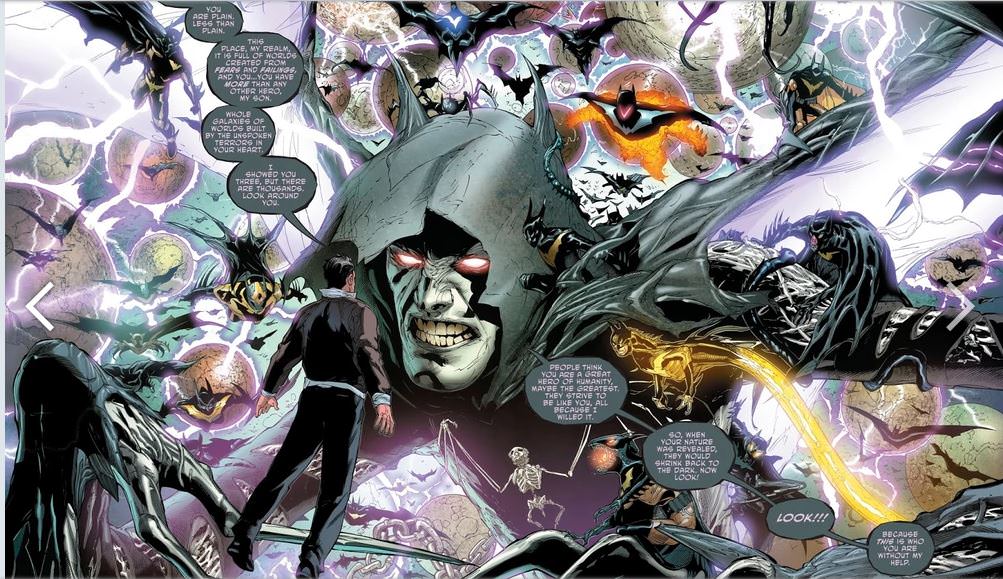 When Batman goes back in time to stop Barbatos he falls into his trap is injected with one of Dark Metals and is used as a portal for the evil, Batman doppelgangers to invade Earth Prime from the Dark Multiverse.   Batman himself is then put into a dream like state in the Dark Dimension where he lives in a illusion that he is an old man reading the exploits of Batman to his daughter Janet.  However, at one point he notices a discrempency in the story and realizes that everything he is living is an illusion.  This brings him face to face with Barbatos.  Barbatos reveals how his guidance created Batman and made him into the hero he was.  Barbatos also reveals how the fears of Batman helped create the legions of evil Batman that Barbatos is using the conquer the world.  In the end Bruce was so horrified by the revelations of Barbatos that he asked to be put back into the dream. 
"One of my favorite stories is Dark Knight, Dark City by Peter Milligan. It imagines that many years ago, in colonial times, a group of Gothamites try to summon a bat demon called Barbatos. The mystery in the present involves the Riddler, who runs Batman through a gauntlet of weird cases, all to secretly treat him with the substances and ritualistic materials needed to open a gateway to let Barbatos in again. In the end we’re left unsure whether Barbatos was a real force in Gotham’s history and in Batman's own construction. Recently, Grant [Morrison] touched on this story with his creation of Dr. Hurt and the journey of the hyper-adapter... all things we’ll be building on inMetal to make Barbados a villain like nothing you've ever seen."


It seems clear from all this that Barbatos has been preparing to attack the DC Universe for many years and his vanguard force is a terrifying array of Batman that have all been Super Powered up in various ways and all terribly corrupted.  These evil Batman will have their origins told in 7 1 shot comics.

The over all goal of Snyder is to great a fun and action packed Summer comic event.   All based around the biggest character DC.