While Metal is deservedly getting a lot of focus now in November another high profile DC event will show up on shelves in the form of Doomsday Clock.  This promises to further tie the events of Rebirth to that of the Watchmen Universe.  This will be a 12 issue story so a lot of story can be told here.

While the Button primarily focuses on Batman and Flash's investigation into Rebirth this story will shift its focus toward Super Man and to the man behind the curtain in Oz.    Of course in DC when the word Doomsday shows up everyone knows to expect the big bad gray guy as well!  You know who I am talking about, this means Doomsday is a cometh.  So Superman vs Oz, vs Doctor Manhattan, vs Doomsday!  Come on this is going to be awesome.

DC has announced that Doomsday Clock will come with a Lenticular Cover (Which have been selling like hot cakes).  This cover will feature the Watchman member Rorschach.   The inclusion of Rorschach here is really interesting  could Rorschach help Superman uncover Doctor Manhattan and how to beat the god like Manhattan.  Just think about how fun and crazy a teamup between Doctor Manhattan and Superman could be. 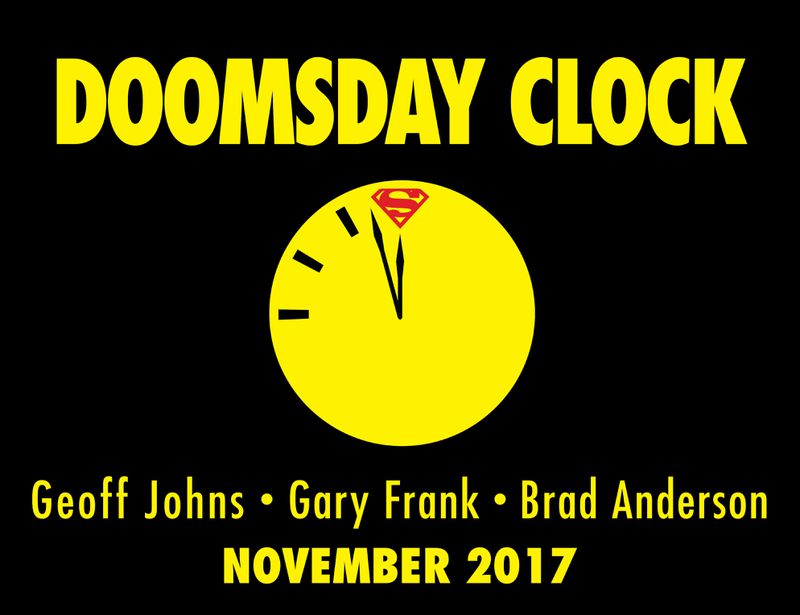 The tease of other Watchman characters showing up is also very real.

Geoff Johns who has helmed the Rebirth reboot very well so far is in charge of the series.

I really don't know what to say other than DC's Print Future looks exciting.  I will bring updates as they come in through out the con on this post.  Stay Tuned!


In the most anticipated story of the year, New York Times bestselling writer Geoff Johns confirms Watchmen will make an epic return to the DC Universe this November. As “The Button” crossover comes to a close in FLASH #22 this Wednesday, the four page epilogue affirms the mystery will continue with DOOMSDAY CLOCK from Johns and legendary artists Gary Frank and Brad Anderson.
“It's time. Last year, the DC Universe confronted the legacy of Watchmen in Rebirth the way Watchmen confronted the legacy of superhero comics three decades ago,” explains writer Geoff Johns.

“Thematically, and metaphorically, there was no better choice than to use Dr. Manhattan. If you’re going to have a conflict between optimism and pessimism, a battle between the very forces of hope and despair, you need to have someone who personifies the cynicism that has leaked into our hearts and also has the ability to affect the entire DCU. It’s all paying off this November with DOOMSDAY CLOCK.”

“DOOMSDAY CLOCK is a story for fans who love the DC Universe and Watchmen and want to see what a master of this genre creates when he puts them together,” says Frank. “As for my artistic approach to the series, each panel is extremely detailed and I am constantly thinking through the position of every single element.”