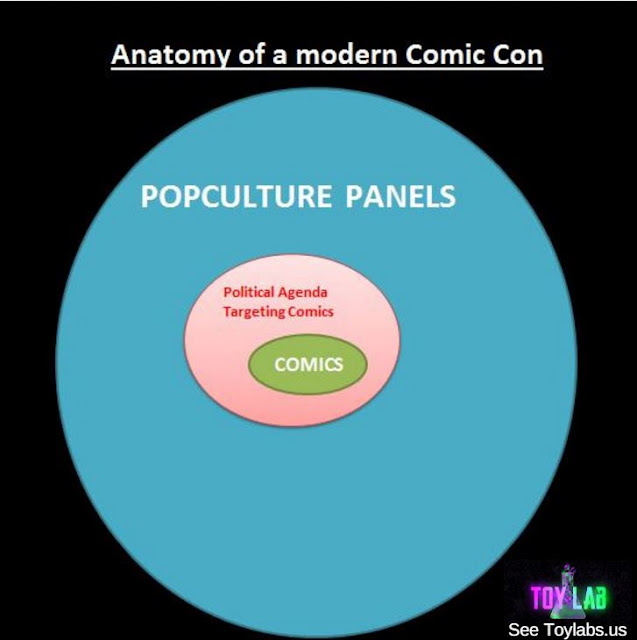 A Study of the Con #2
This is the 2nd post in a series called "A Study of The Con" by Toylab Blogger Marvel Matt.
You can find the first post in the series at: A Comic Con Atomic Bomb just went off! but did anyone notice?

This view was further entrenched by the worlds biggest comic vendor Mile High Comics to forego the short trip from Denver to San Diego for the first time in 44 years.

I have continued to write my "Study of the Con" about how Conventions have morphed into PopCulture conventions with very little comic orientation and also how a new counter movement has begun in Denver.

Curiousily though as I am sorting out my own thoughts a retort to my first writing appeared on Bleeding Cool.  Bleeding Cool is a fantastic comic blog, and they are very large so their retort could be directed at anyone.  Certainly, though it takes aim at people who share my view that the major Comic Cons have completly become Pop Culture Cons.  I could similarly retort toward a vaguely labeled group of people but I come from a wrestler/ mma background and I can't help but argue like one.  I don't like to argue against air, nor will I make crappy little comments then turn my head quick like it was a mistake. Sorry I'm not British.  No I argue by looking directly in my opponents eye,  and say this is who I am, this is why I think your wrong, now do your worst.  If my opponent lands a good shot, great, I'll spit out the blood, and smile.  I am a bit nuts, but that is who I am at my core.  I love honesty, transparency and love, love, love to say "Bring it."

I am going to argue why this article at Bleeding Cool meant to be an argument why comics are still relevant at San Diego actually proves why they are not.
https://www.bleedingcool.com/2017/07/10/people-say-san-diego-comic-con-isnt-comics-anymore/

Bleeding Cool counters my objections by stating with an argument of relativism.  They say that even though San Diego evolved or de-evolved away from Comics it is still the best place to go in America for a Comic Fan.  Essentially even though the con has become dysfunctional it is less dsyfunctional than the others who are even more dysfunctional.

My retort is that San Diego and the other Comic Cons could do much better at focusing on comic fans.  Not only that, but San Diego used to be better (No more than 5 years ago).  My major point though is that something is coming, a new Con Movement that will hands down be better for comic fans.  What I see happening in the USA is that many comic fans recognize that their bus has been hijacked but rather than whine about it they have decided to build a new bus.  Does this new bus present a major challenge to San Diego...not yet.

Let me also say that what San Diego Comic Con has become is perfectly OK.  It is actually really cool it is allowing the world at large to have what us comic geeks have long had.  A place to show up and share interests.  Its awesome.  But lets get real it is not about comics anymore!  Lets call it what it is a Pop Culture Con.

The part of Bleeding Cool's argument that was entirely humourous (absurdist) was their submission of the "Comic" themed panels of San Deigo Comic Con as proof at how lively the comic culture is there.  Well there is an immediate problem with 90% of these panels.  These panels are less about comics, than they are about people with an agenda, subverting comics, to discuss some pet issue.  I am not going to sit around and say I agree/disagree with this or that pet agenda, who cares, the point is this is a bunch of internet trolls whove never read a comic, who are given a soap box to belly ache to comic fans about their issue.  Sometimes these panels are good, and frankly they should be at comic cons.  However, when you look at how many of them there are as compared to true comic oriented panels the issue is striking.  Of the 16 panels mentioned by Bleeding Cool I would put 14 into a Political Agenda category, and 2 in the Comics category.  Thats f'beeping marbles! (Yes Bleeding Cool I used marbles to British up my comment, I apologize if British people don't actually say Marbles, it seems like something you say.  If its not I'll just blame hollywood and pop culture).

The area of the con that Bleeding Cool is suggesting comic fans go to, comic fans will find 90% of the panels being about xyz agenda and how comic books have besmirched them.  My guess is that they will not find other comic fans there and instead find a bunch of chello shaped, angry people, with an xyz chip on their shoulder wanting to throw that chip at comic fans.  These are not comic panels but political subversion of comic panels and generally speaking comic fans are way too smart for that, and just don't go to them anymore.  Why would they? They are not really comic book oriented.   If there are 10% of these in the comic panel population so be it, but should they really constitue 86.5% of the comic panels?  That ratio is absurd, and I refuse to follow that line of absurdity anymore.  Comic Fans can do better.

Notice I said Comic Fans can do better and not Comic Fans deserve better.  I live in a world of action and capability and actively seek to shape it toward what I want.  I don't live a world where I pontificate on what should be handed to me, but in a world of what I myself can do.  Which is why and how I get crap done.   In the upcoming posts of a Study of the Con I will discuss the ways that a true comic oriented Comic Con is reemerging in Denver and how comic fans all over the world can do the same.

If you doubt my analysis of these San Diego panels that is ok and your welcome to your opinion.  You can see how I broke it down below.
I have put the titles of the panels here but feel free to go to Bleeding Cool's post and read the full description of each panel.  The panels themselves are fine, it is the ratio that is absurd. 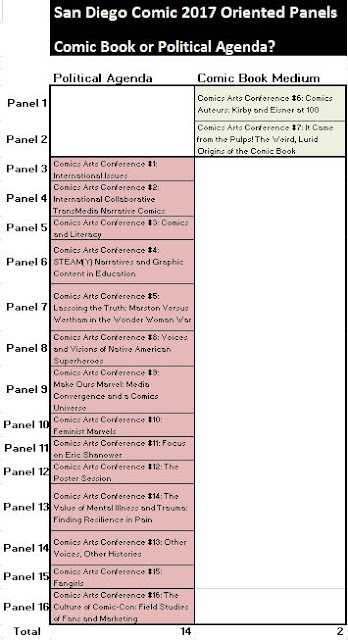 To be continued in A Study of the Con #3.

This was the 2nd post in a series called "A Study of The Con" by Toylab Blogger Marvel Matt.
You can find the first post in the series at: A Comic Con Atomic Bomb just went off! but did anyone notice?