A Comic Con Atomic Bomb just went off - Did you hear it? 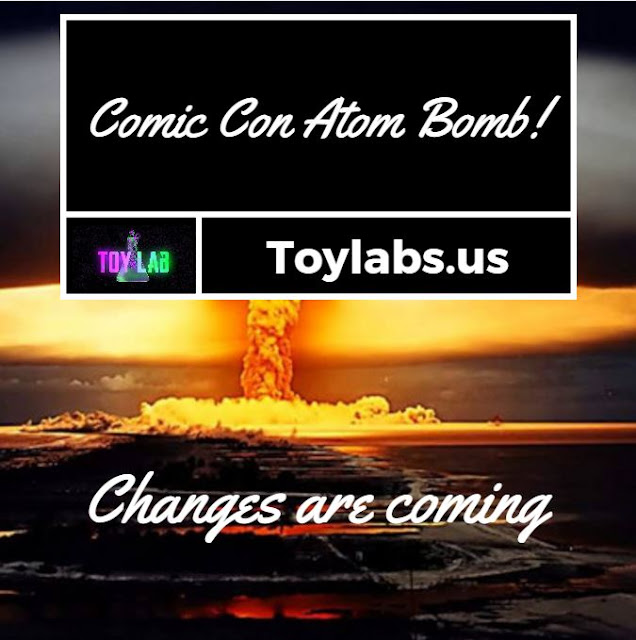 This is the first post in a series called a Study of The Con by Toylab Blogger Marvel Matt.

If a tree fell in a forest and no one heard it did it make a sound? So goes the annoying Philosophy 101 question, that I am now going to subvert for my own selfish purposes.

If a nuclear bomb went off but only destroyed the true comic centric side of a comic convention are there any people left who care enough to notice?

Denver Comic Con just finished.  As usual I hit the con very hard with my team of bloggers and family.  We both had fun, took a lot of pictures and attempted to bring some of the content from the con back to viewers from all over the world.  I love these things, I get exausted at these things, but at this con in particular a spectre that had been growing in me for years, really took hold.   Small worries, and annoyances began to cling together, began to take on shape.  Slowly collecting themselves like droplets of black goo until they came together like the Demagorgon of Stranger Things.
The monster had been taking shape for awhile but at Denver Comic Con 2017 it began to breath, ITS ALIVE!!!!!!!!!.

I remember the exact moment this happened, I was staring at a sign for John Cusac and wondering why the F'Beep he was there and a 60 year oldish woman wearing a Nebraska Corn Huskers shirt walked past me and said "OH JOHN CUSAC we have to go get his signature to show our grand kids."  Her husband also wearing Corn Husker gear simply responded "Wow" Like it was the most amazing thing he had ever seen.

That little moment ripped a hole in my soul and out sprang the monster.

Many small worries had been pushed aside for too long and now I could no longer avoid the monster that stood before me.  The monster said to me.

Comic Cons are not about Comics anymore...

After ignoring the signs for too long, I finally began to ask myself hard questions...

There are things about Comic Cons today that are so unbelievably cool.  They are so cool that in many ways I want to avoid the increasing amount of problems they have.  In some ways they are far more awesome than what comic cons were in the past but curiousily they increasingly do not meet the needed functions of the old comic cons.  By not meeting those needs what then happens to the overall comic industry that the overall con is built on?  What has happened?  Why did it happen? and also what changes loom?

Today another shoe dropped or perhaps another blow was delivered.  No that is not it.  Today the comic world was hit by equivalent of an atom bomb.

This was another shot that came from Denver.  Mile High Comics announced that for the first time in 44 years they will not be attending San Diego Comic Con.  This means that Mile High Comics has been to every San Diego Comic Con since 1973! and will not be there in 2017.  How many other vendors could claim that?  To put this in words people might understand Mile Comics has been at San Diego 30 years prior to cosplay even being a word.  Mile High has been there since before most of you reading this were born!  Hell it was there before some of your parents were born!

This should be a huge deal.  The biggest dealer of comic books in the WORLD is not going to the biggest Comic Convention only a few states away.  This is an A BOMB, this is HISTORY, this is crazy but all I hear is silence....

In the Mile High Comics Newsletter the store's owner Chuck Rozanski (Easily the most iconic comic dealer of all time) laid out his reasoning for not attending San Diego.


To explain a bit more, my first little one-table booth in 1973 cost $40 to rent for the weekend. When we received our booth renewal for last year, our costs for our 70' of space had been raised to over $18,000. While quite costly, that one factor alone would not have precluded us from returning, as we had paid$16,500 in rent the previous year.

What made the situation nearly impossible, however, was that foot traffic in the exhibit hall declined dramatically last year. Even at its peak on Saturday afternoon, our end of the building (which was primarily comics) was uncrowded. The San Diego Fire Marshals were partially to blame, as they put much stricter controls on the number of badge holders allowed in the building at any given time. That might not have been such a bad idea, except that it amplified the harm already being caused by the incredible proliferation of off-site events that are now being set up for upwards of eight blocks all around the convention center. When you can see GAME OF THRONES, POKEMON, and hundreds of other exhibits across from the convention hall for free, why bother going in to the hall? Many fans did not.

These changes laid out by Chuck are happening at every con I have been to.  The celebrity sections are packed, the video game areas are packed, the artist alleys are still busy but the comic sections are pretty quiet and off to the side.  What used to be the reason and focal point of the event is now a tangent thing.  Many people who go to Cons no longer have any interest in actually buying comics or in even talking about comics.  They are going to see John F'BEEPING Cusak.

Chuck does not say it very loud but he does mention it:


To explain,San Diego has grown far beyond its original premise, morphing from what was originally a wonderful annual gathering of the comics world, into a world-renown pop culture and media festival. As such, it has seen rapidly escalating costs, and also a dramatic change in the demographics of its attendees.

The people that go to comic cons are not the same people that used to go to comic cons.  It has not been a bad thing, in many ways it has made cons more fun but it is different.  There is a worry here though and I will say it with a question.   What happens if the new group crowds out the old group?  There are implications, problems and now those problems are trully taking shape, they have become a true demogorgon.

I see Mile High Comics decision not to go to Denver Comic Con as a massive atom bomb that destroys a huge part of what cons used to be.  It is a massive blow to the con itself, it literally wipes out and kills what Cons used to be.

The scary thing is that I feel very alone in the online world for even noticing that it occured at all.  But like it or not Mile High Comics decision to not go to San Diego means something.  Now it is time for comic fans to figure out exactly what.

To be continued in A Study of the Con.

This is the first post in a series called a Study of The Con by Toylab Blogger Marvel Matt.