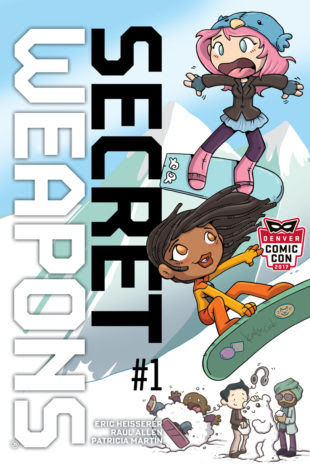 Valiant will be rolling deep into Denver Comic Con and they have a lot to check out!

Books: Will be selling specail variant cover of Secret Weapons with art by Katie Cook.

Valiant 101 Panel:  There will be a panel on Friday called Valiant 101 which is meant to be a primer for new readers of the publisher to know where to start.  Toylab Bloggers should be there!

From Friday, June 30th to Sunday, July 2nd, Valiant is bringing its cross-country road show to Denver, CO for Denver Comic Con 2017 – and we’re bringing a star-studded line-up of exclusives, programming, and panels for a can’t-miss comics celebration!
All weekend long, join Valiant inside the Colorado Convention Center at booth #1546 to see why Valiant is the award-winning, chart-topping superhero universe to beat with a selection of paperbacks and deluxe hardcovers for critically renowned and award-winning titles including BLOODSHOT REBORN, BRITANNIA, DIVINITY III: STALINVERSE, FAITH, NINJAK, QUANTUM & WOODY, SAVAGE, X-O MANOWAR (2017) and many more!
And don’t miss the mountains of Valiant merchandise rolling into Denver, including the SECRET WEAPONS #1 DENVER COMIC CON VARIANT, featuring the art of fan-favorite artist Katie Cook (My Little Pony: Friendship is Magic)! THE MUST-READ NEW SERIES of the summer from Academy Award-nominated writer Eric Heisserer(Arrival) and visionary artist Raul Allen (WRATH OF THE ETERNAL WARRIOR) with Patricia Martin (BLOODSHOT REBORN) begins here as the technopathic hero Livewire steps into the fore to lead an extraordinary new team of Harbinger Foundation escapees…and reveals a hidden, high-stakes corner of the Valiant Universe never before explored…
Plus: Be sure to visit the all-star Valiant talent that’s charging into Denver Comic Con 2017 all weekend long, including:
Then: Your official introduction to Valiant’s award-winning pantheon of heroes begins on Friday, June 30th at 2:30 p.m. MST in room #501 for the VALIANT 101: THE STORY STARTS HERE panel presentation! New to the Valiant Universe? Jump on board right here with a concise and fun-filled introduction to the origins and adventures of Valiant’s greatest and most iconic heroes – from BLOODSHOT and DIVINITY to FAITH and HARBINGER RENEGADE to NINJAK and X-O MANOWAR! From The A.V. Club to Buzzfeed and Entertainment Weekly and dozens more, Valiant has been hailed as the premier superhero publisher in comics today… Now, look no further than this panel of Valiant all-stars to find out where to start!
Finally: Get the inside intel on the most devastating conflict to ever disrupt the Valiant Universe on Saturday, July 1st at 2:30 p.m. MST in room #501 for theVALIANT: THE ROAD TO HARBINGER WARS 2 panel presentation! The road to Valiant’s biggest, most ambitious and impactful comic book event of all time starts right here! Jump on board to find out what the future holds for HARBINGER RENEGADE, X-O MANOWAR, BLOODSHOT, FAITH, DIVINITY, NINJAK, and the rest of Valiant’s most powerful heroes… and how the coming of HARBINGER WARS 2 will soon be felt across the entire Valiant Universe!
We’ll see you in Denver! And don’t miss a moment of the incredible action as Valiant’s cross-country convention road show charges on through Hartford,Wantagh, San Diego and more throughout the summer!