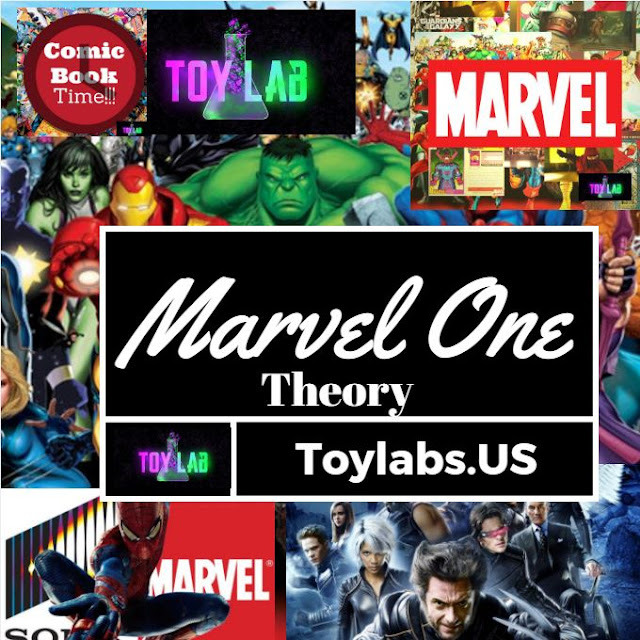 The Toylab Bloggers have been looking a lot and drilling into the film worlds and the plans for both the MCU, Fox and Sony.   Things are starting to take shape and a very cool idea has been formed.

We call it the Marvel One theory.

I would honestly like to call it the TOYLAB MARVEL ONE theory but I am not sure if we can Trademark it so I will just settle.

The idea of Marvel One is really simple.  Avengers 4 was initially called Infinity War 2 however that title has since been removed.  The growing thinking amongst us is that, that film may be culmination of not just the MCU but have Kevin Feige's going all the way back to the original X-Men and Spider-Man films.  That Avengers 4 a cosmic event will occure that will unite all of the Marvel properties Universes into ONE single universe.  That means Fox's Fantastic Four/ X-Men, Sony's Spider-Man and Marvel's MCU character would all begin coexisting in the same universe.  Not only would this occure with that film but it would also serve as a reboot point where new actors would be brought in for the major characters.

Update: 11-28-2017 Deal stalled but then came back ROARing!
Deadline reports:


Disney is progressing speedily toward that rumored acquisition of Fox. The version I heard has the Murdoch clan keeping possession of sports and news properties, and the rest of TV and the film studio going to Disney.


Update: 11-6-2017 Disney pursues Marvel One Universe:
David Faber of CBS reports (More on deal read here) on a massive deal brewing Disney and 21st Century Fox which would see all of Fox except for News Broadcasting being purchased by Disney.  This deal would have the side effect of bringing all of Fox's Marvel rights together with the Marvel licenses.  This would mean both the Fantastic Four and the X-Men would finally be part of the MCU.

If Marvel could continue to work with Sony then they would have the licenses they need for the Marvel One universe.

Curiousily this should also allow the publishing unit of Marvel to begin pursing comics in the X-Men and Fantastic Four spheres once again.  The company has been attempting to push the Inhumans (Whom Marvel owns the film licenses for) as opposed to the Mutants in comics but this has resulted in luke warm reception from many Marvel fans.  The Inhumans tv series has also suffered from horrible reviews and a lack luster fan reception making this the perfect time to shelve the royals for mutants.

While Bloomberg has since reported that the talks are now dead this is likely an overly extreme click bait description.  One important piece of this deal that Bloomberg neglected to take into consideration is that the Marvel rights are Non Transferable to anyone but Marvel/Disney.  These rights then can be either be kept by Fox or sold back.  This greatly limits the value of Fox to outside parties.  SONY for instance can not swoop in and buy the F4 / X-Men rights.  If Fox has decided that they can no longer go it alone in the film industry then one way or another those rights will find their way back to Marvel.  It seems very likely that Fox itself leaked the news in an attempt to increase its own value.  The incentive of Disney/Marvel here is clear but that non transfer clause means that there are not an abundance of investors.  There is Disney or Disney and you better believe that Disney knows that.


"And where we go beyond that? Of course we will go places beyond that. And, of course, we have ideas of where we go beyond that. But, really, it is all good stories. And as the series finale of Star Trek: The Next Generation said, ‘All good things must come to an end.’ And part of what makes them special, there is a finite quality to the best of fictional stories through history. And we wanted to do that at the end of our first three phases and 22 movies. How we start anew and wherever we go beyond that is a story for another time. This is really about 10 years on, bringing something to a head in a satisfying and unexpected way."

This seems clearly like the main Marvel universe will end but something is going to come out of it.  What will it be?  I am betting on the Marvel One.


There are 3 big reasons that the Marvel One Universe could happen:

The Marvel One Film Universe has been the goal of Kevin Feige all along.  Kevin initially was pitching ideas to both Fox and Sony to get them  to unify there film properties before the MCU was a thing.  The first tease of this attempt was the menion of Doctor Strange in Spider-Man 2004.  This is 4 years prior to the release of the first MCU film the Incredible Hulk.  X-Men The Last that came out in 2006 was also meant to make mentions of other Marvel properties.  The talks between Marvel, Fox and Sony eventually failed.  Fox and Sony did not respect the properties that Marvel held.  At the time it appeared that Marvel had really sold off everything and had very little to offer.  Hulk was partially owned by Universal, Iron Man and Captain America were considered lower market properties.  Fox and Sony saw very little reason to deal with each other as well.  The attempt of Kevin Feige to convince the studios of why a united film universe would be better thus failed.

However, lets keep in mind that was then and this is now.  Since 2004 Marvel has managed to become the biggest player on the film block with films starring characters that executives at Fox / Sony had never heard of, and curb stomping the Fox / Sony films.  The characters that have been held at Marvel have become massively more popular, while those in Sony/Fox's hand have deteorated.

Sony's Amazing Spider-Man series was a bust.  Fox has had more success by upping their game with X-Men Days of Future Past, Deadpool and Logan.  However, they also have had duds with Apocalypse not doing as well as expected and the total failure of Fantastic Four.  Fantastic Four is a major problem for Fox.  One one hand it is a huge property that covers a lot of Marvel characters.  On the other hand the studio seems unable to make anything but a flop out of it.  They will need to make another film though or the licenses will lapse and revert back to Marvel.  This situation seems to put Marvel in a postion of strength.

Effectively, Kevin Feige was right in 2004 and it has been proven to the executives at the other companys through the performance of the MCU.  Marvel also strengthened its position by going out and bringing back the properties of Daredevil, Punisher, Ghost Rider, ManThing and Blade.  While, these characters may not be as big as a Spider-Man / X-Men they are still major characters and combined with the full amount of Marvel characters remaining they can help flesh out a universe.  Effectively, since 2004 Marvel has gone from being the toddler whining, to becoming Daddy.  And what does Daddy want?  Daddy wants the kids to place nice TOGETHER.  That is right TOGETHER in one cohesive universe.

Fox/Sony/MCU All need Reboots
There is a reality that actors get old.  This has been an issue that comics have managed to avoid sometimes by stretching out time and also by rebooting universes.  When it seems that continuity has gotten too cumbersome the universe blows up and a new one takes its place.  Ussually, reboots occure in comics about once every 10 years.  The MCU is will be 10 years old when Avengers: Infinity War comes out.  Many of the contracts on the tent pole character actors such as Robert Downey Junior, Chris Evans, Chris Hemsworth and Scarlet Johanson will be up.   Even the newcomer Tom Holland will only have 1-2 more films on his 6 film contract.  The actor contracts seem to mostly end with Marvel Phase 4 films.  These films will likely include:  Doctor Strange 2, Spidey 2, Guardians 3, Ant Man 3, Black Panther 2 and Captain Marvel 2.  After this the universe faces some difficult options but will likely need to find a way to organically bring in new blood to play pivotal characters.  The MCU will need a reboot.
Sony's recent deal with the MCU effectively puts there Spider-Man license on the same life span as the MCU.  When the MCU reboots so to will Spider-Man.
Fox's position is a little more complicated in that it now has 2 generations of actors in roles.  The first generation seem to be finished with the franchise after  Patrick Stewart and Hugh Jackman effectively retire after Logan.  Fox has a couple of more films planned using the younger characters, and also the characters in Deadpool.  Many of these actors will also be about ready to retire though after the universe releases its next 4-5 films.
Effectively, all of the 3 major Marvel film stakeholders will be ready to do something new around 2021.


Super Hero Fatigue and Competition
It is not 2004 anymore there are now a lot of Super Hero films and there are only projected to be more on the horizon.  DC has its own film universe and companies like Valiant are also expected to enter the fray.  All of the Marvel films will need to an adrenaline boost to get through this.  Even the novelty of the MCU itself will have begun to wore off by 2021.  The company's will be faced with both prospects of increasing quality and also of spacing out their films to not cannibalize each other.  This could best be accomplished by working together, creating a single universe, and spacing out the films.  It just makes good business sense.

Will be people get excited about the One Universe?  Ohhhhhhh yeah.  Imagine something where Thanos loses the Gauntlet and then a stranger walks in the room with a metal suit.  He picks up as the camera pans up we see that it is none other than Doctor Doom.  He opens up portals showing different Marvel universes the X-Men, The Avengers, and Spider-Man.  He says I want to rule them,...........ALL OF THEM.  He then merges them altogether.  BOOM the fans will go NUTS!!!!!  I also think its possible for Marvel to expand on Stan Lee's role in ALL of these film universes as the means of merging them altogether.  That would also be pretty cool.