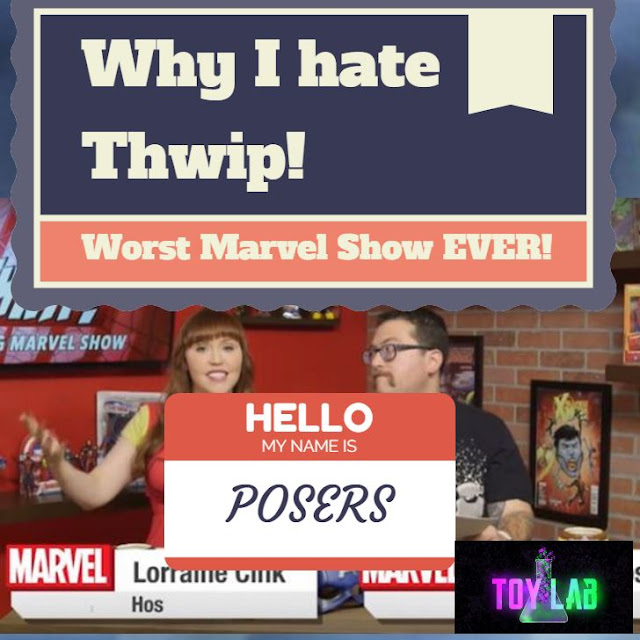 Yes it is supposed to be Thwip the BIG Marvel Show but I changed the BIG to LAME why? Because I hate this freaking show.  Why do I watch it then you ask?  Because I along with every toy, film, and comic blogger HAVE to watch this show in order to know the latest news from Marvel.  That is right this lame, crappy show has the exclusive rights to all kinds of Marvel news.  There is basically no way this show should be able to suck.  Its like making a crappy pizza it should not be possible but somehow they manage to annoy the living F#%# out of me everytime I watch this show.

This morning I kind of lost it.  I watched this crappy video that was meant to be about Thor Funkos but the video was so freaking lame.  My post turned into a rant about Thwip rather than covering the Thor Funkos.  People started asking me......dude whats your problem with this show........dude why don't you watch something else.    Well fine, I decided this calls for special measures time to slip on the brass knuckles and devote a whole post solely to WHY I HATE THWIP!


What is Thwip?
Thwip is a show hosted by Lorraine Cink and Ryan Penagos.  They put on a weekly youtube show that is meant to be a variety show style format that features special Marvel guests and also gives exclusive Marvel news.  Lorraine and Ryan previousily co-hosted live Marvel broadcasts from comic conventions.  Penagos is also the host of This Week in Marvel podcast and Lorraine is a host of This Marvel Minute.  I actually don't hate Lorraine's Marvel Minute, as it is her just reading the corporate Marvel lines with enthuisiasm and she does well at that.  If you are curious the name Thwip comes from Spider-Man's web shooters.  This show is Marvel's "Official" youtube show that they highlight on Marvel.com and on the MarvelEntertainment Youtube Channel.

I could embed one of their videos but screw that.  If you want to see it go on Youtube and search for this garbage yourself.

Why does Thwip Suck?
First lets start out with I am not the only person that thinks Thwip sucks.  Thwip is widely panned.  The comment section of each of their shows is  full of people rolling their eyes.  Further the show gets a very low amount of views for being an official Marvel show.  The reason for this is very simple......the show sucks.  I don't think the Variety show format is to blame, No I blame the hosts.  They are F#%$ing Posers. These guys never offer anything insightful, nothing deep because they know nothing to begin with.  The best they can do is offer spoon fed lines from someone off camera who may or may not know anything themselves.

Everyone gives this show a kind of pass because no one wants to be the dick head that picks on a girl in the geek world and call her a poser.  Well guess what....I am that dick head.  These hosts are complete POSERS.  I don't care if you go to a convention, or enter a store, or wear a costume, but if you HOST THE SHOW that has exclusive access to the subject you are talking about then you should be an expert.  THIS IS NOT THE F#$#ing CASE HERE and its just painful to watch.  When you can walk into any comic book store in the country and meet people on the daily who know more than these hosts.  When you see people passonately grinding their butts off and would love to have this show and then you just see these jokers mail this in.  It kills you.  Part of me really dies as I watch this show.  Its like their dumb goofy faces stick out a straw through my computer screen and start sucking out part of my soul.

These Variety shows fandom programs can be entertaining.   I really like Chris Hardwick's Talking Dead show, sometimes I find that show to be more entertaining than the actual Walking Dead show that precedes it.  Part of the reason here is that Chris is a real nerd, who goes above and beyond to be the most knowledgable Walking Dead fan there is.  He knows the source material, the show, the actors, and even the fans.  He stays abreast of everything!  This allows him to ask insightful questions.  Even though I am a hardcore zombie and Walking Dead fan I never feel like Chris knows less than I do.

There are also a host of Comic/Geek shows I watch and love here is a shout out to a few of them:


All of these shows maybe with the exception of the Nerdist operate with less resources than Thwip.  None of them have the exclusive access of Thwip.  In effect they should all suck compared to Thwip but instead I can tell you that they have put out far superior content.  In some of these cases these guys are putting out these videos from their parent's basement.  These are shows that are nothing but passion projects of their creators, and yet.......they obliderate anything that comes from Marvel.

Why not give one of these grinders a chance to run the exclusive show?  These guys actually earned it.  Just an idea, and Marvel you can use all the ideas you can get.