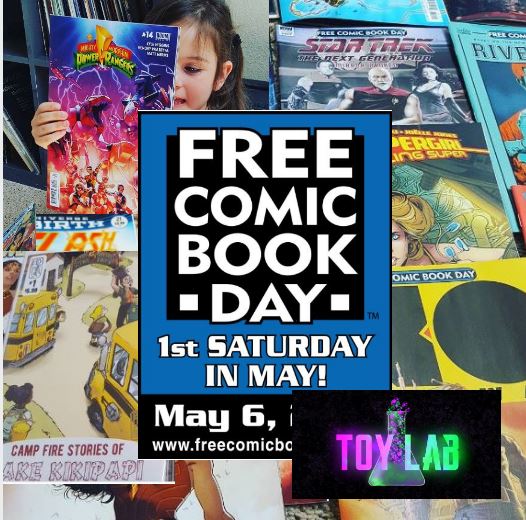 Free Comic Book Day has become like its own major geek holiday and to me its more than just getting free comic books its really about getting the whole geek/artistic community together on a local level and in a more intimate or at least casual level than at comic cons.

When I look back on my day I ran into soooooo many cool people.  As a fan of comics and geek culture I made out like a bandit.  My four year old daughter tagged along with me and we had a blast.  I knew in advance a few books she would want DC Super Hero girls, Power Rangers thats her jam and quickly snagged a few of those.  She also found (by herself actually) copies of the Pink Ranger series which she adores (BTW that series is really cool you should check it out).  Meanwhile, I picked up what I wanted (and more).  We went to a few different stores in the Denver area, I did not make it over to the famous Mile High Jason Street Store that is considered by many to house one of the largest collection of comics in the world.  Mile High Jason Street store I do understand was off the hook.  I did however make it Mile High comics other store in Glendale.

If I had gone to Jason Street I would have seen artist Sam De La Rosa the artist of Venom who was signing issues.


All the stores were fun.  I will say that All Cs and Mile High did a much better job of bringing in local artists, and creators.

I ran into awesome people, I had awesome conversations but here is where I messed up.  I messed up as a blogger.  I did not bring my Toylab business cards, I didn't bring a recorder or a notpad to take any notes.  I also had my young daughter with me which means I had a limited time with each person but holy crap did I meet interesting people.  Frankly folks I f#%#ed up.  I apologize because there are stories and people I met that really deserve better than this.  That said my geek memory is like a super power and I am going to relay as best as I can.

So first of all I ran into some folks from Aurora Rises at AllCs.  I don't remember their names.  Aurora Rises is the group that was founded to help the victims from the Aurora Century 16 shooting that occured at the Dark Knight Rises.  For the record that was my local theater when I grew up and where a few of my best friends worked in High School so that event hit me personally.  The people of Aurora Rises are studs, just F#%#ing awesome people, years after the shooting they are still getting artists together to run auctions and meet ups to raise money for the victims of the shooting long after most have forgetton that it ever happened.  Its not an easy thing to do, and they are grinding at it.  I realized immediatly that I SUCK and should be using my platform here at Toylab to send some eyeballs their way.  Expect to see more from these guys on this site, I very passionately support the work these guys are doing.  For Guardians of the Galaxy 2 they had a showing of the film and a door prize of a Groot sketch by Jason Meents from Meents Illustrated with proceeds going to Aurora Rises Charity.

I also ran into a few local comic book creators and want to take time to plug their projects.

Mike Cervantes came up with his own free preview of his comic that he was handing out at All Cs. I thought that was great marketing.  There is also a free download of his book Scarlet Derby and Midnight Jay available on Kindle through May 10th.  So Kindle users jump on that!  You can follow Mike on Twitter @TheScarletDerby
His comic Scarlet Derby has a Victorian Era feel that I always dig and you can expect a review of it up over the next week.


Talked to Pepper DeLuca a while he was really awesome because my daughter came really close to ransacking his table and he still smiled.  He has a comic out that is written by his husband called Lake Kikipapi.  I read it, and I liked it and will try to get a review of it up.  Be sure to follow Pepper on Twitter @Pepper_DeLuca

X-O Manowar #2 seemed to be sold out everywhere.  More copies were being ordered.  The Hype from X-O Manowar #1 seemed to catch the shops off guard and the owners I talked to were all upping orders of the future issues.  People also seemed to be snatching up the Free X-O Manowar Valiant book.

People were loving on the Batman/ Flash the Button cross over.  This was not just Batman fans this was everybody.  The Lenticular covers were being gawked at by kids and the old people were talking about how awesome this story is and how awesome Rebirth has been in general.  Lots of excitement here and I think it was driving people into stores.

Marvel I had a few conversations about Iron Fist and how the series needed better fight choreography.  A few people poking at me for giving the series a positive review (Thats ok I can take it).  A lot of excitement about Guardians of the Galaxy Vol 2 coming out and the related comics of which there were a lot on hand in stores.  Marvel did a good job of getting some great Guardians books out in time for the movie and those seemed very popular.    I also had a few conversations about Venom and there was excitement for Eddie Brock coming and the way the series is headed.

As far as Secret Empire there was just general apathy.  People seem to be looking past it and waiting for it to be over.  I did not see people hating on the series either, they just all seemed to accept it but not care about it.  For all the gimmiky shock value items added in the series it was amazing to see how very little buzz it had.  I would say that if I distilled the general opinion it would be that the series does not matter because its going to be written out of existence in a month anyways.

It would not surprise me if Marvel's best book for the month ends up being Guardians.

Riverdale talk.  Ran into a few Riverdale fans at comic stores who came just to get the Riverdale comics.  I also saw that the free comic was fetching 10 dollars on E-Bay.  Cool to see new people come into comic stores.  Even cooler when they are checking out.....ARCHIE of all things.  Riverdale has been such a cool comic book show because its kind of an anti comic Comic book show, I freaking love it.  Great stuff and cool book.

The Walking Dead -  I expect to hear more about the last issue.  People just said yeah it packed a doozy.  I think so many major characters have died that at this point nothing would surprise anyone but Rick or Carl dieing.

Be sure to check out my Instagram for pictures of my Free Comic Book Day adventure!  Thank you to everyone who stopped to talk with me, and next I will try to be more professional and less of a jack ass.

#FREECOMICBOOKDAY adventure! We went to 3 stores all great. We enjoyed allcs the best though. Met some great creators, picked up tons of comics it was a great day. Also caught a Pokemon while munching burritos at Chubbys. @Pepper_DeLuca @peppercopia #fcbd #fcbd2017 #thebutton #batman22 #valiant #xomanowar
A post shared by Toylab (@toylabhq) on May 6, 2017 at 1:54pm PDT