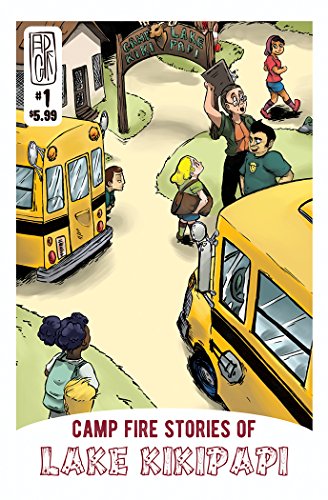 On Free Comic Book Day I had the privilige of meeting some awesome folks and check out their stuff.  One of them was Pepper DeLuca and his comic Camp Fire Stories from Lake Kikipapi.  Lake Kikipapi is a comic that was written by Pepper's husband, while he did the artwork himself.  It is based off of real experiences of staying at summer camp and the associated fun and mystery that comes from kids entering the great outdoors and getting away from their parents.

Every kid hopefully gets to have the experience of going to a summer camp or at least camping and sitting around the campfire to hear ghost stories.  I certainly have fond memories sitting around hearing spooky yarns around the camp fire. Afterward walking back to my tent or cabin in the dark and getting even more scared as every shadow in the woods takes on the shape of the creatures from ghost stories.   This is one of the aspects of the summer camp experience that Lake Kikipapi mines into to flesh out the camp's setting.  The one difference is that in Lake Kikipapi some of those ghost stories turn out to be real.

Summer camp is like a real life adventure where kids get to go somewhere magical and also meet an array of unique characters.  There are edgy counselors, a massive array of kids, the pretty girl, the cool kid, the weird kid, the clown, the kid with a mustache, the gullible kid, the genuis, the nurse who seems nice but might be on too much prozac and every camp has a crazy lunch lady.  Artist Pepper DeLuca does an amazing job of giving each character in the comic a sense of uniqueness so that the summer camp feeling of meeting this huge array of individuals is captured.  Its really impressive in part because he is not using a hyper realistic style of art.  Generally, the farther art moves away from detail the more universal the image appears.  The smiley face could represent everyone but the Mona Lisa could only be the Mona Lisa.  DeLuca's art seems to avoid this paradigm he is able to make his characters feel like individuals while using a minimal amout of lines.  It maintains the fun, and attractiveness of a cartoon while also adding the depth and vibrancy of the motley cast of characters that find themselves in Camp Lake Kikipapi.

DeLuca also adds to the series with his map of the camp.  I am completly a map geek. I think maps are a great way to make the geography of a place into a character itself.  Pepper made a very cool map of Lake Kikipapi and you can see little details of where the current stories take place as well as future stories might go.  Once again he balances the detail level of creating unique and fun areas while also maintaining the fun that comes from a cartoon style of art.

The story of the book involves the camp getting around the campfire to hear a ghost story.  This time though a counselor pulls out what could be a prop.  An old book that he claims he found full of old stories. The story he tells is that of a boy whose disrepect of nature earns him the wrath of a vengeful spirit.  While the kids laugh off the story, there is a hint that the story may be more real than any of them realize.  Leaving the reader to wonder what is this mystery book found by counselor and what further mysteries lurk in Lake Kikipapi.

Stay tuned for more Lake Kikipapi and the DeLuca's I hope to get some interviews with them up over the next couple of weeks.

Read Lake Kikipapi for yourself:
You can buy and download a Kindle version of the comic on the link below.  Toylab is a member of the Amazon Affiliate program and is able to bring you direct links to the best Amazon deals like this one.  If you have a camping trip or are going to Summer Camp this would be a really fun story to bring.  You could read it your tent or even around the campfire itself.

Craig “Pepper” DeLuca is a Colorado based freelance artist that does comic and concept illustration. Growing up Pepper has been influenced by the occult, ghost, witches, and more. Main inspiration from his childhood was, The Addams Family, Munsters, Twilight zone, and Groovy Ghoulies. Accompanied with probably over a million cartoons made for an amazing way of looking at illustrating comics and ideas. The last project that was completed was for Sheath comics a Colorado Springs based publisher for “My Ghost Story”. Pepper’s current project is “Camp Lake Kikipapi” combining campfire stories with a summer camp that seems to mysteries of its own along with the town next to it.

Free Comic Book Day Post
Talked to Pepper DeLuca a while he was really awesome because my daughter came really close to ransacking his table and he still smiled.  He has a comic out that is written by his husband called Lake Kikipapi.  I read it, and I liked it and will try to get a review of it up.  Be sure to follow Pepper on Twitter @Pepper_DeLuca