There was a scene in Agents of SHIELD episode "No Regrets" (Season 4, Episode 18) that really made me think about one of the most iconic comic sequences ever created.  Beware its hard to discuss this without Spoilers.

I often hear the debate of whether film can do the same things Comics can as an art form.  Alan Moore has become famous for saying that he is not for his comic stories being translated to film at all because there is no way they can capture the essence of what he was doing in comic form.  I often think that film does a fine job of translating the material but every once in awhile something does strike me where I say that scene did not capture the comic at all.
There are also times where I find something in a comic and realize that Moore is right that this comic can not be made into film.  It would totally lose its meaning and its sense of being.  I was struck by this thought after watching the death of the Patriot in Agents of SHIELD.  Agent Mace dies in the scene holding up a building and struggling beneath the immense weight.  Its a heroic death and a fine scene but it immediately drew a parallel in my mind with a similar Comic scene from Spider-Man #33.  In no way did the Agents of SHIELD film scene come close to the scene as depicted in Amazing Spider-Man #33.  I think a lot of people have knee jerk reactions to Alan Moore's comments and think that he is an arrogant prick but moments like these help me understand where he is coming from.

Let's take a look at Spider-Man #33 so you can understand what I am talking about.

The sequence was likely not meant to be much.  Stan Lee had given Ditko some very basic plot points about Spider-Man becoming trapped in rubble and freeing himself.  That basic plot point however became a masterpiece in the hands of the talented Steve Ditko.

Ditko draws the first panels of the comic as small, and tight with Spider-Man crushed beneath giant machinery.  These small panels give the reader a feeling of abject claustrophobia and also add weight to Spider-Man thoughts as an immense weight lays over him.    Slowly Spider-Man draws forth inner strength and pushes up against the rubble.  He finds strength thinking of the lives of his Aunt May dieing if he is unable to life the weight.  As he does so the panels get larger once again artistically creating the feeling that he is creating space. 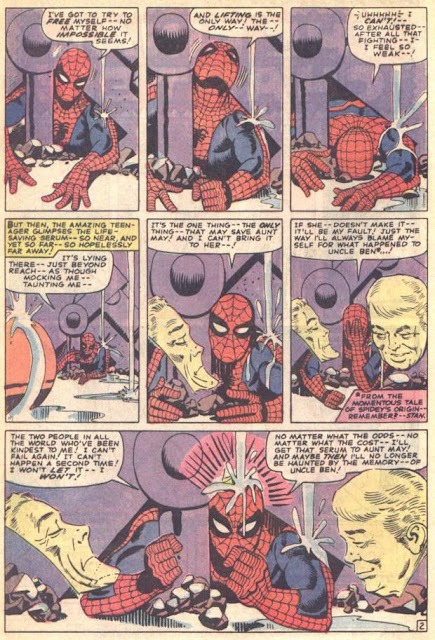 The next page backs out to show how small he is compared to what is on top of him.  Then the panels enlarge in the next row slightly to show him making headway in lifting the weight.  The use of panels here helps create the feeling of strain, and tension in Spider-Man's body.  Note this is not done through words or images but through the use of Panel size and seque
The bottom row shows Spider-Man reeling in pain but continuing to lift, the panels grow slightly larger again. 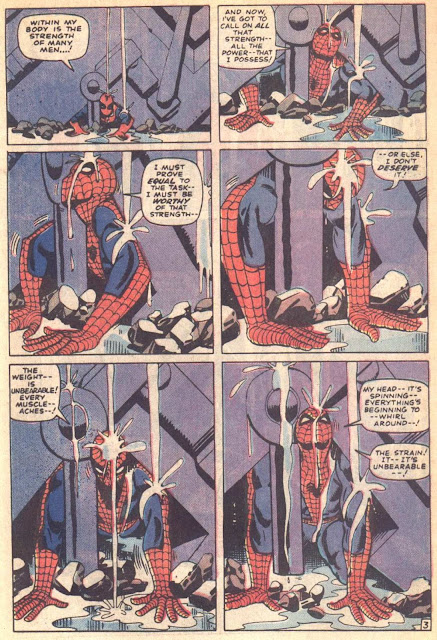 The panels continue to enlarge, however the great strain of Spider-Man is still shown in each image.  In the bottom panel Spider-Man finally gets his legs underneath him.  He says:

Note that while the words add to the comic and add depth to what is going on in Spider-Man's mind that they alone do not create the feeling in the scene.  The weight of the scene is still with the panel structure. 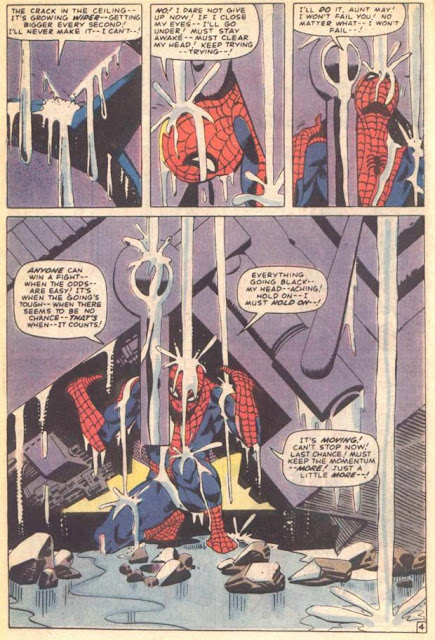 Now for the final Panel.  The Triumphant Spider-Man holding the machine high.  Even posting the exact pictures does not duplicate the sense of the sequence of this panel.  You need to imagine turning the page and being struck by this image after seeing the previous sequences.

This image by itself is great, classic Ditko artwork that shows strength and movement being done way too simply and efficiently.  However, its effect on the reader is massive and that is not accomplished without the previous sequence of pages.

When this full sequence runs you can feel yourself breath differently.  You get the sense that you can breath and their is open air after being smothered in the previous pages.  You are flooded in relief, in achievement and Triumph.  Light and air pour in from the darkness.  There are very few things in artwork that can do what these few pages of a comic do.  For that reason I have sat and pondered them at length, rereading them again and again, trying to uncover the Ditko secret sauce.  Trust I am not alone in doing this.  This may be the most studied comic artwork in history.  It is the comic world's Mona Lisa. 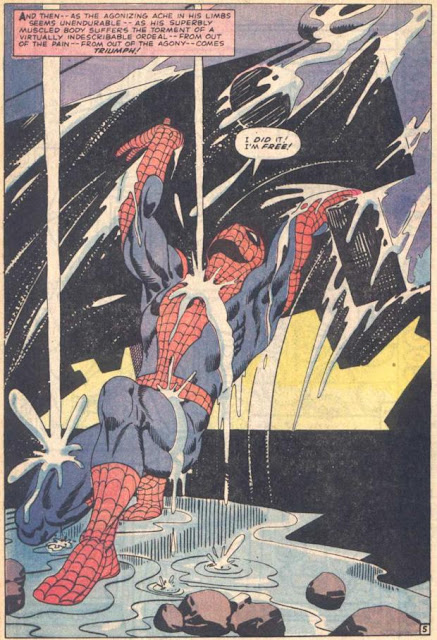 Now after reading this I urge you for the case of enlightenment to rewatch the episode of No Regrets from Agents of SHIELD and contrast and compare the scene of the Patriot's death with this.

The Agents of SHIELD scene is good, The Patriot dies but does so triumphantly while saving people.  The event impacts Agent May who begins to question everything.  For all that though, it never created the feeling in me that this comic by Ditko did.  My breathing was not altered, I did not grimace at the sense of weight.  This is the case of a comic doing something that film still can not do.

Once again I feel lucky to have read something like Amazing Spider-Man #33 and feel a bit sad for all of those who have not.