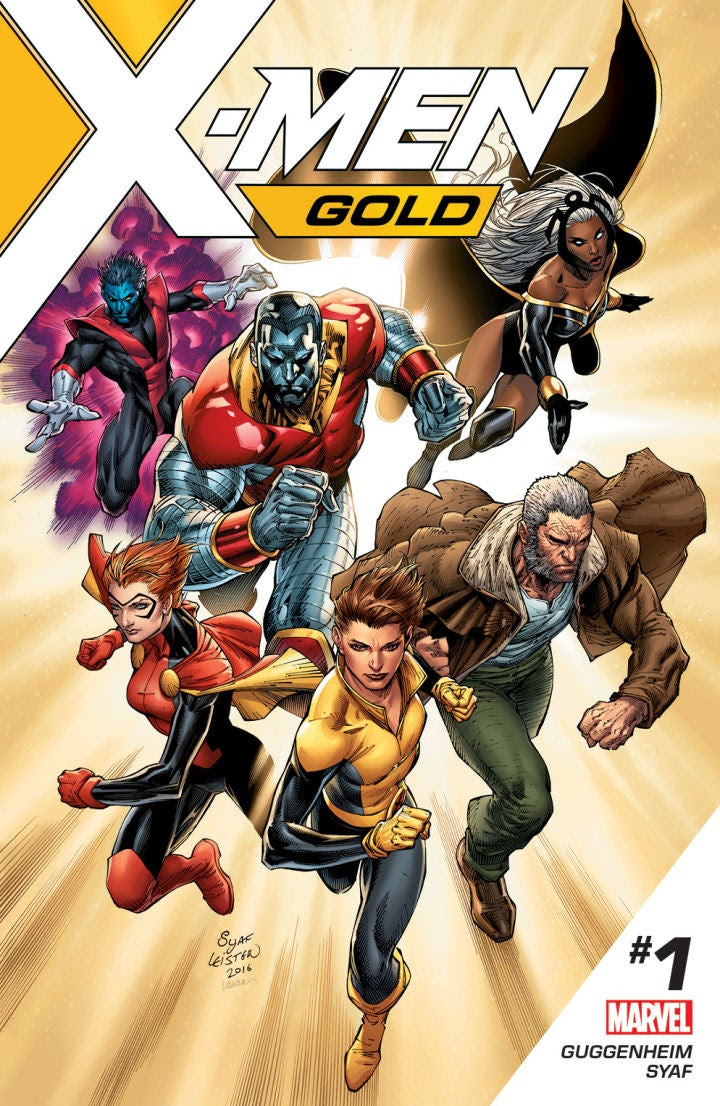 X-Men Gold #1 is literally flying off of the shelves right now and has already increased in value 2-3 dollars in the after market on E-Bay.  The reason for this may surprise people.


Update 4/11/2017-
Collectors are going nuts prices for X-Men Gold #1 and its variants have shot up in value.  Scrolling through E-Bay it looks like the regular first print version of X-Men Gold which seems to be sold out everywhere is going between $10 and $50 dollars.  I did see a few on there for a $100 but I think that is an anomaly.
Most variant covers are going from $20-50
The Premiere Variant of which there are only 1-2 of per store are fetching upwards of a $100 and I have seen them listed for up to $500.  The difference in this cover to the main one is slight it simply has a different bottom right corner. 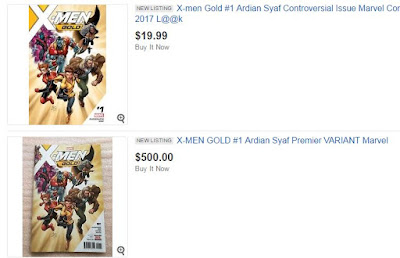 I have an original copy and the Fried Pie Variant which I dig.  The Fried Pie variant has Wolverine / Old Man Logan cutting up a pie.  This variant is going for around 20-30 on Ebay so far its not as crazy as the Premiere Variant.

Marvel response:
Marvel says they will discipline Syaf after inserting the images without their knowledge.  I do no believe Syaf is an actual employee as Marvel tends to use contractors for artwork so they can not fire him.  Marvel goes on to say that disciplinary action (Not mentioned what) will be taken.  Syaf has also already done the artwork for X-Men Gold #2.  All subsequent printings of X-Men Gold will not feature the controversial artwork.

"These implied references do not reflect the views of the writer, editors or anyone else at Marvel and are in direct opposition of the inclusiveness of Marvel Comics, and what the X-Men have stood for since their creation,...This artwork will be removed from subsequent printings, digital versions, and trade paperbacks and disciplinary action is being taken."

“My career is over now,” ...“It's the consequence what I did, and I take it. Please no more mockery, debate, no more hate. I hope all in peace. In this last chance, I want to tell you the true meaning of the numbers, 212 and QS 5:51. It is number of JUSTICE. It is number of LOVE. My love to Holy Qur'an ... my love to the last prophet, the Messenger ... my love to ALLAH, The One God."

Original Post:
The comic of X-Men Gold is kind of a big deal as it begins what Marvel hopes to be a major reset for both the X-Men and perhaps the entire Marvel universe.  It is meant to be the vanguard door opening book for a back to basics approach.  The X-Men in particular have become very muddled with Marvel's force feeding of the Inhumans.  The use of the Inhumans has done neither group favors as far as telling of good stories.

First let me say the comic is good.   It has good art (More on that later) a short but fun story and resets the X-Men in an interesting spot.  The characters on the team really work well together.  I was not sure if I was going to care for Marvel Girl now using the name Prestige but I did.  Kitty Pryde is also really interesting as the leader of the team and scenes showing her bear the weight of Xavier's legacy set up what is going to be a strong them throughout this run.


None of that though is why this comic is selling so fast.   The reason is that once the comic hit the shelves keen eyed fans in Indonesia realized that the comic had hidden anti-christian and anti-jewish (Anti anything but Islam) messages.

212 is prominently shown in the background of one of the pages.  This occurs as Kitty Pryde a Jewish character takes her first shot at calming down the crowd as the leader of the X-Men.

212 references a series of hardline Islamic rallies that have occurred in Jakarta, Indonesia on December 2nd (2016) and February 21 (2017).  There have so far been two of these rallies.  The purpose of the rallies was to attack Ahok (Basuki Tjahaja Purnama) the Christian Governor of Jakarta.  The problem that the movement had with Ahok is that he is not Islamic and they do not believe that Islamic people should have a non-Islamic leader.  There was a more moderate Islamic counter argument that the Quran specifically calls out and elevates Jewish and Christian faiths and that a leader of these faiths would be theologically ok.

Ahok drew further attention to the Koran by calling out a specific passage verse Al Maidah 5: 51 that states:

English Translation:
“O you who have believed, do not take the Jews and the Christians as allies. They are, in fact, allies of one another. And whoever is an ally to them among you – then indeed, he is one of them. Indeed, Allah guides not the wrongdoing people.”

Basically no Muslim should ally themselves with Christians or Jews lest they not be considered Muslim anymore by God.

The Indonesian Translation seems to really flat out say that Islamic people should not accept a Christian or a Jewish person as a leader/ruler.  I don't speak either Arabic or Indonesian so I am going off what I have read here.

At any rate the 212 movement did not appreciate a Christian calling out something in Quran and thus created a rally to throw him into jail.  Christians, Jews and certainly not other faiths apparently have the right to discuss the Quran according to the 212 movement.

The other number hidden throughout the crowd that is standing up to Kitty is 51.  51 appears prominently on one man's chest and on another's hat.  The 51 references the verse Al Maidah 5: 51 verse that states that people should not be led by Christians or Jews.

As if that was not all bad enough there is still another message hidden in this same panel.  Right to the left of Kitty Pryde's head is the sign for a Jewelry Store.  However, her hair is cutting part of the word so it most prominently shows "Jew" effectively tagging Kitty Pryde as Jewish.


Another picture features Colossus playing baseball wearing a shirt with QS 5:51.  Once again this is going back to the verse Al Maidah 5: 51.

These messages were all hidden in the comic by artist Ardian Syaf himself an Indonesian Muslim who said he added the symbols after attending one of the 212 rallies apparently inspired with the intolerance there and decided to add it into the X-Men who are generally considered the comic worl'd symbol of tolerance.  To my knowledge Marvel has not commented on his work status but I highly doubt he ever works for Marvel again.  At least not without someone scrolling through every number he has drawn to see if he hid any Quran verses there.

Marvel was made aware of the symbols but not until after the first printing had shipped.  Marvel has said that they are removing the symbols from any further release of X-Men Gold.

Perhaps ironically, this makes the first printing release of X-Men Gold worth even more as there will be fewer of them with this original iconography.  This has made many collectors snatch up copies of what was already a hot book.