Who is Valkyrie (Marvel)? 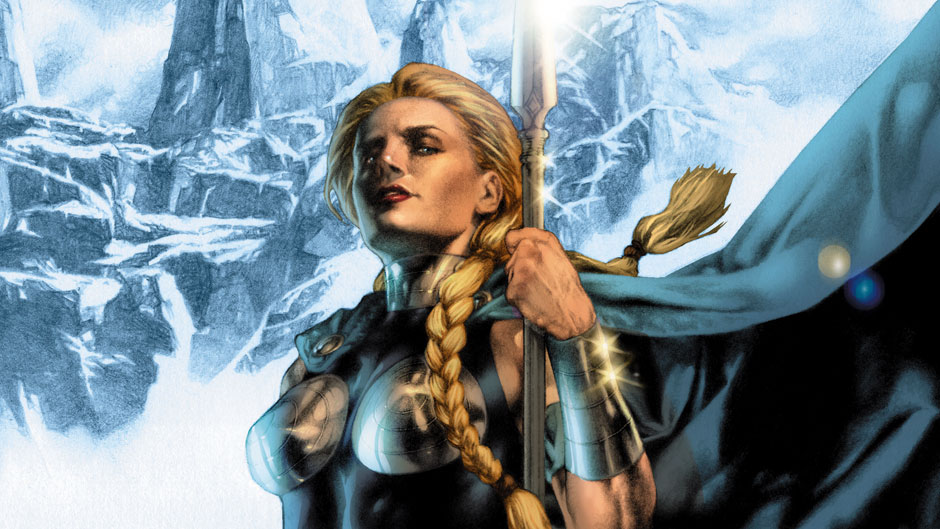 Valkyrie is an Asgardian warrior that is chosen by Odin to lead the group of warriors known as the Valkyior.   Valkyrie has made many appearances in Thor comics and as a member of the Defenders.  Valkyrie will appear in the film Thor: Ragnarok and be played by actress Tessa Thompson. An Asgardian warrior named Brunnhilde was chosen by Odin king of Asgard to lead the Valkyior to choose the slain mortal warriors and take the worthy to Valhalla. Brunnhilde did the work of Valkyior for many centuries.

Brunnhilde had a falling out with Odin. Odin ordered the dead of a man named Siegmund who was actually the mortal form of Odin's son Thor. Brunnhilde realized that Odin did not actually want Thor / Siegmund killed and instead sought to protect him. Siegmund was killed by Odin any way and for her defiance Odin removed Brunnhilde powers and immortality. Brunnhilde then lived as a mortal. She became loves with Siegried who was the son of Siegmund and also a mortal incarnation of Thor like his father. The two fought many great battles but eventually Siegfried was killed and in her grief Brunnhilde tossed herself into his funeral pyre. Odin restores both Brunnhilde and Thor to their Asgardian forms and also erased the mortal events of Siegfried from their minds.

Brunnhilde returned to her work of selecting the slain from battlefields until a pact amongst the pantheon of Earth gods and the Celestials was struck. The pact forbade interference with Earth from the gods and thus the Valkyior were to no longer select warriors from Midgard. Instead they were limited to the war dead of Asgard. This meant there were very few warriors for Brunnhilde to select from and she bitterly began looking for something better to do.

Brunnhilde was tricked to joining forces with Amora the Enchantress who offered Brunnhilde a new life as an adventurer.  After Amora was revealed to be a villain, Brunnhilde sought to end their partnership but Amora was ready for and captured her essence in a crystal.  Amora would use Brunnhilde as a source of power and bestow it upon her self or other lackeys.  For many years Brunnhilde remained trapped in this state.

Brunnhilde was angry with Odin and Asgard for leaving her trapped in a crystal for centuries and so set out on her own journey as an adventurer. She joined with the super hero group the Defenders. She helped battle the super powered Moondragon. After Moondragon had been defeated Odin put Brunnhilde in charge of watching over her and teaching her humility. Moondragon reformed for a time but eventually succumbed to the Dragon of the Moon. Brunnhilde was given additional powers by Odin and joined by her fellow Valkyries who defeated Moondragon. In the end they failed to capture Moondragon and the two went separate ways.

Eventually, Brunnhilde joined a new super hero team tame called the Secret Avengers. She goes on a secret mission during the Siege storyline to banish the hammers of the Worthy forever. In Monsters Unleashed she joins with Hippolyta in battling giant monsters in Edinburgh.

Powers:
Valkyrie has the powers of all Asgardians of:
Valkyrie is considered to be the strongest of the Valkyior the great warriors of Odin.  Appointed by Odin the warriors known as the Valkyior gave Valkyrie the ability to take spirits/souls to their proper place in the underworld.

She also has a magic sword named Dragonfang and a flying horse named Aragorn.

Valkyrie will appear in the film Thor: Ragnarok and be played by actress Tessa Thompson.